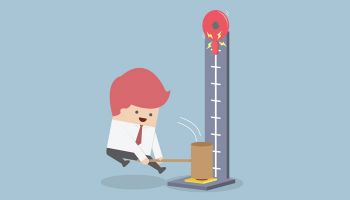 Banks' net interest margins increased in the fourth quarter of 2015, rebounding off the lows witnessed early in the year, but many observers believe increases in short-term rates will be necessary for further expansion to occur.

The low-rate environment, relatively slow loan growth and competition for credits pushed bank margins below 3% in the first quarter of 2015. Margins rebounded in the remaining nine months of the year as the pressure on earning-asset yields moderated, while banks reduced interest-bearing balances due and put those funds to work in their loan portfolios.

Commercial banks' fully taxable-equivalent net interest margin rose modestly to 3.08% in the 2015 fourth quarter from 3.03% in the linked quarter and 3.07% a year earlier, according to S&P Global Market Intelligence data.

Margins benefited modestly from the Federal Reserve's decision to finally begin raising short-term rates in mid-December 2015. While the rate hike came late in 2015, LIBOR began increasing the last week of November 2015, and continued climbing leading up to, and following, the increase in short-term rates. Still, most market watchers believe that further rate increases will need to occur for margins to expand further.

"[A] recovery in net interest margins today will entail further Fed rate increases, which we believe are still on the table, but look to be pushed out," Keefe Bruyette & Woods analyst Frederick Cannon wrote in a Feb. 19 report. 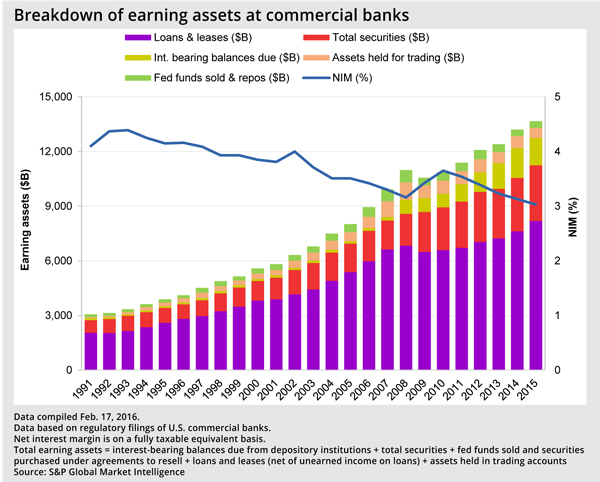 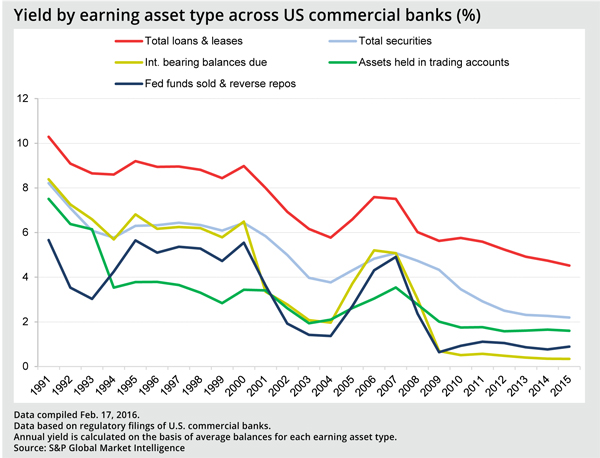 Uncertainty has increased in the markets as investors worry that weak commodity prices and a global economic slowdown could push the U.S. economy into a recession. Hovde analyst Joe Fenech underscored that cloudy outlook recently, when adjusting EPS estimates and price targets for banks in his coverage universe to reflect emerging macro developments, including the possibility that short-term rates will not increase as much as many market watchers previously hoped.

"While we think we were already less optimistic than most on the projected benefit to NIM we were likely to see in 1H16, clearly, we had some benefit from rising interest rates factored into our modeling for 2H16 and into 2017," Fenech wrote in a Feb. 22 report.

Fenech continued: "Now, the reason we aren't taking more drastic action yet is that the outlook is still uncertain. For instance, recent geopolitical developments could be overblown, energy prices could quickly rebound (and with it, the perception of the state of the U.S. economy), and the Fed might then feel justified in continuing in its attempt to "normalize" short-term market interest rates." 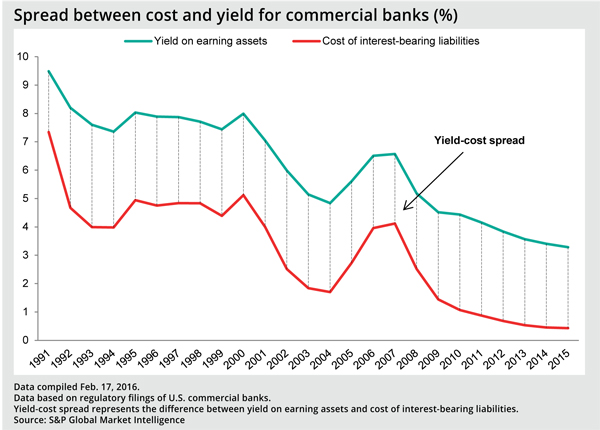 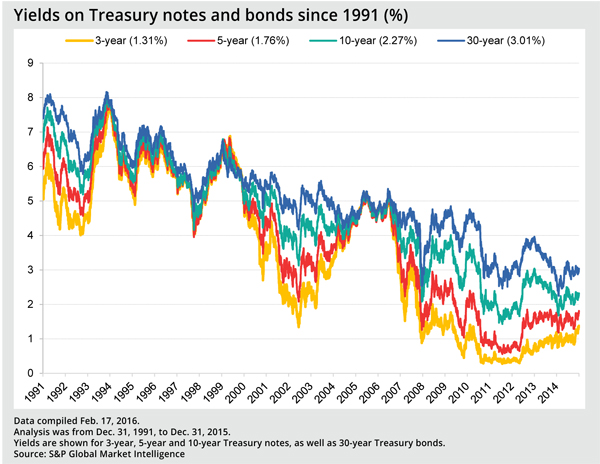 Many banks likely would welcome additional increases in short-term rates. The initial rate hike by the Fed in December 2015 has already offered a boost to some banks. United Community Banks Inc.'s saw its margin expand in the 2015 fourth quarter, rising to 3.34% from 3.26% in the linked quarter and 3.31% in the year-ago period. The company's loan yield rose 6 basis points to 4.22% in the 2015 fourth quarter from 4.16% in the preceding quarter, while its investment securities yield climbed to 2.29% from 2.13% in the linked quarter.

Still, some bankers acknowledged on their respective fourth-quarter 2015 earnings calls that they will need to see additional increases in short-term rates to move margins higher in 2016. Synovus Financial Corp., for example, said on its call that if rates do not move higher by 25 basis points both in June and December this year, the company will experience some "modest" margin pressure in the second half.

Synovus reported a net interest margin of 3.18% for the final three months of 2015, up from 3.14% in the linked quarter, but down from 3.34% a year earlier. The company noted that its yield on earning assets rose 3 basis points in the quarter, but also said that average balances at the Federal Reserve dropped $292.8 million, or 22.8%, helping lead to margin expansion. 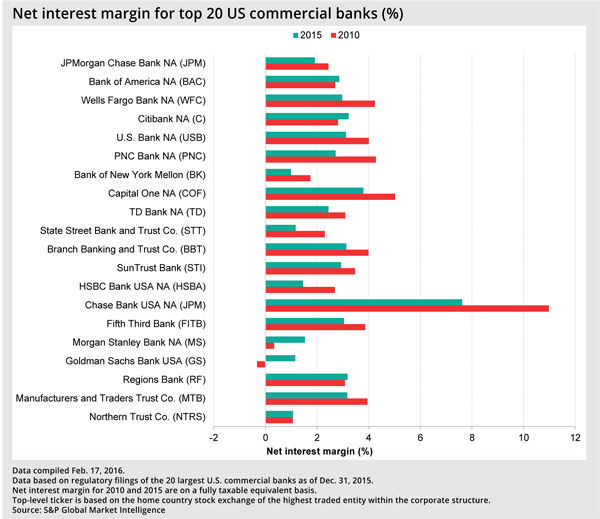 Many other commercial banks followed suit, decreasing the amount of interest-bearing balances due from other banks. S&P Global Market Intelligence data shows that interest-bearing balances, which carry relatively low yields, fell to 10.97% of commercial banks' earning assets in 2015 from 12.44% in 2014. Loan and leases, which carry far higher yields, meanwhile, became larger portions of bank balance sheets, rising to 59.89% of average earning assets in 2015 from 57.71% in 2014.

Commercial banks' loan yields continued to fall in 2015, reaching 4.52%, down from 4.74% in 2014. The institutions' yield on securities held up better, dipping just 6 basis points to 2.20% from 2.26% in 2014. Funding costs also continued to trend downward, with the cost of interest-bearing liabilities dipping to 43 basis points from 45 basis points a year earlier.

The relative growth in loans was certainly welcomed at commercial banks, given that the industry has not received much in the way of rate relief. Absent further increases in short-term rates, many observers believe banks will need to continue reporting stronger loan growth to see margins expand in the remainder of 2016.