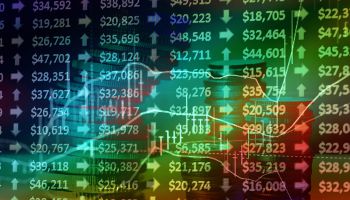 As the third quarter comes to a close, decreases in long-term rates should leave banks' bond portfolios in the black but should also create some reinvestment risk.

Banks have taken action to shield their bond portfolios from changes in interest rates, increasing the amount of securities in held-to-maturity, or HTM, portfolios.

Those moves have offered institutions some protection from market fluctuations since unlike available-for-sale, or AFS, portfolios, HTM portfolios are not subject to mark-to-market adjustments on a quarterly basis.

What’s going on in AFS portfolios

However, despite the efforts, lower long-term rates can present some reinvestment risk for the cash flows kicking off bond portfolios.

Volatility in the markets has led to significant swings in the values of banks' AFS portfolios over the last year. Those portfolios were in negative territory in the fourth quarter of 2016 and first quarter of 2017.

The Federal Reserve's H.8 release, which tracks all commercial bank balances, shows that the group of institutions began reporting net unrealized losses the week ended Nov. 23, 2016, just weeks after the election. The tide turned in May 2017, however, as long-term rates began to decline from their recent peak. 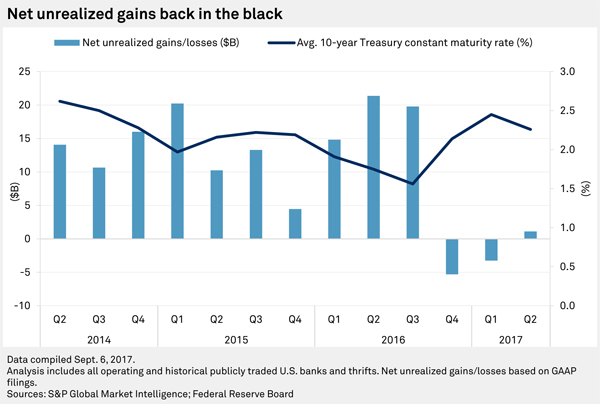 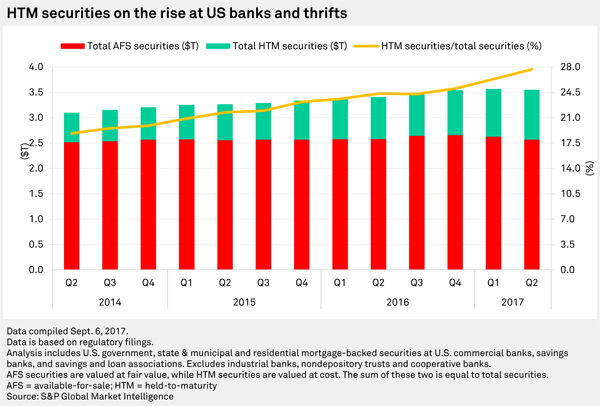 Long-term rates have fallen further since then, pushing the yield on the benchmark 10-year Treasury to as low as 2.05% in recent weeks. That is down considerably from the 2.45% level reported at the beginning of the year and 2.62% reported in March. Rates declined as investors employed a risk off trade amid growing tensions with North Korea and the continued policy uncertainty coming out of Washington, D.C.

Falling rates pushed unrealized gains to $7.1 billion as of Aug. 30, according to Fed data, suggesting that those portfolios could close the third quarter firmly in the black.

While unrealized gains and losses do not actually impact earnings, mark-to-market adjustments in AFS portfolios flow through accumulated other comprehensive income and impact tangible common equity. Banks have sought to mitigate the impact of changes in market valuations on their book values, particularly as rates were expected to rise, through an increased reliance on HTM portfolios.

Banks have nearly doubled their HTM portfolios in the last three years as they have reacted to new capital and liquidity standards and prepared for higher interest rates. Much of the increase in HTM portfolios came as long-term rates declined to historically low levels that many institutions believed were unsustainable.

Even with the more recent decline, long-term rates remained above the lows touched less than a year ago. The threat that raising rates could pose to banks' securities portfolios has become even more pronounced for institutions with more than $50 billion in assets, which are subject to the liquidity coverage ratio, or LCR. That provision requires them to hold higher concentrations of market-sensitive securities such as Treasurys and Ginnie Maes.

Other regulations have caused banks to be more wary of swings in the market and the impact changes in values would have on their balance sheets. The originally proposed Basel III rules in the summer of 2012 required accumulated other comprehensive income to flow through regulatory capital at all banks. A year later, the final Basel III rules allowed non-advanced approach institutions, generally those with less than $250 billion in assets, to opt out of that provision.

Designating securities as held-to-maturity, however, cannot protect banks from reinvestment risk that has emerged as rates fell further. The recent decline in long-term rates leaves banks with lower yielding opportunities to reinvest the cash flows generated from their portfolios.

If rates remain at their relatively low levels, banks could face pressure on their security yields.