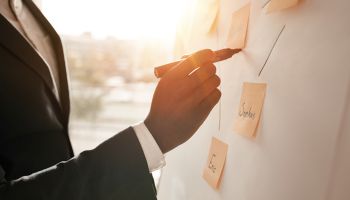 2018 may see some baseline issues change for some banks. Do some "what ifs" now, advises Vincent Clevenger of Darling Consulting Group, and you might avoid some nasty surprises.

“We can only see a short distance ahead, but we can see plenty there that needs to be done.”—Alan Turing

Alan Turing will be remembered in history for helping the Allies decipher the German Enigma code during World War II. In fact, Winston Churchill asserted that his work likely shortened the war by two years. Turing’s story was made famous in the movie “The Imitation Game.” Today, he is widely considered the father of modern computing.

Turing was not a banker, yet this quote is certainly appropriate for balance sheet managers as they commence their annual budgeting exercise. We all wish we had a crystal ball or a Turing machine to predict the future. But in reality most projections are based upon data points which only tell part of—and not the entire the story.

So, as bankers start to “put pencil to paper” and do their best to project the financial welfare of their organizations for the next fiscal year, here are four key considerations:

1. What if the yield curve continues to flatten?

Did you know that during the last five tightening cycles by the Federal Reserve the spread between the 2-year treasury and 10-year treasury went to zero at one point?

While history doesn’t necessarily repeat itself, it certainly appears as if the yield curve is positioned to flatten from current levels. This carries significant ramifications for future levels of net interest income.

While most intuitively understand that reduced slope leads to lower returns, the pain hasn’t necessarily been realized at most institutions because deposit costs have continued to lag the corresponding Fed rate increases. In other words, the cost savings associated with lagging deposits is likely to erode if the Federal Open Market Committee continues on its higher-rate path. For some banks, the savings versus assumed “betas” embedded in their models is enormous. The cost to “catch up” can be onerous.

It’s entirely possible that some banks will “make budget” in 2017 solely because budgeted deposit pricing increases never came to fruition. What is the likelihood of that occurring again in 2018? (Now is also the time to alert your board of this potential phenomenon).

The asset side of the balance sheet is also unlikely to provide any relief. The thirst for assets yielding greater than 4% is insatiable in the industry, and the long end of the yield curve isn’t necessarily helping matters.

It’s no secret that commercial loan origination rates have barely budged over the past few years. Accordingly, assuming a parallel rise in interest rates (and a commensurate rise in loan and bond yields) could produce significantly different results than if yields remain anchored at current levels.

The good news is that flat yield curves don’t last forever. But is 2018 the year we lose the slope (or what remains) from the yield curve? Accordingly, it’s imperative to understand how your bank’s budget reacts to a flattening yield curve environment.

2. How much will liquidity tighten?

It’s no secret that the regulatory community has re-focused its efforts on liquidity risk management during recent examinations. The combination of potential deposit runoff (by-product of higher competitive market offering rates) and continued asset growth has resulted in increased “reliance” on wholesale funds at some banks. And with Loan-to-Deposit and Non-Core Funding Dependency ratios increasing, the regulatory world has taken notice.

“On balance sheet” liquidity ratios—the combination of cash and marketable securities—have been scrutinized closely in this recent cycle. In fact, some folks have been “told” to keep this ratio north of 7%-8%. Obviously, the carrying cost of excess liquidity is high and therefore some banks operate at leaner levels.

How does this fit into budgeting in 2018?

The time to know everything possible about your best customers is now! We are potentially on the verge of seeing a migration of deposit balances away from bank balance sheets. In certain markets, it’s already a reality.

The bankers who experienced deposit “growth” after the recession may wake up this time next year wondering where these same customers went.

Now is the time to ask some very specific questions:

• Are balances increasing or decreasing?

• How many accounts do these customers still maintain with us?

• What is the nature of their relationship with the bank?

• What rates are we paying them?

• Is rate the reason those balances are still in the bank?

I’d also look at balances that are waving the red flag. These relationships exhibit consecutive months of declining balances. Often, the depositor doesn’t just walk through the door and ask for their balance back (which would give the customer service representative an opportunity to intervene): instead, it’s a prolonged exodus. I’d want to understand why this is occurring.

From a budgeting perspective, it would be invaluable to quantify the marginal cost of conversion associated with deposit promotions offered during the past 12 -18 months.

• Do we know the “whereabouts” of the new relationships garnered from those products?

• Is our deposit growth attributable to new depositors?

• Or is it attributable to garnering a larger share of wallet from our existing customer base?

Does your team know these answers?

The best customers are often the ones you already have. Figuring out how to make that existing relationship more meaningful is how many banks continue to grow their core deposit base.

A bank’s ability to mine the data residing in its deposit base will determine its ability to manage deposit costs and thereby impact profitability. With liquidity tightening and regulators taking notice, banks would be wise to take a serious look at their deposit gathering and retention strategies in 2018 to best forecast growth figures.

3. Liability extension … is it worth it?

With rates projected to move higher, is now the time to extend your funding base? Or, do you continue to “play chicken with the FOMC” into 2018?

Before making that determination, consider some recent analysis performed by one of my colleagues. His research sheds some light on this predicament. He compared rolling short-term advances (1-month) at FHLB Boston to term funding (5 year Bullet advance) back to 1994. The math is heavily in favor of rolling short.

For example, terming out 5 years beat rolling 1-month advances from a cost perspective only 2% of the time (104 instances out of over 5,000).

And, during those times it “won” to extend five years, the average savings was 33 basis points a year (versus overpaying by 221 basis points per year when extending “lost”).

This really shouldn’t come as a surprise, considering that we have been in a 40-year bull market for bonds.

Keep in mind that this analysis becomes murkier if you decide to extend into shorter terms (i.e. 2 and 3 year advances).

Despite your personal rate bias, the inherent sensitivity of your balance sheet should always dictate strategy.

The first question budgeting teams need to answer is: Do higher rates threaten profitability (and for how long)? Also, if rates increase at the FOMC-preferred “measured” pace, does your asset cashflow recycle quickly enough to allow NII to recover? If so, should you be entertaining intermediate term extension?

If you believe that the yield curve is destined to repeat its flattening tendencies, the answer would be to buckle up and enjoy the ride up with the FOMC.

After all, we have ridden out four rate increases thus far, why panic now? But if your profitability is threatened, you may not have a choice.

4. Could derivatives become our friend in 2018 and beyond?

For years, banks had essentially been limited to engaging in cash-flow hedges. However, new standards from FASB will more easily allow banks to execute fair-value hedges. This is a welcome accounting change which gives bankers another tool to manage Interest Rate Risk on their balance sheets.

Briefly, a liability-sensitive bank with a high concentration of longer-term fixed-rate mortgages could enter into an interest rate swap (Pay Fixed/Receive Variable) by designating a “pool” of those mortgages versus the notional amount of the swap.

If, at maturity, the balance in the pool designated by the bank at the inception of the swap remains greater than the notional amount of the swap, then the theoretical gains or losses in either the swap or value of the loans are neutralized and the swap goes away.

If so, you should reach out to your accounting specialists who will also likely mention the changes to accounting for cap and floor premiums. Rule revisions now permit those to be amortized straight-line, as opposed to the back-loaded caplet and floorlet schedules previously mandated.

For those who have resisted derivatives because of the accounting headaches they may have caused, now is the time to re-evaluate if your balance sheet may benefit from the simplification of FASB’s new standards.

At a minimum, does your institution have a board-ratified derivatives policy in place which would permit timely execution if the opportunity presents itself? Even if it does, I’m guessing it may need some new language given the aforementioned changes.

If your institution plans on strategic action during 2018 to “remediate” interest rate risk sensitivities, it would be wise to understand how hedging may fit into that puzzle.

Plenty of work to be done

As the budgeting season approaches and balance sheet managers study FOMC’s “dot plot” and defer to their most reliable economic forecasts, they would be wise to allocate additional resources to the aforementioned considerations.

Understanding the influence of a flattening yield curve on your NII projections may alter the degree of asset growth necessary to reach budgeted goals.

• Is it possible we need even more balance sheet funding in 2018, given margin compression?

• How much are we willing to pay for it?

• How much “deposit flight” risk resides on the balance sheet?

• Or will we need to go to the wholesale markets?

• Does liability extension make sense for your balance sheet?

• Could a balance sheet hedge accomplish the same result, only at a significantly lower relative cost?

While some bankers may simply defer to the old reliable “3% growth across the board” mantra, others recognize the shortcomings of this approach. They will make it their business to know the answers before the test starts.

Instead of relying on a crystal ball forecast, build your institution its own code-deciphering machine by doing a little extra homework for 2018.