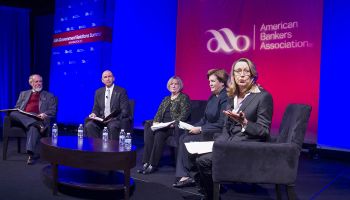 The old Cole Porter song may plead “Don’t fence me in,” but in some settlements that is precisely what the Consumer Financial Protection Bureau aims to do.

In the course of a discussion about the bureau’s enforcement of UDAAP and related legal provisions, Peggy Twohig, assistant director of the bureau’s Office of Supervision Policy, revealed something bankers may not have appreciated. She told attendees of the recent Government Relations Summit of the American Bankers Association that some of the bureau’s consent orders go beyond what the underlying laws require.

Twohig characterized this policy as “fencing in”—her words—that is, putting a regulatory ring around a company that the bureau believes has violated regulations or laws.

“If you go over the line,” said Twohig, who spent 17 years at the Federal Trade Commission prior to joining CFPB, “we are going to do a few things to be sure you not only remediate the harm, but to make sure it doesn’t happen again.”

Read it all. They expect you to

Twohig spoke more plainly than regulators typically do at such “regulatory rap sessions.” Whether private or public, as this ABA session was, no matter how agitated or insistent a banker’s question may be, regulators often return factual, diplomatic answers. Usually the panelists for such events are senior staff officials, but not the top leaders of their agencies, nor are they the folks who deal directly with bankers in the field.

But Twohig was pretty direct in her answers during the session.

Most of the meeting consisted of Q&A from bankers and moderator Wayne Abernathy, ABA’s executive vice-president for financial institutions policy and regulatory affairs. At one point Abernathy said bankers felt CFPB makes policy via its enforcement actions. ABA and its members see this as skipping the usual federal process of proposing rules, receiving industry comment and input, and then reproposing them having made adjustments.

Twohig confined her answer to the issue of deceptive practices. First, she answered, deception, being a qualitative matter, defied complete capture in a formal rule. She added that there are decades of law in the area of deception—FTC has pursued deception issues for decades—and therefore no shortage of precedent to look at.

Above all, she said, flexibility is seen as very important in enforcing deception cases.

“We can’t cover every eventuality [in a rule],” Twohig said. “And I submit to you that you [the banking industry] would not like that, either.”

This line of discussion had begun when Abernathy referred to a speech by CFPB Director Richard Cordray earlier in March before the Consumer Bankers Association. In that speech, Cordray not only acknowledged that compliance officers and other bankers were looking to enforcement actions for guidance, but that they should be.

“Indeed,” said Cordray, “it would be ‘compliance malpractice,’ for executives not to take careful bearings from the contents of these orders about how to comply with the law and treat consumers fairly.”

Cordray said it would be nearly impossible to frame a perfect regulation prior to attacking deception. He said that it made sense to apply CFPB’s limited resources—not a point many bankers would agree with—towards enforcement actions that catalog in detail what the bureau finds deceptive.

“These specific orders are also intended as guides to all participants in the marketplace to avoid similar violations and make an immediate effort o correct any such improper practices,” Cordray said in his CBA speech.

Responding to Abernathy’s challenge of this concept, in the context of actions CFPB has taken regarding “add-on” products, Twohig responded, “The heart of the matter is deception,” and repeated the sentence for emphasis.

Regulator panels at both the main ABA summit and the mutual banking conference that preceded it touched on many issues that the industry has concerns about.

Broadly, when the matter of “de-risking” came up—dropping customers a bank feels it will be criticized for serving, under Bank Secrecy Act/Anti-Money Laundering laws—Darrin Benhart, deputy comptroller for supervision risk management, emphasized the regulators’ long-running response: The agencies do not feel their role is to proscribe industries or types of customers.

“We don’t tell you who you can bank and who you can’t bank,” said Benhart. He said it is for each bank to decide which customers it feels it can bank and when a suspicious activity report (SAR) should be filed if a firm remains a customer.

“We focus on the bank’s governance process,” Benhart said.

However, he added that the regulators are gathering relevant data. “It may be appropriate to put out guidance, after we see what the best practices are that we can recommend.”

During the Q&A Linda Navarro, president and CEO, Oregon Bankers Association, spoke of the confusion among bankers in states where marijuana has been legalized or decriminalized. (As of March 22, 708 applications for types of commercial recreational marijuana activities license have been filed in Oregon.)

She said the bankers are unclear how to balance federal enforcement and the actions and statements of FinCEN, the Justice Department, and banking regulators. Especially troublesome are dealings with companies that aren’t in the marijuana trade, but which serve that business. Examples include construction companies and firms that supply agricultural supplies. Benhart said only that this is an area the regulators continue to explore, including ongoing discussions with FinCEN.

During the mutual conference, Toney Bland, senior deputy comptroller for midsize and community banks, spoke about commercial real estate lending in the context of regulators’ 2015 reminder of past CRE guidance.

“We see where some lessons [from the crisis] have been learned,” said Bland. “But we also see the impact of competition.”

Separately, Benhart said that the Comptroller’s Office is increasingly looking at oil and gas credit issues. Last year the agency’s semi-annual risk report and the press meeting reviewing that document identified energy banking as a concern that was being watched. Benhart’s comment seemed to indicate a growing concern about this credit risk.

FASB’s pending “Current Expected Credit Loss” framework was discussed both in the mutual regulatory panel and during a separate update session.

Regulators minimized the likely impact on community banks, although bankers remain quite concerned.

Doreen Eberley, director of the division of risk management supervision at FDIC, said the agency does not believe it will be necessary for community banks to make major changes to their processes for setting the allowance for loan and lease losses. She specifically said FDIC does not believe that community banks will have to purchase sophisticated models for setting ALLL.

She suggested that speculation in this and related areas wasn’t helping. “When you want to know what regulators expect,” she said, “ask a regulator.”

Eberley also said that banks would not be left to figure things out on their own. She said the Exam Council would issue guidance once FASB publishes its final standard.

During a session devoted to CECL, Mike Gullette, ABA vice-president, accounting and financial management, presented an update. He noted that ABA, regulators, accounting firms, and other groups had met with FASB about CECL in a roundtable discussion in February. ABA was dissatisfied with the results. [See “FASB’s controversial ‘CECL’”]

Gullette acknowledged that some attendee-bankers comments to the daily banking press indicated satisfaction with the roundtable. “Some came mad and left happy,” he said, “because they left not understanding what they’d been told.”

ABA called for a working session with FASB and other interested parties, which took place March 21. At that meeting, various scenarios had been worked through to see the impact on banks. The final form of the standard is yet to be seen. At this point it is anticipated it will be published in June.

More in this category: « No compliance without communication Weighing CFPB’s HMDA resubmission guidelines »
back to top