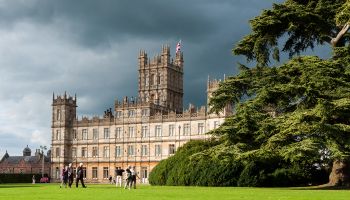 I admit it. I watch “Downton Abbey.” While that probably means I have to turn in my “man card,” I actually like the British dramatic period piece. Every Sunday night I curl up on the couch with my wife and daughter and tune to PBS.

Having watched all four seasons and now into the fifth, I was struck by how similar the themes they address in the show actually apply to financial institutions today.

“Downton Abbey” covers broad subjects such as change, the past vs. the future, and differences between the classes. While banks certainly don’t have royalty—unless you count CEOs as kings and queens—there are similarities between the show and financial institutions.

So is your bank like “Downton Abbey”? Consider these questions:

“Downton Abbey” covers a tumultuous time period in British history. Old Edwardian society is crumbling, while a new one is evolving. Some characters embrace that change, while others struggle with it.

How about your bank? How consumers conduct their financial transactions is changing. It’s no longer done at the branch (or even computer). It’s all mobile and digital. While we financial institutions talk a good game, how is your strategy actually adapting to address the new consumer?

If your bank doesn’t change its strategy, new entities like BankMobile and Simple.com will overtake you.

2. Are you recognizing the differences between executives and front-line staff?

Part of the “Downton Abbey” dynamics is sometimes referred to as “upstairs/downstairs.”

As in the royalty were upstairs and the servants were downstairs.

Think about your own organization. Is the hierarchy such that your front-line staff feel more like servants than team members? When was the last time anyone from the “C” suite genuinely recognized the contributions of a teller, loan officer, or service representative? If your bank doesn’t change the way it treats its own people, your brand will never succeed.

3. Are you struggling with change?

During the 1920s the entire class system was radically changing. Change was hard then —as evidenced by how hard Lord Grantham adapts. And change is hard now in the financial services industry—as evidenced by the lack of innovation coming from many banks. When was the last time you did something truly unique with a new marketing tactic? If your bank doesn’t effectively embrace new marketing techniques (digital, a sales-based web site, social media, etc.) you are doomed to be a commodity.

First Bank of Downton? No legs

While “Downton Abbey” is a wonderful show, it would make a terrible financial institution. Answer the above questions honestly and see if there are ways you need to adapt before your bank’s castle changes hands.

Mark Arnold is an acclaimed speaker, brand expert, and strategic planner who works with banks. He is president of On the Mark Strategies, a consulting firm specializing in branding and strategic planning. Previously Arnold served as senior vice-president for a multi-million dollar financial institution in Dallas.

More in this category: « Fincompetent? Banking’s customer identity crisis »
back to top