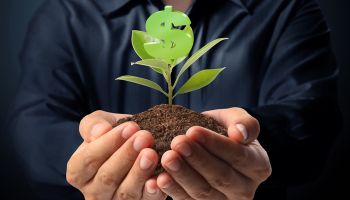 Much of the recent financial coverage has been focused on the major lending products: mortgage, auto, and bankcards.

Mortgages have been of great interest and concern in the aftermath of the housing boom and ensuing recession. Auto loans and leases have shown record growth after a slowdown in the recession led to pent-up demand for new cars. After a few years of tepid growth post-recession, bankcards are making news with growth and increasing consumer confidence.

Amid all these developments—the first two secured and the last unsecured, but a matter of an ongoing credit line—another market has emerged as a potential growth segment: unsecured personal loans.

What’s happening in a “quiet” corner

A typical personal loan is a simple instrument. Personal loan durations are short: 95% of these loans have terms of five years or less and loan amounts rarely exceed $10,000.

The conventional wisdom has been that these products are used by non-prime consumers (those consumers with scores 300-660) who may not have as much access to revolving credit to meet their needs—although whether this is actually true was an open question for TransUnion.

Because of its small size, perceived non-prime audience, and relatively smaller aggregate portfolio volume, this product has not received much attention historically.

However, the market for unsecured personal loans has experienced dramatic growth in recent years. At TransUnion we have observed lender reporting for our database that originations have risen at a compound annual rate of 8.4%, and balances by 12.9%, in the interval 2010-2014.

In that time period, several high-profile lenders entered this space with material impact. This growth may have increased the prominence of this product in the greater consumer lending architecture, and has motivated TransUnion to explore unsecured personal loans to understand their particular dynamics—both as an individual product and in the context of the consumer wallet.

Our exploration was based on a panel study of unsecured installment loans issued from 2010 to 2014, representing 54 million loans taken by 22 million consumers.

Two important points here. The study excluded student debt because, with the vast majority being essentially issued by the government on a non-risk underwriting basis, it is a different animal altogether and warrants separate attention. We also excluded payday loans. These are generally not reported to credit bureaus, often have sub-one-month lifecycles, and are a single repayment point product—in other words, not what one would generally consider a traditional personal loan.

TransUnion sought to better understand both the consumers and the lenders driving growth in this market. We asked:

1. Who are the consumers making use of personal loans?

2. What product substitution do we observe when a consumer uses a personal loan?

3. Who are the lenders who are driving growth in the personal loan market?

Appeal to all consumers

TransUnion has found that personal loans in fact have broad appeal to all types of consumers, contrary to the conventional wisdom. The number of consumers holding personal loans has increased by at least two million annually, even net of attrition, and come from across the risk spectrum.

While personal loans typically carry a reputation for being a subprime product, we observe increasing originations of these products by consumers in all credit tiers. While the majority of originations (66% as of December 2014) still go to non-prime consumers, the share of originations by prime consumers has increased 8% since 2010. We define prime as a consumer with a VantageScore® 3.0 credit score of 661-850 at origination, and non-prime as those consumers with scores 300-660.

TransUnion data has shown there are key risk differentiators between consumers who use a personal loan once and those who make repeated use of personal loans.

Meanwhile, the remaining 46% of consumers who used only one loan showed an even split, with half of consumers having prime scores and half non-prime.

And super-prime consumers, the lowest risk tier of consumers—with a VantageScore 3.0 score of 781-850 at origination—comprised 14% of the one-time population but only 5% of the repeat population.

Some thoughts on these findings:

• Product of recession? We conjecture that many prime consumers who may have temporarily lost access to other forms of credit during the recession and its aftermath may have turned to this product as a substitute.

• Repeaters spell higher credit risk. Those who repeatedly “go back to the well” for these products do so, it would appear, due to constrained finances. We suggest that lenders be aware of repeated use of these loans, which may indicate consumers are trapped in a debt cycle, and consider alternative approaches to helping those consumers.

Personal loans are issued for cash and can be used for many general purposes. Using our CreditVision time series data, we were able to observe activity that shows the value of personal loans for debt consolidation and refinancing. Both one month before and one month after consumers opened their first personal loan, we calculated the total bankcard balances held by each consumer. 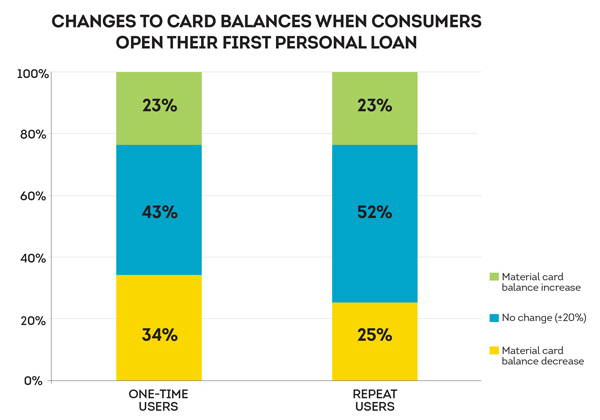 As discussed above, consumers who use only one personal loan are generally associated with having a risk distribution strategy. Chart 1, above, demonstrates that 34% of this population reduces their bankcard balances by 20% or more upon taking out the personal loan. This could indicate these consumers may take out a personal loan for a specific purpose. Repeat personal loan users, however, are almost equally as likely to increase their bankcard balances as they are to decrease them. In other words, these consumers appear to use these loans for a more general purpose. This population already appears to be at a higher risk, and the personal loan may only serve to increase their ongoing debt burden.

Lenders should also be mindful of prime consumers substituting personal loans for other loan products. While prime consumers have shown growth in this market, some of this may be driven be the diminished availability of home equity lines of credit (HELOCs).

HELOCs were a popular product throughout the mortgage boom, when consumers had ample home equity to borrow against. As property values declined, home equity evaporated, and HELOC originations entered a prolonged slump. At the same time, however, prime consumers began to show growth in the personal loan market, as shown in Chart 2, below. 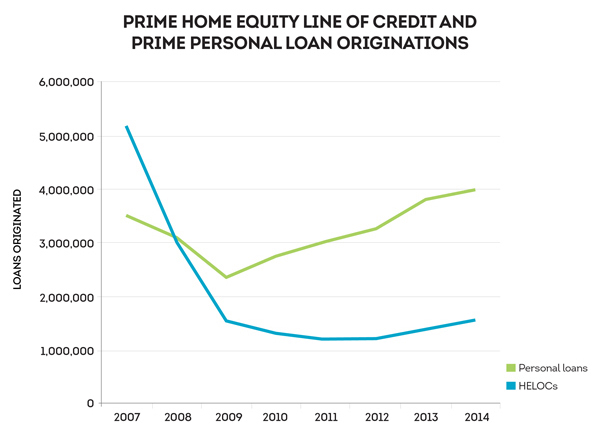 During the recession and recovery, prime consumers still demanded short-term financing and debt consolidation. When HELOCs were no longer generally available, many prime consumers chose personal loans as the next best financing instrument.

As home equity continues to recover and HELOCs become more readily available to homeowners, we expect to see some migration of prime consumers away from personal loans and back into HELOCs.

The Personal Loan market is generally thought of as being driven by consumer finance companies, with nimble, well-financed startups entering the space. However, our data indicate that many other categories of lenders compete in this market. In fact, as we see in Chart 3, below, since 2010 banks have issued the majority of loans by value, and credit unions have maintained a strong share. Finance companies, including the emerging fintech sector, have shown strong growth but are far from the sole category of personal loan issuers. 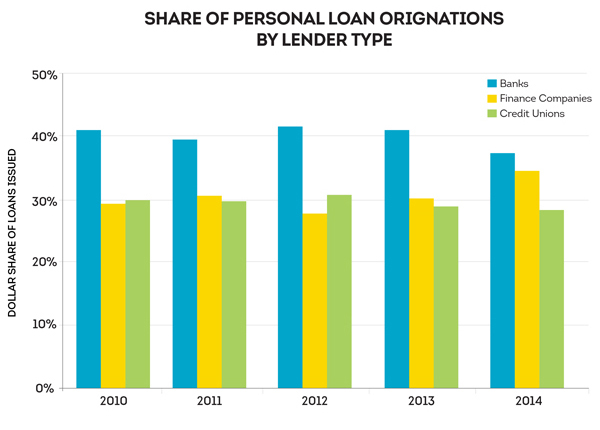 The difference between these lenders is clear when reviewing their loan values and the risk profiles of their customers.

The market for personal loans is a rare example of fast growth and rapid change in the lending marketplace. Demand for these loans is observed across all age groups and risk levels, and the demand is being met by a diverse range of lenders.

While the newest fintech entrants receive much attention, banks and credit unions are also doing much to serve this market.

Some strategies suggested by this data:

• Move up the food chain. Lenders currently in the personal loan market may consider moving upmarket to higher-value loans issued to lower-risk consumers.

• Think in complementary terms. Lenders considering an entry should be aware of the broad demand for these products and consider how they can best complement your current product portfolio.

Regardless of your product offerings, be aware that personal loans have established their position in consumers’ debt portfolios. They will be an ongoing source of liquidity for your customers and will be sources of competition, substitution, and opportunity for you.

Ryan James Boyle is a senior manager on the Financial Services Research and Consulting team at TransUnion. He can be reached at [email protected].

Ezra Becker is vice-president of Research and Consulting at TransUnion. He can be reached at [email protected].

More in this category: « Can compliance burden be a catalyst? Could great social media ratings make a better loan? »
back to top