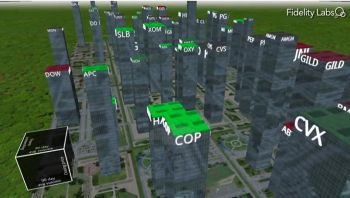 Banker Chris Nichols tried something like Fidelity Labs’ beta StockCity a while back, but decided not to go further. But just recently he and his staff tried some new experiments with augmented reality and virtual reality.

Virtual reality is all the rage. Facebook released its Oculus Rift headset and it was announced that the NCAA Final Four basketball games will be live-streamed in virtual reality.

This all has the “wow” factor we all look for today, but the reality of virtual reality is that it leaves much to be desired.

It is no surprise that, in our opinion, the technology is over-hyped and out over its skis. We demoed the headset and got nauseated.

But we soldiered on. We then tried to code a virtual reality branch to possibly give customers an “immersive experience,” until we figured out that there is really no need to look above you or behind you when talking to a banker.

However, just because the virtual reality experience is over-hyped doesn’t mean that it won’t catch on in time and that there will not be an application for both virtual and augmented reality in the banking industry.

So, we played with both concepts for a week and came to some interesting conclusions.

Forget helping your customers find ATMs or branches, because a simple 2D Google search can accomplish that faster.

Augmented reality excels when you have a mass of data that has a geographic value and bank customers that have a point of physical interaction. This test is important to keep in mind, as if you just have a drop of data, don’t have a point to leverage a spatial or geographic view, and don’t have a location to interact with that view, then you are better off not using augmented reality.

With its Home Finder app, Halifax Savings, out of London, part of Lloyds Banking Group, and Commonwealth Bank of Australia, with its CommBank Property App, have the right idea as they overlay property level information for offered residential properties. The result is an application where bank customers can walk down the street where they want to live and figure out what is for sale and the details behind the properties.

At CenterState, we figured that if you are going to spend the money, you might as well go after the most profitable customers you can. So we took the concept and played with a commercial loan application that helps business owners purchase their retail or industrial building by pointing their phone at a location. The idea would be that they could not only see what is available but see what a possible loan looks like complete with market rates, payments, and terms. 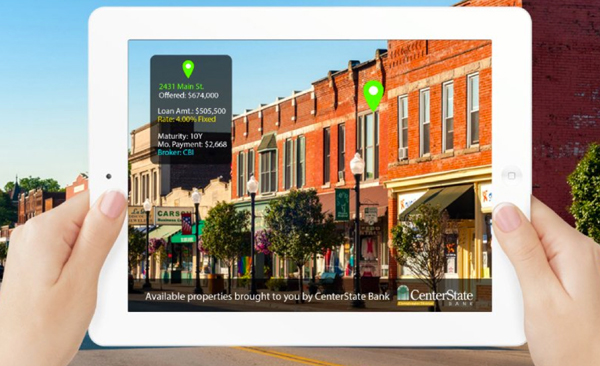 This application made some sense because it did allow the user to have a better feel for the spatial relationship of their target building to other locations such as transportation, open space, markets, and similar factors.

By setting your investment and property criteria (i.e. maximum payment, cap rate, square footage, age, proximity to freeway, etc.), your smartphone sends a push notification to you when you are physically close to an available property that meets your objectives. Users can then take out their phone and point to get a live feel for both the property and the data behind the property.

Of course, the same could be done for auto loans (by pointing at a car), student loans (pointing to a campus), equipment financing, home remodeling projects or anything else.

But at some point it felt like we were trying to solve problems that are not really there.

Unlike augmented reality, a virtual reality application is a virtual horse of a different virtual color.

The good news is that the setup does not have to be portable, at least right now, so your ability to transfer data and render far-off worlds is easier.

The question then comes up: Do you really need to bank in far-off worlds?

Let’s assume that technology will soon overcome the motion sickness factor, which is real.

The question is, what do bankers do with virtual reality?

The common thought would be to create a virtual branch to get rid of your existing branch. From an economic standpoint, it would cost us approximately $180,000 to program a workable virtual branch from scratch, which is much cheaper than the normal $1.1 million price tag.

But when you start to create the virtual branch world, you soon realize that no one cares about the elephant ear plant in the corner. And there is no reason why you should ever want to see the backside of your virtual banker.

Fighting the virtual Orc Varok Saufang in a 3D game we get. But we could not get our head around how an immersive branch experience means anything more than our current online experience.

Our customers at CenterState still want a physical branch. Or they could care less about a branch, and really just want to deposit their check and maybe talk to one of our friendly bankers—both of which they can do with our mobile app and FaceTime. (They are much friendlier, and trustworthy, than that orc.)

We don’t doubt that the virtual branch will catch on, we are just skeptical of doing it in 360 degree 3D with $600 funny glasses. A FaceTime or Skype modified for banking would solve this problem just fine.

Next to a simulated branch experience, we have played with several virtual reality games meant to simulate financial service-style problems.

We’ve created games for training in wealth management advisory and customer service, for instance, where bankers can have a more realistic experience in dealing with the respective challenges.

We found that these applications are interesting, but not realistic enough to create a two-times better experience than just watching videos that present a scenario. In both cases we felt we were still playing a game, and that the limitations of such created its own set of challenges that limited value.

Years ago we created a 3D version of bank investment portfolios modeled as a city where the height of a building represented the yield, width represented inverse price volatility, and depth represented exposure amount. Using this version, you could automatically get a feel for how stable your investment portfolio structure was and how susceptible it was to an “earthquake.” Investments that were highly volatile with high yield would topple at the slightest tremor.

The same can be done with a bank’s loan portfolio giving a unique view to help with portfolio construction.

Interestingly, Fidelity Investments’ Fidelity Labs has taken this concept and applied it to equity portfolios and has created an application for the Oculus Rift. In our view, there is something to be said for this view, which is in the beta stage, but the difference of a 3D rendering in 2D and an actual virtual experience is slight. 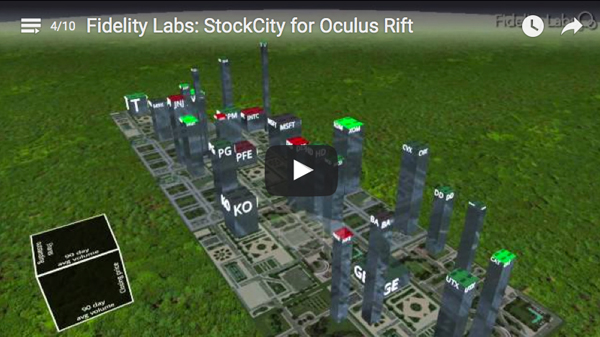 “Imagine being able to walk the streets of your stock portfolio,” begins a video from Fidelity Labs. Click above to view the video on the Fidelity Labs website.

So, speaking of reality …

Since the last Oculus Rift developer kit was released back in 2014, we have been struggling to figure out a deep value-added application for both augmented and virtual reality.

We are still struggling.

We have read and talked to many pundits. They have exciting idea, but we found out two things.

First, that they may have never put a code to a screen and are unclear as to the complexity of their thoughts.

Second, we have found that often they have not taken a step back to try to figure out a way to solve their problem with existing technology.

We will sum up our experience: For banking, both augmented reality and virtual reality seem to be technology that is looking for a purpose.

The applications we have seen are interesting, but not compelling—maybe next year.

Until then, we will be content with battling orcs and watching to see how far North Carolina can go in the Final Four (unless we get motion sickness).

Has your bank explored augmented reality or virtual reality? Chris Nichols, and our readers, would like to know what you have found. Take off your goggles and comment in 2D below.

More in this category: « Our cup runneth over, with bitter brew How millennials think about privacy »
back to top