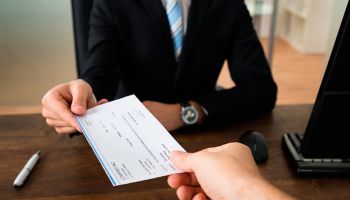 William Mougayar, author of The Business Blockchain and an active investor and advisor in cryptotechnology, looks at the implications of the growing blockchain evolution.

While in Amsterdam at the Steemfest, as we were finishing dinner, I’m not sure how the conversation with the waitress veered into the subject of checks, when she mentioned they haven’t been using checks in Holland for a long time.

I didn’t know that, and “checked” into it.

It turned out that checks were no longer used in the Netherlands since 2007. Actually, the same had happened in all Scandinavian countries, plus Austria, Germany, Poland, and Belgium, in favor of electronic transfers and direct bank transfers.

After more research, I found out that Europe had an (oldish) system called Giro for handling electronic transfers and bill payments, and apparently even that system is getting phased out. Actually, electronic payments across the European Union are now fast and inexpensive—usually free for consumers.

This prompted me to wonder why are we still using checks in North America (and in many parts of the rest of the world), in a day and age of increasing electronification of everything.

Recently, I had to deposit a U.S. check and the standard banking holding period in Canada was 15 days. I didn’t remember the last time I wrote a check, except that recently, I had to pay a washing machine repairman via a check, as that was the only method offered.

Payment systems and rituals are highly influenced and shaped by national regulators, central banks, and clearinghouses.

In the U.S., the Automated Clearing House (ACH), regulated by NACHA and the Federal Reserve System, handles all interbank transfers, including direct deposit and direct debit.

In Canada, check sizes and types are overseen by the Canadian Payments Association (CPA), now renamed as Payments Canada.

Every country in the world has its own payment regulation entity that dictates how banks, financial institutions, and businesses can handle payments.

Consumers are the consequential recipients of the practices being imposed, but don’t generally have a say in influencing the direction of payment methods. Instead, progressive consumers have turned to alternative methods of payments and money transfers, such as PayPal, Apple Pay, Venmo, TransferWise, Xoom, Western Union, Square Cash, or others.

Millennials especially are a big segment of users that love these systems. Most millennials did not touch checks, just as many of them skipped telephone landlines in favor of cell phones, and many are now opting for mobile banking above anything.

For example, The Federal Reserve System’s Faster Payments Task Force has a mission is to identify and assess alternative approaches for implementing safe, ubiquitous, faster payments capabilities in the U.S.

Both organizations have announced interest in, or initial work with blockchains.

But it seems that all these so-called innovative gestures are focused on backend, mid-office processes or around business-to-business transactions. This means that consumers (who care more about front-end experiences) may not necessarily see a big change that soon.

Time to change the flow chart?

Why do we still think along the archaic terms of “clearing and settlement”? Why can’t these two steps always be collapsed into one?

Of course, some countries have much faster internal settlement cycles than others, but it seems that moving the world to real-time settlements is still a slow process, with only 18 countries already having real-time payments systems in place and 12 others building or exploring them, as of 2005.

With SWIFT in the middle, and existing standards like the Real-Time Gross Settlement (RTGS), it is apparent that the world runs on an intricately complicated and proprietary hybrid set of systems that can barely catch-up with each others, making the whole as bad as its weakest link.

We need to ask—if the world’s payment system were to be re-invented today, what would it look like?

In my opinion, you would find a good dose of blockchain technology, cryptocurrency wallets elements, low transaction costs, low fees, in addition to an emphasis on mobile experiences, instant settlements, and a lot more peer-to-peer transactions that are easy to initiate (e.g. paying a tradesman instantly).

In this new world, the banks and regulators wouldn’t be gatekeepers, but rather a node on the fast infrastructure network. In this scenario, banks (or institutions that are account holders) would be bypassed if they are slow, and regulators would be the recipients of automatic reporting, in essence giving them the visibility they want in order to enforce compliance.

I can’t wait to see a fully electronic world of money and value transfers with instant clearing and settlements, and user experiences that users really want.

Settling via blockchain technology is already showing us that it is a lot more efficient than settling via a patchwork of high latency proprietary database integrations.

More in this category: « Innovation’s proper home in your bank Blockchain’s still waiting for its web »
back to top