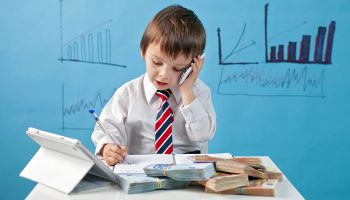 A new generation will take financial services into the future. In the "Next Voices" blog a rotating group of bloggers of the younger generation will share what they are learning and doing. Proposals from guest bloggers are also invited.Please email [email protected]

The Olympics have always been a fun event for my family. For my five-year-old son—whose sole exposure to television before the 2018 games was Netflix—the seemingly incessant advertising surrounding the global event was a novel experience.

Instead of engendering a semi-mindless approach to TV commercials, my wife and I decided to test his critical thinking skills. As each commercial started, we raced to determine what the commercial was trying to convince us to buy. Once he identified the product being advertised, we discussed whether or not we actually needed it. The answer was “no” every time.

As children develop, they generally decide they need everything. As a parent, you can’t walk through any grocery aisle or electronics store without your kid saying he needs at least one version of everything on the shelf.

It’s only natural, but it’s crucial that we help them identify when they need something as opposed to just wanting it. Doing so reinforces their future ability to prioritize desires and necessities using abstract concepts like debt, financial literacy, and even retirement planning.

In a country where 35% of adults with a credit file have debt in collections, prioritization becomes even more of a necessity. I remember a conversation I had with a friend some time ago about his path toward earning a college degree.

Exiting high school, he wanted to play football, so he enrolled at a small private college to pursue that dream. He wasn’t on scholarship, so he approached an adviser about the best way to pay for tuition, a conversation that eventually led to his first loan.

After his freshman year, a friend convinced him to move across the country to join him at a different college. So, naturally, he got slapped with out-of-state tuition costs; but no worries, because he could take out a loan regardless of the tuition price, right? What a terrifying thought.

Conversely, I was told when I went to college, “You’re going to have plenty of fun, but you’ll also probably waste 20 hours a week, so you might as well use those 20 hours per week to get a job that helps you pay for college.”

I was fortunate to graduate from college debt-free in part because of that advice. And before you ask, I didn’t graduate 20 years ago, so the “college was cheaper then” argument doesn’t fly.

Meanwhile, close to eight years later, my friend is still paying the price for his lack of understanding of debt, a responsibility that lands squarely on parents’ shoulders.

Kids, after all, learn by example. If a parent can’t live without that new BMW and is willing to amass debt to acquire it, what does that teach a child?

My own father would frequently tell me, “Don’t waste your money on cars.”

Today, I drive a 10-year-old Hyundai Elantra with pride. I paid for it with cash six years ago and am completely satisfied with my purchase.

It’s important that parents speak to their children about the long-term consequences that decisions made early in life can have on long-term financial health.

College, in particular, can entail particularly damaging choices for some. Millennials in particular were told they had to go to college and many did so without a good understanding of how debt would impact their future lives. That lack of understanding is now crippling many of them with tens or even hundreds of thousands of dollars of debt. Paying off those student loans now makes many millennials unable to make other investments in products that stimulate the economy.

In fact, a recent study from the Levy Economic Institute indicates that 44 million Americans collectively owe $1.4 trillion in outstanding student loan debt, which in turn holds back “everything from small business formation to new home buying, and even marriage and reproduction.” It also costs the economy between $86 billion and $108 billion a year.

While discouraging a path to college is certainly not the solution here, our broken system of debt accumulation absolutely needs to change. Part of the solution is educating upcoming generations on the importance their actions as young adults will have on their future selves, and advocating for responsible financial decision-making on everything from college choice to car and home purchases.

Investing early: Yes, you can do it!

It is one of life’s greatest financial ironies that the years in which you have the most leverage in preparing for retirement are also the years in which it’s most difficult to put money away. Investing in retirement at age 21 can make a difference of hundreds of thousands of dollars compared to the same investment under similar conditions at a later age.

Primary and secondary education in the U.S. does a mediocre job at best of teaching children the value of saving money, preparing for retirement, taking on responsible debt, and other aspects of personal finance and asset management.

Those responsibilities must fall on the parent. Teaching those lessons early and often brings many benefits, but there are a couple that stand out more than others:

1. Your child will begin to see how much you care about their financial responsibility.

2. You give your child an incredible advantage heading into his or her respective career.

Everyone approaches finances differently, as almost every marriage inevitably shows, and finding a common platform on which to raise a kid can be challenging in that respect.

However, there are certainly some key lessons on which we can all agree. Investing now—even if investing small—is imperative. Understanding debt holistically can save a young adult from a harrowing financial future. And, perhaps most importantly, encouraging your children to be financially literate early can lay the foundation for a better economic future for everyone.

Jordan Wright, director of business development at Q2 Open, is a proven fintech entrepreneur, innovator, and leader. The Q2 Open team uses API technology to drive new strategies for innovation and growth. Wright thrives on data, research, and meeting new people, and when he's not in the office, he loves spending time on fun projects with his kids.

More in this category: « Test planting the Acorns app Experiencing fintech at SXSW »
back to top