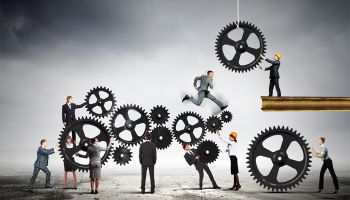 As a traditionally by-the-numbers profession, banking often discounts people-centric management as "soft" and nonessential. Under pressure to do more with less, many banks pay greater homage to financial skills than people skills.

In our experience, banks that have worked to elicit employees’ discretionary effort are yielding better results, particularly in deepening share of wallet. Doing so taps into employees’ “above-and-beyond” efforts through positive reinforcement.

In one example, a bank that identified and reinforced behaviors linked to cross-selling tripled the number of new accounts with three or more bank products or services opened in six months. Because those initial results were generated through effective behaviors, those impressive results were sustained throughout the next year.

Banking managers and executives would do well to adopt three behaviors that characterize exceptional leaders across industries:

1. Keenly observe the impact of your actions, and make adjustments based on how people respond.

The best leaders constantly and objectively observe how others react to their words, actions, and decisions. They do this even after they have attained roles and responsibilities that empower them to set strategy and organizational direction.

Why is this important?

Most leaders are trying to do the right thing, but their actions often have unintended effects. The ability to constantly and objectively observe how others react allows you to learn what’s working and what isn’t, and to fine-tune for optimal benefit.

For example, you may decide to create intranet forums to solicit employee questions and comments. While you can’t control what people will ask or say, you can respond and adapt more effectively when you have a finger on the pulse of the conversations in your branches or back offices.

To maximize your team’s discretionary effort, ensure that the impact of what you say and do aligns with your intent.

2. Do more asking than telling.

Despite having earned the right to tell, by virtue of their experience, wisdom, and authority, the best leaders use questions to engage, involve, educate and inspire.

Although telling people what to do may take less time and work in the short term, it does not bring buy-in and learning. Nor does it result in sustained behavior change.

Instead, use questions to help employees see the benefit of doing something a certain way. With this approach, your employees will continue to exhibit the critical behaviors—not due to being told to do so but because they see it as a better route to success.

Good questions can mean the difference between employees feeling micromanaged and distrusted, or feeling valued, trusted and supported.

None of us tends to react well to being asked repeatedly, “Did you do it (the assigned task)?”

On the other hand, provide natural reinforcement by asking such questions as: “What happened when you did (whatever approach we discussed)?” Or, “How did the customer respond when you said X (or did X)?”

“What did you notice?” also gets people thinking about and observing their effect on others.

All banks are in business to produce results. However, the fastest way to get there is not to watch the numbers like a hawk and then react—negatively if they’re poor or positively if they’re stellar. Instead, focus constantly on strengthening the critical behaviors needed to build organizational capability and bring about required results.

The most effective method is shaping, which is reinforcing successive approximations, or incremental behavior change. Recognize effort, progress, and improvement—and find ways to increase positive reinforcement for what your bank values. This requires measurement (leading indicators and evidence of behavior change), observation, feedback, and reinforcement.

For example, M&T Bank has used surveys that provide pinpointed upward feedback solely as a coaching tool—without direct linkage to consequences. The bank has found the surveys highly effective in helping managers strengthen their employee relationships, producing greater employee commitment. [Watch a short video of Rich Gold, executive vice-president of M&T Bank, discussing how his organization moved away from a focus on the performance appraisal process to one of building a system for managing people performance.]

Upward-feedback survey data gathered over the last decade have shown a high correlation between the three behaviors and top-quartile employee engagement scores, as measured by more than one third-party evaluator of engagement.

Increased discretionary effort and engagement, in turn, result in better performance. Focus on human behavior and you’ll make or exceed your numbers—and have a more fulfilled workforce.

David Uhl is senior vice-president of consulting services for workplace consultancy Aubrey Daniels International. With more than 20 years of experience, he helps clients in financial services and other industries maximize the discretionary effort of their employees.

More in this category: « Stop trying so hard at your job Is the bigger loan the safer loan? »
back to top