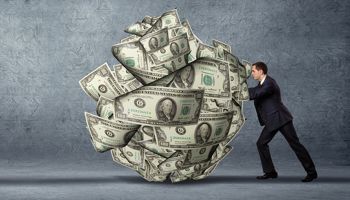 While most banks are on strong footing to comply with the Basel III capital accords, a fairly sizable number of smaller institutions are still falling short just six months before the deadline to begin phasing in the rules. 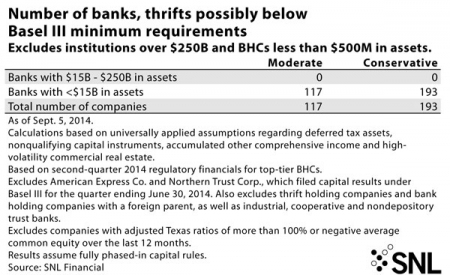 While banks have several years to reach full Basel III compliance, some advisers have cautioned that banks likely will need to show that they are moving toward full compliance even before the final effective date.

The "moderate" and "conservative" scenarios include trust preferred and cumulative perpetual preferred securities in capital for banks permitted to "grandfather" them in their capital ratios. Both scenarios also assume all banks opt out of including accumulated other comprehensive income in capital. Assumptions under the aforementioned scenarios remained the same between the original and final rules where applicable.

Eight bank holding companies filed their Basel III capital levels under the advanced approach framework for the first time in the second quarter and all the institutions met the minimum thresholds to be "well-capitalized."

Banks slightly below that asset threshold also find themselves standing on firm ground to comply with the Basel III rules. Assuming full implementation of Basel III, SNL found that the 20 largest banks with less than $250 billion in assets would report a median common equity Tier 1 ratio in a possible range of 9.95% to 10.30% and a Tier 1 ratio in a possible range of 10.55% to 11.25%. Both ranges are well above the required minimums and are nearly in line with the levels SNL found at the end of the first quarter.

Most small banks have sufficient capital to comply with the Basel III standards, as well, but a fairly large block of institutions still fall short of the requirements.

Smaller institutions narrowed the shortfall to the final Basel III rules by the end of 2013, though progress slowed considerably in the second half of the year. Smaller banks made modest progress again in the first half of 2014.

Smaller banks have long lagged larger institutions, accounting for a greater portion of the industry's shortfall under the proposed rules despite their smaller size. In the second and third quarters of 2013, those institutions were responsible for the entire shortfall measured by SNL and accounted for the vast majority of the shortfall in the fourth quarter of 2013 and the first quarter of this year. Smaller banks accounted for entire shortfall again in the second quarter.

Assuming the full phase-in of the final Basel III rules, SNL found that institutions with less than $15 billion in assets would post a capital shortfall below the minimum requirement based on second-quarter data of $985.7 million, or 0.85% of their risk-weighted assets under the "conservative" scenario, compared to $1.23 billion, or 1.31% at the end of the first quarter, and $1.35 billion, or 1.12%, at the end of the fourth quarter of 2013.

The second quarter marked the first time that banks' capital shortfall to the Basel III minimums fell below the $1 billion level since SNL first began measuring the impact of the capital accords in 2012.

The size of possible capital shortfalls has steadily shrunk over the last year, though SNL has found that the number of institutions falling short of the Basel III requirements fluctuated and even increased in several periods. For instance, SNL found that 210 U.S.-based banks with less than $15 billion in assets would fall short of the minimum requirements under the "conservative" scenario at the end of the fourth quarter of 2013, compared to 200 at the end of the third quarter of 2013.

SNL found that 117 would fall short under the "moderate" scenario, compared to 119 banks in the first quarter and 139 banks in the fourth quarter of 2013.

Still, SNL's analysis found that banks falling short of the minimums should be able to build their capital to the required levels in a relatively short time and even more quickly than in the first quarter. 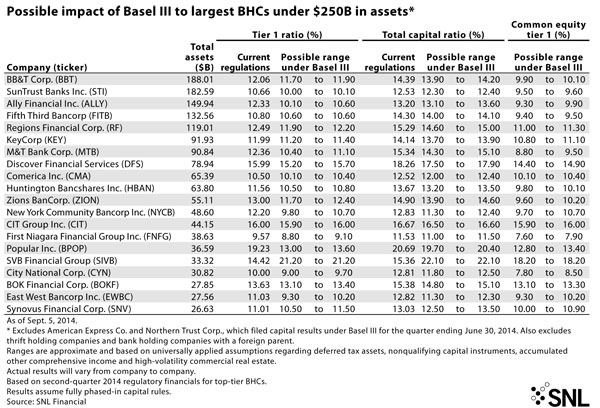