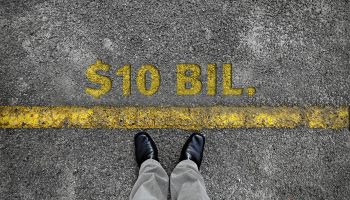 Four years of Dodd-Frank Act implementation have made banks within striking distance of $10 billion in assets very choosy about when and how they will cross that threshold.

Dodd-Frank introduced the Durbin amendment, new stress tests, and a new regulator for banks with more than $10 billion in assets.

Banks approaching that threshold have spent years preparing in order to avoid any surprises after they cross it, but they are in no hurry to get there, according to conversations with several bankers. That has caused them to focus on growth that maximizes balance sheets while ensuring they are ready for opportune acquisitions that would vault them over the line.

Ability to stay on right side of line

One company nearing the $10 billion mark is Itasca, Ill.-based First Midwest Bancorp Inc. President and CEO Michael Scudder told SNL that the bank, which had $9.10 billion in assets as of Sept. 30, 2014, has a great deal of flexibility in determining when it will cross $10 billion.

The bank is now closer to $9.5 billion in assets, given that the acquisition of Matteson, Ill.-based Great Lakes Financial Resources Inc. closed in December 2014. Still, Scudder said First Midwest has enough liquidity to shift its balance sheet from lower-yielding securities into higher-yielding loans. The bank had a loan-to-deposit ratio of 85.60% at the end of the third quarter in 2014, and Scudder believes it can increase to between 90% and 95% at its current rate.

"Absent what I would call a larger strategic acquisition, I don't see us crossing the $10 billion threshold in 2015," he said. 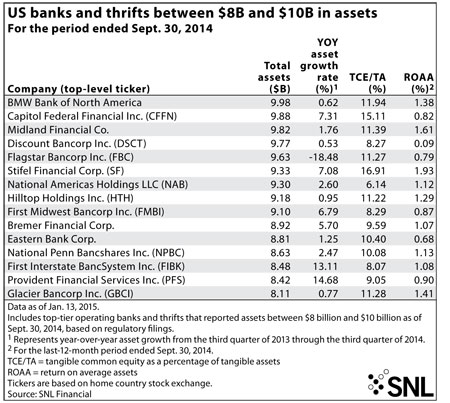 The timing of an acquisition that would push a bank above $10 billion in assets is a delicate matter. Opportunities are unpredictable, and Scudder said banks must be in a position to take advantage of them when they do arise.

Banks with more than $10 billion in assets by the year-end assessment deadline are hit with the cap on interchange income in July of the following year. Based on when a deal closes, it could send a bank above $10 billion many quarters before management anticipates, or allow it to rapidly gain scale while delaying the Durbin impact. The Durbin amendment will cost First Midwest between $7 million and $9 million pretax annually, assuming the bank takes no action to mitigate it. But Scudder thinks the bank can still hit $15 billion in assets in the next several years given its current growth rate.

"Obviously, to the extent we can time [an acquisition] so it doesn't cross over a calendar year in terms of flexibility … we would certainly do that," Scudder said. "But we would not forgo an opportunity just to make that timing happen—that would be the tail wagging the dog, in my view."

Getting ready for “graduation”

Billings, Mont.-based First Interstate BancSystem Inc. is another community bank focused on becoming "$10 billion-ready," according to CFO Kevin Riley. Despite having $8.48 billion in assets as of the end of the third quarter of 2014, management believes it must operate as if the bank could cross the $10 billion threshold at any time.

First Interstate is putting into place systems and staff that will prepare it to cross the threshold, since the pace of future growth could vary. By preparing now, the bank can more easily address regulators' concerns that could delay an acquisition that would send it over $10 billion. However, he said there is no set timeline for when the bank will grow to more than $10 billion in assets. 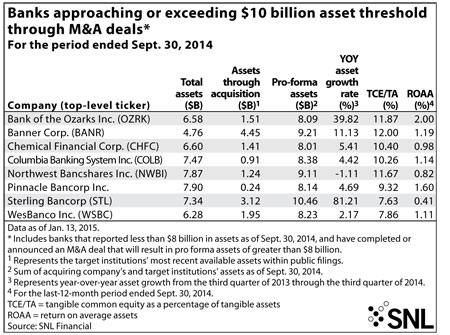 "Is it in the next four quarters? The next eight quarters? We don't know when that day will come but it will come and … we need to prepare ourselves today," Riley said.

First Interstate expects to lose about $5 million after-tax annually to the reduction in interchange income. Despite that reduction, Riley said he is skeptical of the pressure bank executives face to jump over $10 billion through sizable deals in order to quickly gain scale and mitigate the impact of the Durbin amendment. He said that "swinging for the fences for a grand slam and doing a huge acquisition" carries its own risks, especially if the acquiring bank is not prepared for the scrutiny and regulatory rigor that comes with having more than $10 billion in assets.

Riley said that regulators have been instructive as the bank readies itself to cross the threshold—raising awareness, outlining expectations, and checking preparations. First Interstate has also been proactive: Riley noted that the bank is hiring a senior compliance officer trained at a larger institution and recently purchased a "turn-key" stress-testing module from a vendor. The bank has also assembled a task force composed of several board members and executives who meet regularly about its progress.

Oh, the joys of graduation!

Evansville, Ind.-based Old National Bancorp will be subject to the Durbin amendment come July 1, given that it had $11.18 billion in assets at the end of the third quarter of 2014. Management has estimated in the past that the impact of Durbin will be between $2 million and $3 million a quarter.

The bank's first submission of the Dodd-Frank Act stress test will be due March 2016. But Old National has been conducting internal stress tests since it repaid TARP, said Lynell Walton, senior vice-president and director of investor relations. The early implementation meant most of the costs were spread over a number of years and gave personnel time to assess and reevaluate the system.

"Our CFO and [chief risk officer] are just in love with that process," Walton said of the company-run stress tests. "They're all over it because they know how good a tool it is."

The Federal Reserve Bank of St. Louis "does not set an expectation" for stress testing at community banks below $10 billion in assets, even if some choose to do it, said Julie Stackhouse, senior vice-president and managing officer of banking supervision, credit, community development, and learning innovation at the St. Louis Fed. Instead, she said, regulators focus on risk management. Stackhouse noted that interest rate risk management can take on an aspect of stress testing because of the threat interest rate risk poses to a bank's earnings, which could eventually put capital at risk.

The St. Louis Fed has oversight of several holding companies that have more than $8 billion in assets. Stackhouse said examiners are working closely with those firms to discuss expansion plans as a normal part of the examination process, and especially with looming stress tests.

Institutions with their sights on the $10 billion threshold are actively planning for how to approach, cross and operate over that "demarcation" line, she told SNL, with many looking for acquisitions that are accretive enough to offset the decrease in debit interchange income. She said many bankers use these conversations and expectations as "management tools" that guide them as they grow bigger.

Bremer Financial Corp. CFO Mitch Bleske agreed that stress testing can be a useful tool for banks, even when it is not done at the behest of regulators. St. Paul, Minn.-based Bremer had about $8.92 billion in assets as of the end of the third quarter of 2014 and anticipates crossing $10 billion in assets in the second or third quarter of 2015 through organic growth and its Eastwood Bank acquisition.

Bremer's board created a road map in early 2014 to identify areas where the bank would need to invest resources to prepare for the $10 billion mark. The Eastwood Bank acquisition, announced in July 2014, accelerated the company's growth plans. Bremer expects the Durbin impact to be around $4 million a year pretax, which Bleske called "manageable." 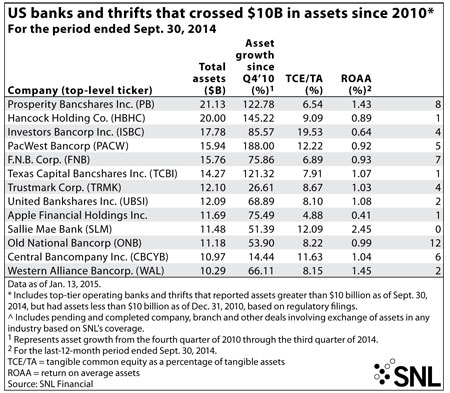 Banks that cross $10 billion in assets are also subject to a new regulator, the Consumer Financial Protection Bureau. CFPB is a unique banking regulator in that it generally does not have the safety and soundness concerns that other prudential regulators must balance, said John Geiringer, an attorney at Barack Ferrazzano Kirschbaum & Nagelberg LLP.

"As you migrate from one kind of regulator to another, there may be expectations from a compliance perspective that may be problematic from a safety and soundness perspective," he said.

The introduction of CFPB coincided with the inclusion of "abusive" into concerns about unfair and deceptive acts and practices, and created a shift in how examiners investigated and regulated such behavior.

In the past, regulators used rules and interpretive guidance to moderate behavior; Geiringer said CFPB has more aggressively used public enforcement actions to draw "a bright line," even if the institution facing the action may not have been aware its conduct crossed the line. CFPB did not respond to SNL's requests for comment on this topic.

Banks below $10 billion in assets are taking note. Geiringer said that growing institutions need to "up their game" to prepare for the new regulator and examine their entire organization through "a new prism."

"They need to be mindful of not just the objective requirements of the law but also the subjective elements of avoiding unfair, deceptive or abusive acts or practices, which are not so clear," he said. "And so they should ensure they have the right policies, procedures and people to address that new scrutiny."

Making the regulatory step up

Investors Bancorp Inc. is one company that crossed the $10 billion mark in the wake of Dodd-Frank. Assets reached $10.21 billion in the second quarter of 2011, and the company, which completed a second-stage conversion in 2014, has seen growth accelerate in recent years. Assets totaled $17.83 billion at Sept. 30, 2014, according to SNL data.

Investors President and CEO Kevin Cummings told SNL that executives conduct monthly conference calls with examiners and the company is preparing to host a resident FDIC regulator. As a former auditor, Cummings said he can appreciate how exams have changed for larger banks, from a "hard close" point-in-time exam following the end of the quarter to an around-the-clock exam that focuses on specific aspects of the organization, like credit, asset-liability management, strategic planning and Bank Secrecy Act and anti-money laundering compliance.

Regulators make the shift on an institution-by-institution basis, and some smaller banks that are more complex could experience a change before a larger but more straightforward institution. Stackhouse said St. Louis Fed examiners take steps to ensure that institutions of similar size and complexity receive similar supervisory approaches. The regulator currently does not use resident examiners in its footprint because many of the larger institutions it oversees are located near a Fed field office.

The regulator is also mindful of how it can work with supervised banks to make exams less burdensome.

For instance, Stackhouse said that small banks have been quick to adopt image-sharing technology that allows regulators to view loan documents offsite; this can free up the banks' limited compliance personnel.

"We are very sensitive to regulatory burdens and there are some things we can't change, like laws," Stackhouse said. "But if we can fine-tune the processes and make it take less time from a community bank, we're willing to do that."