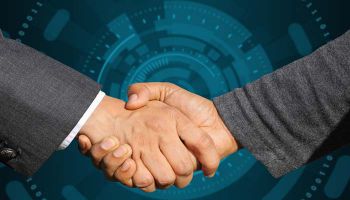 To paraphrase a recent quote making the rounds in recent weeks: There are more panels on bank/fintech partnerships than there are actual partnerships.

While that may be true, there are, in fact, some live partnerships in place, and three of them were highlighted at the Efma Bank+Fintech conference that was held in New York last month.

The one we’ll focus on here is between Mercantile Bank of Michigan, a $3.2 billion community bank based in Grand Rapids, Mich., and Abe.ai, an Orlando-based startup producing artificial intelligence-powered conversational banking software.

Mercantile has had a personal financial management application for some time, a traditional product with “lots of charts and graphs,” as described by John Schulte, the bank’s chief information officer.

“We hit a wall in terms of engagement,” he said of PFM usage.

Further, the bank wanted the application to be about more than just balances and recent transactions. It wanted its PFM to provide financial health insights—to give customers insights into their spending and what they have left to spend, for example. And it wanted the app to be voice- and chat-based, in the age of Alexa.

As Abe.ai co-founder and COO Keith Armstrong put it, they also wanted to move forward to put the bank in what he called “listening mode”—able to engage with its customers “at scale in ways that are genuine.” Such listening elicits, for example, that the customer just got married, or is going through a divorce, or is contemplating buying a home.

Working with Abe.ai, the bank developed and launched MercMoney, a chatbot that can operate on Alexa, Facebook Messenger, Google Home, and SMS text. In a video demo shown at the conference, the customer said, “Alexa, ‘Open MercMoney. What’s my entertainment budget?’” Alexa responds, “You have $500 in your budget and you have $125 left to spend.” Customers can also inquire how much they’ve spent in the last few days and receive answers based on transaction data.

“The way we looked at this was as a way to start and end many arguments about finances on the home front,” said Schulte. MercMoney “brings that financial health dialogue to another audience that we haven’t traditionally been able to reach with the PFM.”

Bank gets a cut of the action

The two executives described how the unusual partnership—more like a joint venture—took shape and what they learned along the way.

In their initial conversation, said Schulte, the two teams did not talk about technology at all. Instead they talked about “our passion for improving the financial health of customers, not about how a chatbot can make that happen.” That alignment set the stage for subsequent discussions.

A $3.2 billion bank can’t afford to develop such a product on its own, and a young fintech company can’t devote its resources on a “one-off build and integration with a community bank in Michigan,” as Armstrong put it. Abe.ai needed something saleable. So did Mercantile.

Armstrong said this plan required “a lot of contract innovation to create a true partnership. We worked hard up front to be sure our success was aligned with his success.”

“‘Contract innovation’ is a fancy way of saying, ‘I beat him up’,” quipped Schulte. The bank was taking a chance, investing dollars in building out this product for the first time, he continued, but it helped to know we had “other banks and credit unions that could swoop in right behind us. So I said to Abe.ai, ‘Let’s build in some sort of payback mechanism for Mercantile’.”

The payback: For every one of those banks and credit unions that follows suit, the Mercantile gets a piece of the revenue.

For his part, Schulte agreed to be “a passionate advocate and reference” for the software. He feels it’s a creative way for a bank and fintech to build a strategy for success.

“John got a hell of a discount for taking on this advocacy role,” said Armstrong, “but as an early stage company, that is what I want—a happy, rabid customer willing to go out and talk about what we’re doing among other folks in the industry.”

In addition to that advocacy, Schulte noted that as a $3 billion-plus organization, the bank does have certain strengths that a larger bank doesn’t, which could be useful to a new fintech. Two he mentioned were nimble approach and fast-to-market mentality to get feedback to the fintech provider.

Tear down those walls

Banks tend to put up walls based on due “protecting us from fintechs,” said Schulte. To use a dating analogy, he continued, “if we’re negotiating the pre-nup on the first date, we’re not starting from a healthy place.”

Due diligence certainly is important, he said, but he didn’t want to hand down a giant due-diligence checklist at the first stage of the discussion. Instead, the process was based on a shared philosophy, he said, which is what should bring banks and fintechs together.

Armstrong went on to discuss the importance of other parts of the relationship including deployment and support. “A lot of early stage companies forget that it’s not just about great technology,” he said. It’s also about the lifecycle of that relationship.

Some of that support Abe.ai provided the bank included how to launch it to customers, how to position the security of the platform, as well as listening to customer insights to help shape how Abe.ai the two parties will build out the platform.

“The real power of this technology is not to just automate a conversation at the call center level, it’s a long-term strategic listening mode,” said Armstrong.

Lastly, said Armstrong, roadblocks happen. Agreeing, Schulte added, “You’re going to fight along the way.” It’s important to expect that, the banker said, and to shift the focus from blame to solving the problem.