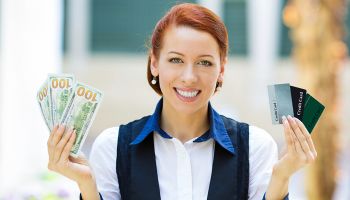 Nine in ten credit card holders are satisfied with their cards, including nearly half (46%) who say that they are very satisfied, according to a new study conducted by Ipsos Public Affairs on behalf of the American Bankers Association. The study found that 78% of U.S. adults have at least one credit card.

This satisfaction may be linked to the rewards that card holders are earning, as more than eight in ten current credit card owners (83%) say that their card is currently associated with a rewards program. The Ipsos study also looked at loyalty programs offered by nonfinancial companies.

In terms of utilization, cash back is the most common type of reward chosen, used by 51% of cardholders, followed by general reward points (35%).

Travel and transportation rewards programs fall into a second tier—airline miles (20%), gas rewards points (12%), and hotel points (11%), while only 2% say they have a card that offers some other rewards program. (Some programs offer choices of redemption methods.)

At the same time, many are missing out on these benefits, as nearly one in five (17%) say that their credit cards do not have any rewards associated with them.

When asked which type of credit card reward program is most appealing, cash-back cards top the list (55%), selected by a majority of credit card holders. (This jibes with a study among affluent customers by CreditCards.com, covered earlier this year in “American affluent want cash back.”)

General points cards that allow points collected to be redeemed for things like gift cards and electronics rank second (23%), followed by airline miles (13%), hotel points cards (5%), and other types of reward programs (1%). Only 2% of credit card holders say that nothing appeals to them among credit card program offerings.

Rewards programs rank high in marketing appeal. A valuable rewards program (29%) is among the top factors when deciding which credit card to apply for, ranking just behind a low APR (35%). One in four respondents say their primary motivation for choosing a credit card involves the card not having any specific fees associated with it, while only one in 20 say the same of having a high credit limit (5%) or the card being sponsored by a retailer at which they frequently shop (4%).

Are rewards programs clear enough to consumers? More than nine in ten respondents (93%) with a rewards card say they found it very (57%) or somewhat (36%) easy to understand their cards’ programs. Furthermore, among rewards card holders, nearly nine in ten (89%) have redeemed rewards at some point, including a quarter who have done so within the past month (26%), and more than a third who say it was within the past six months (35%). At the other extreme, one in ten have never redeemed their credit card rewards (11%).

While credit card rewards programs are widely used, so are loyalty programs offered by different types of businesses.

More than three quarters (78%) of Americans surveyed by Ipsos say they participate in some sort of rewards program, including more than half who participate in programs offered at drugstores (e.g. Walgreens, CVS, etc.) (54%).

Slightly more than one in five, however, do not participate in any loyalty programs (22%).

These are findings from an Ipsos poll conducted March 11-13, 2015. For the survey, a sample of 1,006 U.S. adults age 18 and over was interviewed online, including 774 respondents who say that they have at least one credit card.