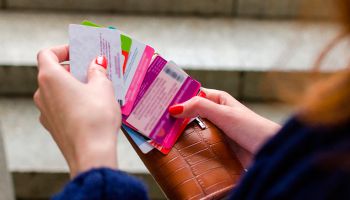 ‘Tis the season to snap up special retail promotional pricing and to charge through the holidays. TransUnion projects that retail private label credit card accounts will grow substantially in the final quarter of 2016.

The credit reporting and analysis company indicated that the number of consumers with retail credit cards has already risen to 125.3 million in the third quarter, rising beyond December 2015’s 124.8 million and December 2014’s 123.7 million. The fourth quarter will see yet more growth in these card accounts.

TransUnion noted that retail card “lift” will be strong. In the 2015 holiday season, the number of new card account openings rose as much as 2.03 times the rate of increase seen in the nonholiday season, that among discount stores issuing cards.

About 50% of the typical “store card” base consists of nonprime consumers, according to Nidhi Verma, senior director of research and consulting for TransUnion.

The extra lift seen in 2015 came from across the entire spectrum of consumer credit risk types. However, the largest lifts TransUnion saw in its study was among subprime customers (those below 600 on the VantageScore 3.0 scale) and near prime (between 601 and 660).

TransUnion projected that increasing card account openings among these segments would push overall delinquencies up modestly from 2015 levels. The company projected that the 2016 fourth quarter delinquency rate would rise to 1.40% in 2016 and 1.44% in 2017, versus levels of 1.30% in 2015, 1.21% in 2014, and 1.21% in 2013. Verma pointed out that while the delinquency rates are going up, they remain at historically lower levels.