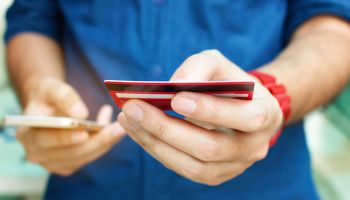 Any worries that the American consumer would become overly conservative about credit card debt, post crisis, have pretty much been put to rest. Whether the means be literally plastic, or some other form of tapping card account credit, the appetite for this borrowing is like that pink battery bunny. It keeps on going.

Americans have 416.5 million credit cards, and 174.9 million of them have access to at least one credit card, according to first quarter 2018 figures from TransUnion. Those totals represent increases of 22.5% and 17.1%, respectively, over first quarter 2012 figures. Average credit card debt per borrower hit $5,472 in the first quarter, an increase of 3.3% over 2012.

Serious card delinquencies have been rising in this period. (This is defined as 90+ days past due.) At 1.78% for the first quarter, they have edged out delinquencies seen in 2012, at 1.77%. TransUnion points out that this is still below the ten-year first-quarter average of 1.91%.

Is this growth cause for alarm? TransUnion downplayed concerns, for three reasons:

• Issuers have been relatively conservative over the last five quarters. They have issued more credit to lower-risk consumers than to higher-risk categories. Matt Komos, vice-president, research and consulting, at TransUnion, says this reflects a portfolio re-balancing underway at many card issuers.

• Issuers have set lower credit limits to consumers in most risk categories than in prior years.

• TransUnion believes that it’s a positive economic sign that more consumers have access to credit. In that light, the company said, it’s significant that while delinquency rate are growing, they are growing relatively slowly. TransUnion said that growth rates are below those seen immediately after the Great Recession.

Originations—which are one quarter in arrears for statistical accuracy—rose modestly, growing 1% in the fourth quarter of 2017 compared to the same quarter in 2016. “This was notable because it was the first annual increase observed in the five quarters since Q3 2016,” TransUnion said in a statement.

Lending without delinquencies is never a card issuer’s goal, according to Ezra Becker, senior vice-president, research and consulting, at TransUnion. Growth typically sees some increase in delinquencies, Becker said in an interview with Banking Exchange.

“This is not a worrisome time, at this point,” said Becker. Consumers’ willingness to put on more cards and more card debt indicates their confidence in the economy, he added. He pointed out that the flip side of the delinquency statistics is that many card borrowers are handling their debt satisfactorily, so far.

Overall, said Komos, “the consumer credit market continues to perform well, and we do not see any indicators of concern in the short- to mid-term.”

Millennials, once thought to be rather debt-averse, appear to be adapting to the credit card culture, with Gen Z coming up behind. Meanwhile, Gen X borrowers are holding the highest card balances among all generations.

Becker said he believes trends have debunked the thought that younger generations won’t pay with credit cards. He acknowledged that younger consumers have flocked to debit cards and other means of payment, such as Zelle and Venmo. However, he said the trends in the table above support the belief that they want access to credit, not just payment convenience, and that they need to be able to use credit to balance their cash flow and overall finances.

Highlights from other credit areas covered in TransUnion’s update:

• Auto lending. Tighter underwriting and economic improvement in the oil states appears to be helping to improve auto loan delinquency measures. Six of eight oil states saw delinquency rates drop in the auto sector in the first quarter of 2018.

Overall, “the slowdown in auto loan balance growth is largely due to the decline in originations, as lenders continue to tighten their underwriting requirements and rising interest rates put a slight damper on demand,” said Brian Landau, senior vice-president and automotive business leader

• Mortgage lending. Year-over-year serious mortgage delinquency rates, defined as over 60 days past due, have dropped for 19 straight quarters since the third quarter of 2013. TransUnion continues to watch trends in states hit by 2017 hurricanes, because forbearance programs result in those loans being reported as current regardless of actual payment trends.

Joe Mellman, senior vice-president and mortgage business leader, said that payment trends have come to be more like traditional patterns seen before the mortgage crisis period. As time goes on, he said, mortgage lenders may begin to cautiously extend more credit to non-prime borrowers.

• Unsecured personal loans. These have been growing in popularity, in part due to the influence on consumers of marketplace lenders offering easy applications online. The average balance rose to $7,986 in the first quarter, up nearly $300 over the year earlier period. Performance has been strong even as growth continues to rise in both number of loans and total balances.

“We observed continued strong growth in unsecured installment lending at the beginning of 2018,” said Jason Laky, senior vice-president and consumer lending business leader. “The acceleration in the number of loans offered to consumers is a result of low unemployment and a favorable regulatory environment.”

Laky added that “online short-term lenders now feel that they can enter this space, and more traditional lenders have been doing so for the last few quarters.”

This stiffer competition has convinced many lenders to increase use of alternative data types, according to Laky.

However, gravity still applies to credit.