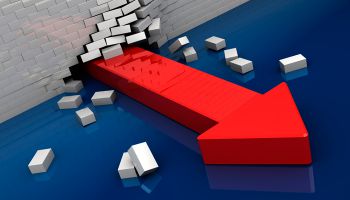 For the seventh consecutive year, U.S. banks in 2016 collectively shuttered more branches than they opened, extending what analysts say is an enduring trend that reflects customer behavior.

Fewer financial transactions occur in physical locations as customers increasingly do more of their banking business online, providing banks reason to pare down branch networks and reinvest the savings into their digital offerings, analysts say.

Where has all the business gone?

Banks for years have reported that foot traffic at branches has steadily declined in a digital era in which Americans handle ever more of their daily tasks online and via mobile applications, including routine banking activity.

"I think it absolutely continues to be about declining traffic in the branches and the shift of that traffic to online," James Bradshaw, a bank analyst at Bridge City Capital LLC, said in an interview. "It's an unstoppable force. … Anyone who takes their eye off of that ball is making a big mistake from a long-term perspective."

At the same time, Bradshaw added, banks have grappled with a protracted cycle of ultra-low interest rates, providing them extra incentive to contain costs by closing branches. A steady level of M&A activity has further contributed to the overall reduction in branches. When one bank acquires another, it typically reduces the combined company's expense base by closing overlapping branches, generating savings, and boosting the deal's profitability.

JPMorgan Chase & Co. downsized its branch network by a net 164 locations in 2016, more than any other U.S. bank. Summing up the driving force behind the changes, Chairman, President and CEO Jamie Dimon put it this way at a conference last month: "It is more and more digital."

Others notably active on the branch reduction front last year: Bank of America Corp., Capital One Financial Corp., KeyCorp, PNC Financial Services Group Inc., and Regions Financial Corp. The largest banks typically lead the charge simply because they have the greatest number of branches and therefore generate larger numbers of cuts. But many smaller banks, too, are continually trimming their branch counts. 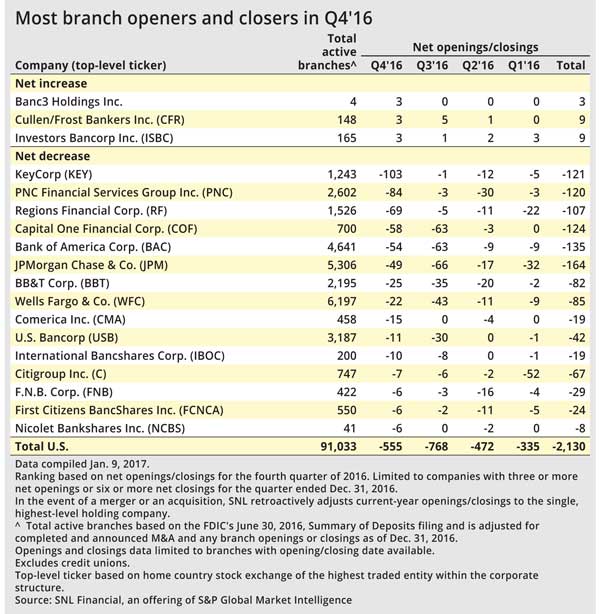 Analysts noted that the interest rate environment is changing, with Federal Reserve policymakers raising their benchmark rate by 25 basis points in December 2016. Fed officials have indicated in their projections that they could lift rates three more times in 2017.

The national unemployment rate has been at or below 5% for the past year. Demand for workers has resulted in higher wages. Average hourly earnings in December increased by 10 cents, to $26.00, and for all of last year earnings were up 2.9% from the previous year.

If that positive job and wage momentum continues, and if policymakers followed through with three rate hikes this year and tacked on more in 2018, analysts said, it would at some point prove enough for depositors to start shopping for better rates. When that happens, banks will find themselves competing for core deposits, and the role that branches can still play in banks' sales and marketing efforts could motivate some lenders to at least slow down their branch consolidation efforts.

Bankers such as Dimon have long maintained that the industry is not abandoning branches altogether. Locations in high-traffic areas, in particular, still function as important billboards and destinations for customers to open new accounts or apply for substantial loans. 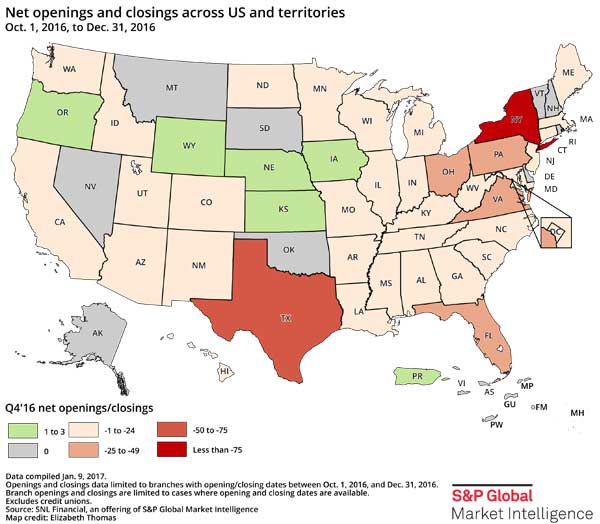 Analyst Timothy Coffey of FIG Partners said in an interview that, in an "extreme" case of heated deposit competition, enough banks might consider reversing course on branches to alter the long-running trend.

"But we are a long way from that," he added. "My gut tells me banks continue to recognize the benefits of being more efficient and continue to downsize branches."

Bradshaw agreed. He noted that bank stocks have rallied over the past couple months in part because of investor optimism that President-elect Donald Trump's pro-business agenda will provide additional fuel for rate increases. But Bradshaw said changes in Washington usually take several months, if not years, to materialize and significant uncertainty enshrouds any new White House.

"I understand the bull case," he said. "But we seem to have things set up for unrealistically high expectations." As such, Bradshaw said, bankers are likely to remain focused on lowering costs in the near term, including expenses tied to physical locations.

"We have not shifted from defense to offense yet" when it comes to branches, Bradshaw said. "Not even close." 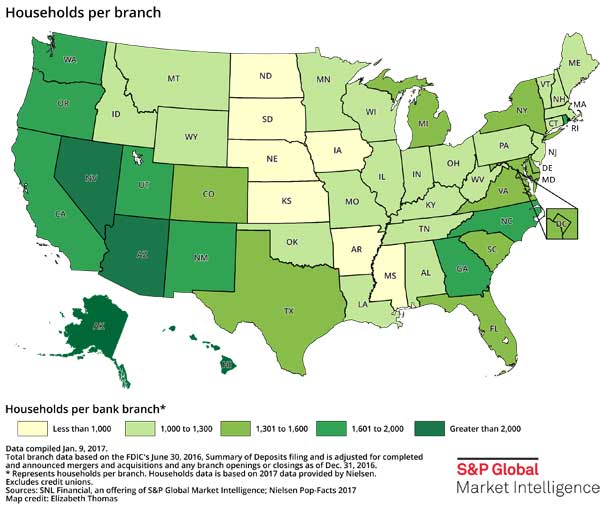