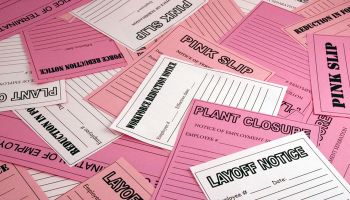 Last week we began a two-part series on why bankers are fired. Of the four broad reasons (competence, economic conditions, culture and aberrant behavior) I expressed my view that competence is not a leading cause of turnover and that economic conditions, while a significant causative factor lately, is waning as a significant contributor to turnover.

This week, the focus will be on corporate culture and personal behavior.

The company you keep ... or that keeps you

Corporate culture, to be adequately discussed, requires its own vocabulary and a consensus on terms and collective behaviors that we consider to be "culture."  We don't have an opportunity in this short space to do more than point out contributory causes of culture to turnover.

We start, though, with a simple definition of culture as "the anticipated reactions of a group to events and circumstances."

We have all probably felt the difference between a sales culture and a service culture. They are not completely exclusive, of course. But the sales culture values production above all else, while a service culture is focused on customer satisfaction. It's also possible to detect sub-cultures within banks where the overall culture may be properly described as service but within certain departments or branches a sales culture predominates.

The important thing about culture is its ability to sustain and reinforce certain types of attitudes and behaviors. That's an important and largely a constructive force for a bank. However, any culture can get sloppy and drift away from its original and intended roots.

The principal force of culture is to promote a uniformity of attitudes and behaviors. In the long run, significant "outliers" in the cultural sense are eliminated. That's generally either by forced terminations or an ultimate realization by the individual that the environment is not hospitable to his or her long-term career goals and work satisfaction.

The most startling example of this seen during my career was a boss who was then an executive officer of my bank. The bank's executive suite was the entire third floor of a downtown highrise. My boss had recently assumed a somewhat expanded new role and high title. One day I ran into him on the elevator and he was carrying a large box of materials from his desk top.

He explained that he was moving that day to his new office on 3. But then, remarkably, he said, "I don't belong there. I'm too loud."

If I ever heard truth, it was that day. Yes, he was loud. He was garrulous, friendly, well met, and a very physical sort of man who could hardly talk to you without his arm around your shoulder. Everyone to the last person loved him. And they would have done anything for him.

My boss left a year or so later out of frustration, in the midst of some extreme problem asset issues and amid management turmoil. He accepted a job as CEO of a similar-sized bank in a nearby state where he worked happily and successfully for three or so years. Then, the grapevine told us, he was fired for sexual harassment. Apparently he put his arm around a female staffer (his preferred way of addressing anyone, male or female) and was dismissed upon the employee's claim of harassment. There's no defending that sort of behavior but it wasn't malicious or premeditated. It was just the man himself.

This example has elements of both culture and personal decorum and I suppose any one of my four basic reasons for losing one's job could blend into another depending on specific circumstances.

Smile when you say "Yankee," podner

Another culture example that I still chuckle about many years later occurred in Midland, Texas. I was quite new to the bank and talking with a small group of credit committee members in the hallway following a meeting.

In addition to me, from the East originally myself, there was a man who had grown up in Connecticut and was brusque, business-like and sort of "standoffish."  The two or three others that morning in that brief conversation included home-grown Midland bankers who would fit any Hollywood casting model of a typical Texan.

Bill, of Connecticut, finished his remarks and left.

In an audible voice, one Texan uttered, "That damned Yankee."

Then he spotted me and was immediately flustered and embarrassed and blurted out to me, "But, Ed, you're a good Yankee."

That told me volumes about the culture. While it didn't offend me, it did put me on notice that I would be judged by my co-workers by criteria not normally contemplated in any credit-related job description.

Personal behaviors are a fertile source of terminations for bankers. This is why banks feel they need Codes of Conduct statements. It's so employees may have a clear sense of acceptable behaviors.

Most of us think about conflicts of interest as the focus of these statements and codes but they can be much broader than that.

Will a community bank tolerate public intoxication by an officer or employee?

What about a senior officer, married, consorting with a staffer in a public and non-discreet way?

Some environments are probably quite tolerant of such behaviors, while others are not.

The simplest code of conduct statement I ever saw, while it covered two or three pages in length, began with the opening declaration that the company "shall tolerate no employee behavior that causes embarrassment to the bank."

Then there were some specific examples of the range of what that simple principle meant.

It was remarkably clear to me, though I have only seen this principle state once this way and wondered why others have not picked up on the simplicity and clarity of the declaration.

One wonders sometimes why people have to be told such things. Then one remembers reality ...

My years in the business have brought me into situations where the president of my bank was consorting with a very attractive platform financial services representative. It was a mess in terms of the morale implications--and one was either offended or amused by the brazenness of the affair. The man was weeded out before too long but surprisingly to me not over his philandering but over a series of disagreements with Credit Administration over the adequacy of the grades of some questionable portfolio credit.

Was our code of conduct not explicit regarding amorous behaviors?  I don't recall that it was and the ambivalence toward such situations seemed problematic to me.

In another situation, my bank's holding company was recruiting experienced and relatively senior candidates for a variety of senior "big bank" and holding company slots. As part of the recruiting package, the bank maintained under lease three or four fully furnished corporate apartments that were available for transitional living (a month or two) for newly hired staffers and their families.

Imagine the shock and indignation of the executive management when the bank's auditor noted that the holding company's SVP of human resources, a relatively recently divorced man, had occupied one of the apartments at no personal expense for over a year.

In hindsight, personal decorum is easy to understand as a source of turnover, though it's a disappointment to see lapses among coworkers. The cultural misfit is also often an evident sort of problem. It's too bad that we don't have better or more thorough ways of vetting those possible differences.

Where you fit and where you don't

Many years ago, my employer at the time made available a corporate psychologist on retainer for individual employee assessment and evaluation. I volunteered for such an assessment but was disappointed.

I spent two or three hours completing personal history and interest forms and had a half hour meeting with the psychologist.

Later I was given a multi-page report that made certain very definitive conclusions. I agreed in varying degrees with all of the assessments but still resented the idea that anyone could represent to me such a list of definitive characteristics with such meager input.

Others in the company had similar reactions. Yet I wondered more than once what role any of that may have played in my remaining days with the company.

By the way, I left my Florida job for Texas because I was in a regional credit job 200 miles upstate while all the good jobs in a very extensive reorganization were going to headquarters people.

Never again, I vowed, would I permit myself to be out of sight and out of mind.

More in this category: « Teflon calling officers, or, why do people get fired (or don't)? Your community's stake when the local bank sells »
back to top