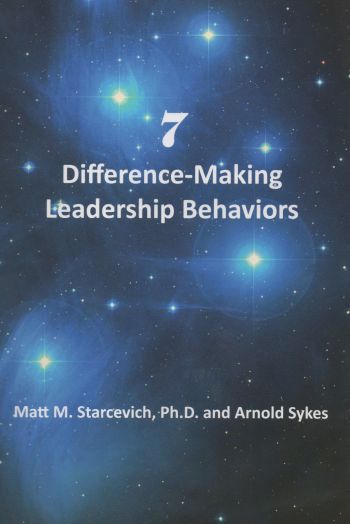 In this book, Charles Chandler, chairman and CEO of Intrust Bank, a 109-year-old bank based in Wichita, Kan., reflects on the importance of a leader with strong character. His predecessors, who happened to be his father and grandfather, ingrained this in him.

At one point in his career, Chandler began to question if his employees still thought character was as important to the bank as his father and grandfather had believed. To explore this issue, the bank formed a committee of employees (no executive managers in the group). The committee’s task: Devise a list of  “Character Qualities” for an employee to be successful at INTRUST Bank.

Chandler says he couldn’t have been more pleased when the employees came up with their list of 12 qualities. Those qualities were very much aligned with the qualities his father and grandfather had established over the years. Chandler believes people are so relieved when they find organizations with such values that they flock to it.

So much talk gets talked about “tone at the top.” But setting 7 Difference-Making Behaviors apart from many other business book is that many of the CEOs interviewed are, or were, successful bankers who truly do set such tone. It’s helpful to see some ideas on doing better business drawn directly from our own industry.

Authors Starcevich and Sykes collectively have years of experience as consultants for large companies such as Phillips Petroleum, Federal Express, and Koch Industries, and for a myriad of community banks throughout the country. Starcevich and Sykes began to see a recurring pattern among their most successful clients: Top leadership was what made them perform so well when compared to peers.

This leadership came not just from the managers within the company, but included a defined leadership style that came from the very top leader in the organization. This book identifies the seven key factors observed.

In order to quantify the leadership qualities defined in this book, the authors interviewed 11 individuals running highly successful businesses. Thomas Legan is one of the individuals interviewed and ironically, the bank where I work sits less than five miles from Coppermark Bank (now Prosperity Bank) where Legan served as the president and CEO for over 30 years. I can personally attest to the success of Coppermark Bank and concur with the authors. Tom Legan is a great example of an exceptional leader making a difference within both his bank and his community.

The following boils the authors’ 7 key behaviors down to essentials:

All of the leaders interviewed shared how their company values were the guiding principles with which they managed their organization. The Intrust story that I opened this review with epitomizes this point of the authors.

Even though all of the leaders had highly profitable businesses, profits were never mentioned as the number one priority. The theme always came down to doing what is right for the employee and the customer.

When hiring, these companies always look for people with the right attitudes and core values to fit within their organization. If employees have the right mindset, these leaders all believed, they could train the employees to do their daily job.

Interestingly, the normal tenure for employees at these companies was 20-30 years.

This proves “Mo” Anderson’s theory that “People with common values want to work together; values are a magnet. They often feel like they have found a home.”  Anderson is vice-chairman and CEO of Keller Williams Realty International.

Each of the 11 leaders had an uncanny ability to see the potential in their employees even if the employee was unaware of his or her potential. Therefore, they were able to promote and develop talented people from within their organizations.

The other characteristic that stood out among these leaders was their acceptance of employee’s mistakes. Mistakes represent the cost of learning, according to Thomas Legan, president and CEO of Coppermark Bank.

4. Dim your own headlight.

All of these leaders ran very successful companies and had much they could brag about. Yet none of them was boastful. They all had a sense of humility and, in fact, they listened more than they talked.

When they did talk, much of the credit for success of the organization was give to others.

5. Commit to all stakeholders winning.

An employee of one CEO told of a time when the CEO expressed in a meeting his overwhelming sense of responsibility for the company and employees when he stated, “To whom much is given, much is expected.”

All of these leaders had a process in place for review of their performance as CEO. Sometimes the review was informal, although some CEOs had actually hired outside consultants to analyze their performance and report back to the board of directors.

All wanted to know how their leadership was affecting their company. It mattered to them that their employees knew they didn’t have to be “yes” people. They cared that employees knew that a different idea or opinion would be welcomed and respected.

Robert Gandy, president and CEO of First National Bank of Edinburg, Texas, refers to his e-mails to employees as “rambling observations,” but embedded in each e-mail is some core lesson about what the bank is doing and why it is being done.

We all know that to be successful parents you can’t tell your children to “Do as I say, not as I do.” That works on the job, too.

The authors state, “The actions of the leader of the organization are viewed by many as his/her single greatest source of influence when it comes to their followers.”

Each of the leaders felt communication directly from the CEO to the employees was paramount, since uncertainty is what worries many people. Most leaders cited direct communication with employees at a minimum of monthly, while many had weekly communication.

Each of these leaders worked very hard to be transparent with their employees. They also emphasized building genuine relationships with cmployees.

A final note: One of the characteristics common to the CEOs studied was their desire to keep reading and learning. This book, short and direct, would be good to read if you also enjoy reading books on leadership.

If you'd like to join our corps of book reviewers, please email Steve Cocheo, executive editor and digital content manager, and describe the types of books you like to read for business, the most recent such book you've read, and whether you have written for publication before.