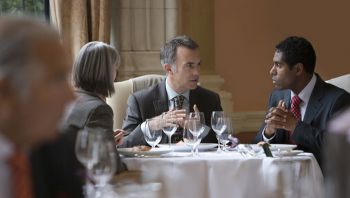 Are these people discussing business or community service? Blogger Ed O’Leary has an interesting answer to that.

All of us are reminded this season of the year that it’s time for the United Way annual campaign. It’s a big deal in Albuquerque, where I spend part of my year, probably as much for the size of the city as it is for the needs that the drive addresses.

In these days of busier schedules, smaller staffs, and challenging conditions, where will bankers find time to participate in such efforts as United Way? I’d argue that you consider the bigger picture before you turn down any such opportunity.

Becoming the people that people see

I was about three years into my tenure as CEO of the Albuquerque bank and had already been recruited onto the United Way Board of Directors. And I’d accepted election as Treasurer of the corporation.

What I was slow to realize was that I was being “managed” into position as a metro area-wide drive chairman for the following year.

Sure enough, the invitation came. While I knew it was a big job, in the sense that it would be a lot of work, I liked the people and had long since been convinced of the value of such a community resource as United Way.

Frankly, my principal reason for taking the job without a lot of “arm twisting” was my understanding that our bank’s community contributions budget was quite limited, compared to one of our major competitors that had just completed the acquisition of a large locally based bank. The new name in town was aggressive—and smart—and it had a big checkbook.

Competing with them budget vs. budget was impossible.

So my colleagues and I made a huge effort to be visible in the community with our service in personal, rather than mainly financial, terms. Our two large competitors didn’t quite see it the same way, so our officers and staff pretty soon became dominant in terms of our visibility.

Even our personal employee incentive programs provided for some financial recognition for each employee who did outside community service.

Fortunately, we were truly a collection of colleagues who understood the value of service in both personal and business terms.

Visibility and opportunity travel together

I think of this today because I read within the week a story about Mark Fields, the chief operating officer of Ford Motor Company. Alan Mulally, Ford’s CEO, is expected to retire within the next several months. Fields is widely believed to be in the running for the top job. He was recently named United Way Drive Chairman for southeastern Michigan. A Wall St. Journal article candidly noted that this appeared to be a way to give an “inside person” more outside visibility.

Based on my personal experience, that’s true in spades. The visibility is considerable.

And it’s not just about you, the volunteer banker.

For about two and a half months, the active and very public part of the drive, I had lunch with bank customers or prospects virtually every day of the week at the country club. I received special treatment from the staff as a daily customer and usually one with several guests.

I loved sitting out in full view in the main dining room talking with senior management members of some of my competition’s best customers.

What few others knew was that we were talking United Way business and not First Security Bank business.

Well, not entirely. I developed a line with everyone—customer or prospect—that I did not take a United Way approach to their banking business.

Most everyone responded with a chuckle, but more than a few remembered it and remind me of this even years later. I acquired the reputation of asking for the business and guess what? I sometimes got it—though it often took more than one lunch and more than one simple ask.

The drive that year was a financial success. We topped our goal by about 5% and reversed a negative trend of the previous couple of years.

And we got most of the officers of the bank into the habit of community service. It’s momentum that’s not easy to generate, but it’s pretty easy to keep it up when everyone realizes how much fun it is.

Work is work. But work when it’s useful and done in contact and concert with interesting people has its own special rewards. We sometimes need to be reminded of that.

It’s also important to remember that this is what community banking is mainly about. In United Way work we are building our infrastructure of community relationships and strengthening the human infrastructure of our social services at the same time.

What endured was a reputation that our bank and its people were solidly involved in community service and could be counted on to populate important as well as useful boards and committees throughout our trade area. It generated the sort of respect that you can’t measure very well. But it’s real enough and pretty durable too. And the banking public notices everything.

My father ran the United Way drive in Boston in 1950 as the paid executive. He loved the job and told many amusing stories years afterward about the people he ran into and what they said and did.

I agree that the job was fun, useful, and rewarding and am pleased to have contributed my part so many years later.

And none of us should forget that it’s also good business.

More in this category: « Bank size, credit limits, and investors’ exit options Fighting the dysfunctional office »
back to top