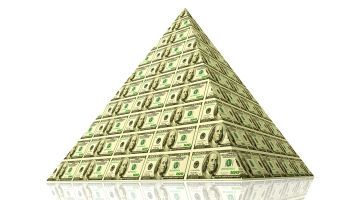 New Crowe Horwath LLP study finds compensation levels rising for both officers and nonofficers in the effort to recruit and keep the best players.

Every financial institution facing a competitive market will continue to require more effective compensation strategies to attract and retain the talented officers, managers, and employees it needs. Understanding the marketplace for compensation is fundamental to deploying such a strategy. Every year the Crowe Horwath LLP Financial Institutions Compensation and Benefits Survey provides key information to support successful compensation strategies.

Crowe annually surveys financial institutions throughout the U.S. concerning compensation trends; salary and bonus benchmarks; and current practices related to benefits, incentives, director compensation, and other human resource issues. The 2013 survey, which included input from 293 organizations, reveals several noteworthy trends that will be explored in a series of articles, beginning with this overview of changing compensation strategies among banks of various sizes.

Future articles will explore these trends in more detail, along with key metrics and leading practices.

Competitive compensation: what it means, why it matters

An aggressive compensation strategy is one of the primary tools available for these purposes, so it is not surprising that the past year has seen a noticeable upsurge in the number of institutions that are using “above-market” compensation strategies as part of their recruitment and retention efforts.

In 2013 the number of respondents in the compensation survey who reported using an above-market compensation strategy jumped sharply—from 9.4% in 2012 to 12.7% in 2013. In very general terms, larger banks remained somewhat more assertive in this regard, but the gap between them and smaller institutions shrank noticeably in the past year (Exhibit 1). 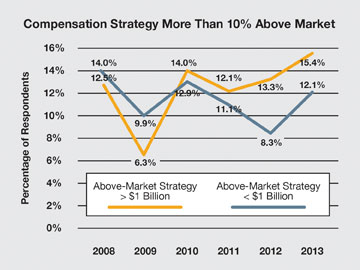 In 2013, 15.4% of institutions with more than $1 billion in assets pursued above-market compensation strategies, while only 12.1% of institutions with less than $1 billion in assets pursued such an approach—a gap of 3.3 percentage points. A year earlier, however, the gap was a full 5 points, an indication that smaller regional and community banks are becoming more aggressive in their compensation strategies.

Another broad observation that can be drawn from the 2013 survey is a notable disparity between expectations and reality in terms of future pay increases.

Reflecting increasing inflation expectations and gradual recovery from the Great Recession, banks adjusted their salary ranges upward at a faster pace in 2013, and they expect the acceleration to continue. The published pay ranges for officer positions increased by 2.08% in 2013, almost double the rate of increase from just four years ago. Pay ranges for nonofficer positions increased 2.06% in 2013 (Exhibit 2). 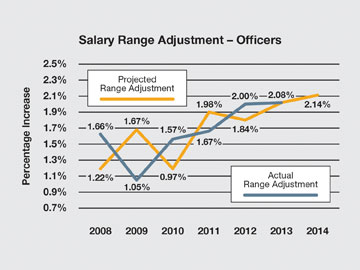 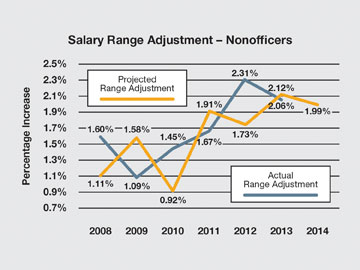 Note, however, that compared to the published pay ranges offered for officer and nonofficer positions, the salaries that were actually paid to these employees present a more consistent picture and a more rapid rate of increase (Exhibit 3). 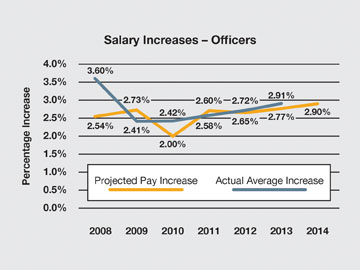 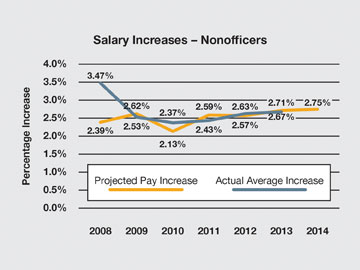 Virtually every organization attempts to link pay to performance—either at an individual or a group level. Among financial institutions, the Crowe survey indicates that smaller banks do a slightly—but not dramatically—better job of differentiating pay among average and above-average performers.

In banks with less than $1 billion in assets, salaries for employees who had earned above-average performance ratings increased by an average of 3.9%, a noticeable acceleration from the previous year. For average performers in these institutions, the annual increase in the 2013 survey was only 2.5%, the same as the previous year (Exhibit 4). 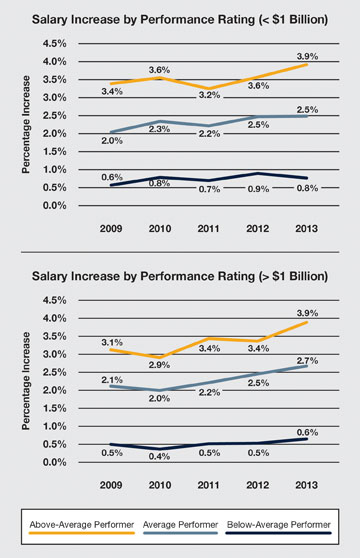 One primary indicator of pay effectiveness is employee turnover. Here again there are notable differences in the trends based on institution size.

At banks with less than $1 billion in assets, turnover among officers peaked at 6% in 2011 but has been trending downward since then. Nonofficer turnover in these banks also trended downward noticeably in 2013 (Exhibit 5). 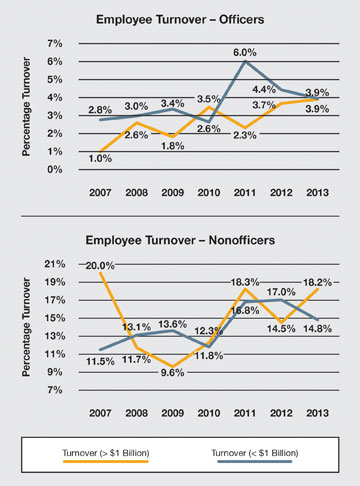 In large institutions, on the other hand, officer turnover has been climbing since 2011, and turnover among nonofficers jumped sharply in the past year.

Looking at the longer term, it can be said that employee turnover levels generally have climbed in recent years, after declining significantly during the depths of the recession.

While some of this turnover has been driven by ongoing staff reduction efforts and changing bank staffing strategies, a significant portion of it has been voluntary, which could reflect a general sense among employees that the financial services industry is recovering, and there is less risk in pursuing new opportunities.

Financial institutions might draw several conclusions from these preliminary observations: perhaps most significantly that as the competition for talent intensifies, the importance of competitive compensation programs undoubtedly will continue to grow. Banks of all sizes are revisiting their compensation programs and, increasingly, are turning to above-market strategies and performance-based compensation.

In the next article in this series, we will examine which positions have gained and lost the most in recent years and what types of skills are most valued—and most rewarded—in today’s financial services industry. The entire survey is available for purchase here.