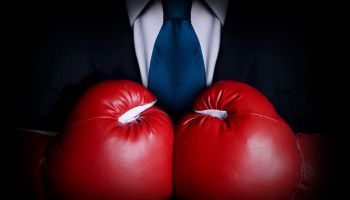 If your bank hasn’t got a team that can work well together, what exactly have you got, asks blogger Ed O’Leary.

The other day I attended the deposition of the defendant in a lawsuit. The bank, my client, is the plaintiff and is suing for collection of a large item that was charged back to the customer’s account. But the details of the issues being litigated are not the point of this story.

Rather, I find myself musing about how angry and hostile the defendant was that day. It’s not that I don’t understand how workplace anger can occur. But it seems to be occurring with a frequency and an intensity that have if anything increased in recent years.

Think of the implications of this statement. When we’re not getting along, then we’re not performing as we should. This is quite independent of our basic competency in our functional specialty. The ability and willingness to get along with others is an unstated component of every job description.

Yet we seem to have no sensible or systematic way of approaching a solution to this sort of work place dysfunction.

How much of this goes on in your shop?

Personally, I think the problem is considerably understated and underappreciated. Bosses usually figure out how to fix the problem of hostile behavior and overt conflict. Somebody typically gets fired, sometimes sooner than later. But eventually the problem is fixed.

But what if the dysfunction exists in interpersonal relationships in a low-key way and is difficult for the higher ups to identify, let alone address?

Over the years I’ve seen much disrespectful behaviors of seniors to subordinates. There are often mechanisms to deal with this, though no doubt much more of it is tolerated than should be and directly contributes to turnover that is costly as well as unnecessary.

However, there’s a different kind of disrespect that can be virulent in some workplaces and it’s not between senior and subordinates. It’s about peers relating to one another within the workplace. They may be at different levels within the organization, but they are not in direct reporting relationships.

These issues often manifest themselves in a mindless indifference to the other person. They undermine trust and respect, two behavioral pillars of any sound workplace foundation.

Then there is bullying, a behavior that assaults both traits. Studies indicate that most bullies are men, most victims are women, and that two thirds of the victims usually end up leaving the organization.

One doesn’t have to be in a direct reporting relationship to be bullied. It’s amazing how much of this goes on and is simply ignored by turning a blind eye. Employees figure out quickly enough what’s going on by observing the interpersonal relationships and either encourage themselves in such behaviors or accommodate themselves to the environment. It simply never seems to get fixed.

When people break the Golden Rule

“None of these problems under my bank’s roof,” you may think. Oh no? Do any of these kinds of people seem familiar?

• Mr. Center of the Universe. At The Bank of New York, I worked on the lending platform with a young, aggressive, self-absorbed vice-president and lender. He had one direct report—his secretary (and she was at least 60 years old and quite capable of taking care of herself).

This VP bullied loan staff in central funding, in the credit department, and any of the numerous support functions related to overall customer service throughout the bank. I’m sure he tied lots of stomachs into knots with his arrogance over the years. Yet he never got called out on the behavior because he was at some level careful where and how he displayed his unattractive behavioral traits. He was also a high producer and banked some of the best customers of the bank, including a director and CEO of a Fortune 500 company.

• Ms. I Can Make Your Worklife Hell. In one bank where I worked, there was a middle-aged lady who supervised the note case who did everything by the book. She cut no slack, enforced every rule beyond common sense and reason. And she was generally uncooperative unless one approached her as a supplicant.

She had a junior title so it’s not that any of us were scared of her. But we knew that if we got on her bad side, she’d retaliate with slow service or an obtuse emphasis on the rules. We’d never feel the knife … only see the trail of blood after the fact.

• “Jets” versus the “Sharks.” In Albuquerque I had to arbitrate between two warring vice-presidents. Directly, that was easy enough, as I’d as soon have fired either one of them as looked at them for any misbehavior I spotted—and they knew it.

But what I couldn’t really gauge is whether the personal animus affected others who were friends of either party. It was sort of “the enemy of my enemy is my friend.”  Both employees were valuable, each in her own right, for technical competence and industry. But each tended to tear down the essential trust and comity that good working relationships have to engender and preserve to be effective.

I ultimately acted to terminate one of them and in hindsight, should have done so sooner than I did. These were adults acting like children.

Putting an end to bad behavior

Bad behaviors don’t need to be tolerated. But they do need to be identified before they can be repaired. It is also essential to create a vocabulary with which to discuss these issues with understanding and comprehension among all parties.

I’d figure out how to insert these words and what they mean into mission, vision, and values statements, employee evaluations, rewards and recognitions, employment applications, and, where possible, into routine inter-office communications.

I’d also insist that these behaviors be modeled from the top of the house down.

Senator Claire McCaskill of Missouri made an important and telling point earlier this year in a Senate Armed Services Committee hearing on sexual abuse in the military. One highly decorated and very senior general touted the plan of his office to conduct much more extensive training on the subject.

Senator McCaskill interrupted him and indignantly disagreed. She said that some very public firings of perpetrators will do much more than hours of training.

It’s hard to disagree with that.

Yet I think the truth is that you have to do both and do so simultaneously.

The costs of workplace dysfunction are high and the legal consequences of ignoring these issues are manifesting themselves in increased levels of compliance risk, legal risk, and reputation risk.

Then, too, there’s the hidden cost of suppressed anger and frustration on the part of the workers who know exactly what’s going on but feel powerless to do anything.

Banking is hard enough today without being at war with ourselves. It’s time to grow up and behave like adults.

More in this category: « Doing well by doing good Risks over the horizon, and how to prepare »
back to top