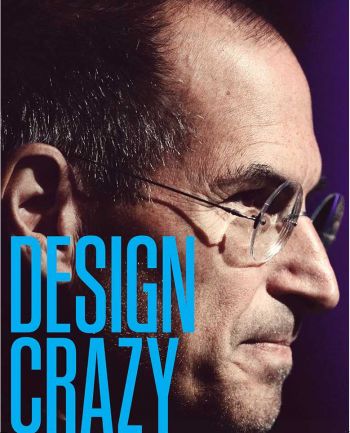 Looking for a deep dive into the inner workings of the design world of Apple and Steve Jobs, but don't want to read the two-pound Steve Jobs by Walter Isaacson?

Then Max Chaftkin's Design Crazy is for you.

Rather than a narrative, this book is really a series of interviews of those closest to Jobs and revolves around the thought process which has allowed to Apple create some of the most provocative products in history.

Chafkin worked with a team of Fast Company reporters, and the book is based on interviews with around 50 former Apple executives as well as current insiders willing to share their insights into the mystique of the company and of Jobs.

Through these interviews , the reader develops an intimate understanding of how Jobs really saw the world through a different set of eyes. But something even more interesting emerges.

In his introduction, Chafkin states that “What we found is that the greatest business story of the past two decades—how Apple used design to rise from near bankruptcy to become the most valuable company in the world, while bringing sophisticated computers to hundreds of millions of people—is deeply misunderstood.”

Apple’s famous design culture had other sources beyond Jobs, and were not just a grand vision of its mystical CEO. The story of Sir Jonathan Ive, an Englishman who is senior vice-president of design at Apple, for instance, materializes in the many interviews that make this an incredibly fast read. Ive has been at Apple since the early 1990s, and Chafkin notes that Jobs himself gave Ive a good portion of credit.

Many of the myths about the company and its leader are somewhat dispelled, and a sense of truly understanding the journey from fortune to almost bust and back again are highlighted.

Building on the known

While most of the body of this book will be familiar to all, the personal viewpoints of each different character bring to life the challenges that Apple faced in designing some of the greatest products ever sold. For anyone that has a product or service to be sold to the masses and who look to touch their consumer in a way that differentiates them from the competition, this book is a worthy read.

An amazing end to this story is told by all those who now have an impact on so many other products from coffee machines, to software companies, to transformative products like Tesla.

This short read brings to light the behind the scenes muscle at Apple that made innovation happen. It also leaves the reader understanding the importance of having a leader who is a visionary—one who gets the team to buy into a vision and creates a culture that allows innovation to happen.

If your role includes leadership and management, Design Crazy will leave you thinking about whether you are harnessing your teams’ ability and aligning that talent with a vision of innovation.

And yes, you can download the book on iTunes.

[Editor’s Note: You can read a portion of Design Crazy’s introduction on the Byliner website.]

More in this category: « High-stakes economics and how it impacts our lives Boarding the bus bound to Cooperation »
back to top