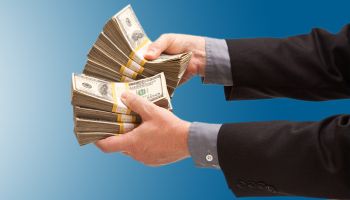 Smaller banks still have quite a bit of work to do to comply with the Basel III capital standards.

Examining Basel III as it stands

Smaller banks, institutions with less than $15 billion in assets, found themselves in better shape to comply with the final Basel III rules than the originally proposed capital standards, having the opportunity to count trust preferred securities as capital and avoid potential volatility in their capital ratios by opting out of a provision that would include unrealized gains and losses in regulatory capital.

However, at the end of the third quarter, they still had a capital shortfall to the Basel III rules in excess of $1 billion, and even a greater number of institutions fell short of the requirements than witnessed in the prior period. The capital shortfall just might become greater for some of those institutions, as they could face a capital hit should they have to divest disallowed securities under the Volcker rule.

SNL measured the capital impact of the final Basel III rules by developing a template that examined two severity scenarios. The "conservative" and "moderate" scenarios took into account provisions outlined in the proposed rules, such as new risk-weightings of assets and new deductions of certain items from common equity Tier 1. 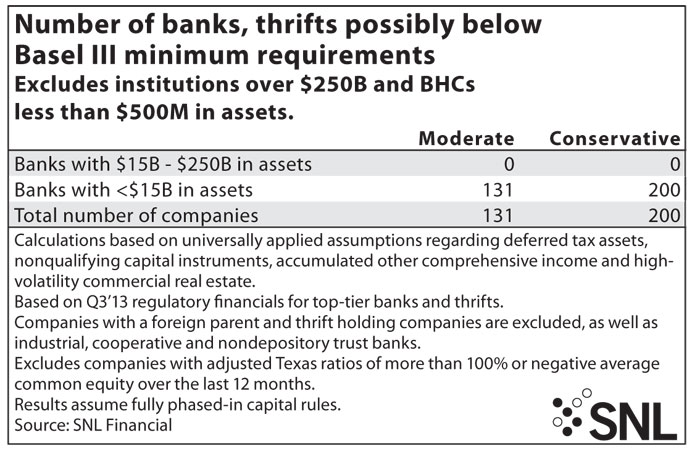 SNL's analysis found that the capital bases of large banks seem well-prepared for the implementation of the final Basel III rules. The industry's shortfall to the final rules at the end of the third quarter remained much smaller than it was when the rules were in the proposed form and is smaller than in the second quarter. Smaller banks, though, still have to build their capital bases to meet the Basel III standards as the phase-in period begins in roughly a year's time, the SNL analysis shows.

Banks with less than $15 billion in assets narrowed their shortfall to the final Basel III capital requirements in the third quarter, but the progress was small. Smaller banks have long lagged larger institutions, accounting for a greater portion of the industry's shortfall under the proposed rules despite their smaller size. In the second and third quarters, those institutions were responsible for the entire shortfall measured by SNL.

When excluding those institutions, foreign-owned entities and BHCs with less than $500 million in assets, SNL found no capital shortfall at banks with assets between $15 billion and $250 billion under the "conservative" scenario at the end of the third quarter. SNL found that no banks in that asset range had a capital shortfall at end of the second quarter, either, after coming up short for several quarters.

Assuming the full phase-in of the final Basel III rules, SNL found the capital shortfall of those institutions below the minimum requirement based on third-quarter data would be $1.42 billion, or 1.26% of their risk-weighted assets under the "conservative" scenario, compared to $1.55 billion, or 1.13% at the end of the second quarter.

While the size of the capital shortfall decreased from the prior quarter, SNL found that 200 U.S.-based banks with less than $15 billion in assets would fall short of the minimum Basel III requirements under the "conservative" scenario, compared to 198 at the end of the second quarter, while 131 banks would fall short under the "moderate" scenario, compared to 116 in the second quarter.

SNL's analysis found that banks falling short of the minimums should be able to build their capital to the required levels in a relatively short time, but the analysis found that the earn-back period had actually lengthened from the prior quarter. When assuming at least a 5% return on common equity, SNL found that banks with less than $250 billion in assets, excluding bank holding companies with less than $500 million in assets, could earn back their shortfall to the minimum capital requirements on a median basis of just 1.02 years under the "conservative" scenario and 1.36 years under the "moderate" scenario. Comparatively, SNL measured the median earn-back period for banks at the end of the second quarter at 0.99 year under the "conservative" scenario and 1.44 years under the "moderate" scenario.

The capital shortfall for the industry could possibly widen if banks are forced to divest certain disallowed holdings under the Volcker rule, particularly CDOs backed by trust preferred securities, or TruPS CDOs. Some observers believe that close to 90% of all TruPS CDOs would be disallowed under the Volcker rule as it currently stands. SNL found that the industry's exposure to TruPS CDOs stood at $3.58 billion at the end of the third quarter, some of which is held by banks under $15 billion in assets. Many banks reported unrealized losses on those positions at the end of the third quarter, and some have already announced plans to sell their TruPS CDO holdings.

Regulators said Dec. 27 that they are reviewing if TruPS CDOs could be exempt from the investment prohibitions of the Volcker rule, leaving some uncertainty over what actions banks might take in the wake of the new regulation. (Editor’s note: ABA continues to press the matter and has been issuing periodic updates to member banks.)

While banks' capital standing under the Basel III rules certainly remains an issue for many, the biggest issue for the industry seems to be how the capital standards could cause volatility in institutions' capital ratios. The final Basel III rules will require accumulative other comprehensive income, or AOCI, which captures unrealized gains and losses in available-for-sale portfolios to flow through regulatory capital at institutions with more than $250 billion in assets. Smaller banks will have the opportunity to make a one-time election to not include most elements of AOCI in regulatory capital.

As interest rates have risen off historical lows, banks, particularly the nation's largest institutions that will not be able to opt out of the AOCI provision under Basel III, have increasingly moved securities to held-to-maturity to mitigate the impact volatility in the markets will have on their capital ratios. The increased use of HTM will soften the impact of volatility, since banks are not required to make mark-to-market adjustments to their HTM buckets on a quarterly basis. Banks above $50 billion in assets have led the charge, increasing their HTM portfolios in the third quarter by 26.31% from the linked quarter, but some smaller banks that will have the opportunity to opt out of the AOCI provision have also followed the move. 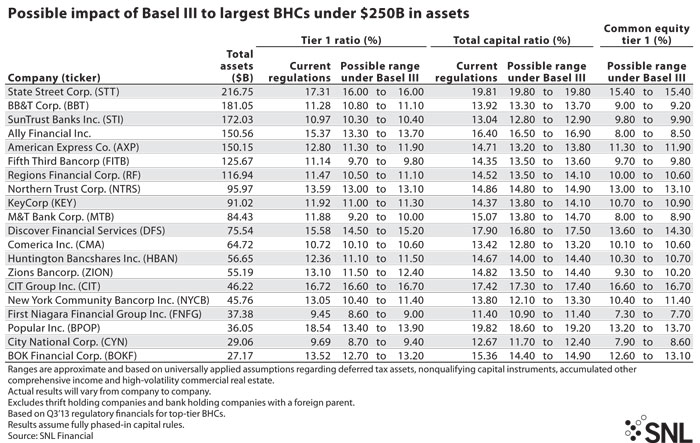