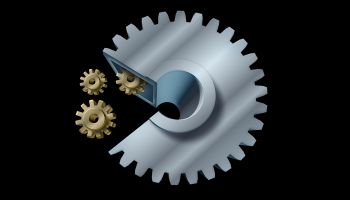 There is reason for caution, but open-bank deal activity and pricing has picked up in recent months, providing investment bankers reason to believe 2014 could be a stronger year for mergers and acquisitions.

An SNL Financial analysis found that the median price of open-bank deals announced between the start of this year and Feb. 21 was 133.3% of tangible book value.

That, of course, is modest when compared to the robust M&A era prior to the 2008 financial crisis, when pricing often doubled the level of today.

Favorable movement in price and volume

Investment bankers say a pricing gulf that helped to keep M&A in check for much of the past of couple years has begun to narrow, as buyers' currencies strengthened amid a strong run for bank stocks in 2013. That has given them the ability to pay up for appealing targets. Additionally, the quality of sellers' assets has improved, making them more attractive and more valuable.

Thomas Rudkin, an investment banker and principal at FIG Partners LLC, told SNL that he anticipates this will continue in 2014 alongside gradually improving economic conditions.

Volume, meanwhile, has ebbed and flowed. SNL found that between Jan. 1 and Feb. 21, 33 open-bank deals were announced. That was up from 28 during the same period a year earlier, a modest bump.

But when looking at the last few months—Nov. 1, 2013-Feb. 21—volume appears to be up more considerably. Over that stretch, 77 deals were announced, SNL data shows. That is up from 57 during the same period a year earlier.

"It is getting quite active out there," Rudkin said. 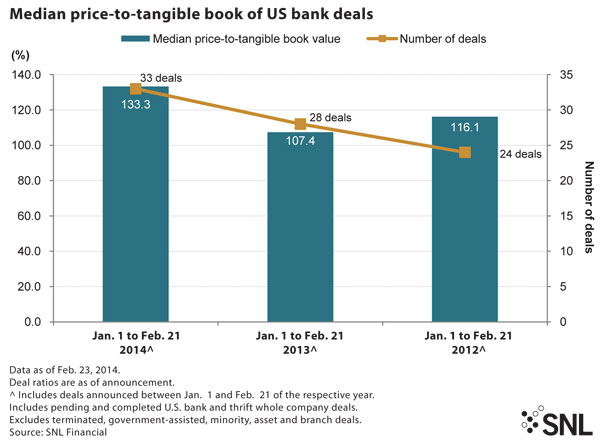 Price to be a bank keeps rising

Rudkin said that late in 2013, as banks were putting their final financial reports together for the year and also preparing 2014 budgets, increasingly more small lenders were accepting a reality that has been settling in around them for years: Heavy regulatory scrutiny and high examination demands are creating relatively large costs for small banks.

Reams of new regulations have come out under the Dodd-Frank financial reform legislation of 2010. Regulatory expense, coupled with the fact that dealing more with examiners distracts bankers from developing new business and competing with larger players, is leading more small banks—those with less than about $500 million in assets—to throw in the towel and consider selling, Rudkin said.

"The fixed costs to run these small banks now is preventing many of them from growing as fast as they used to, as fast as they really want to," he said. "As they realize they just aren't getting the strong return on equity they want, that investors want, more are at least looking at possibly selling."

Other community banks, he said, are looking to become buyers in order to gain the size needed to absorb regulatory costs and to expand lending limits to compete with bigger banks.

This is particularly the case in heavily populated areas where competition is abundant and fierce, Rudkin said.

"If you're in a more urban area, then I think the size you need for critical mass is going to be higher than if you're in a rural area where there's not as much competition," he said.

He pointed to the Chicago area, the third-largest market in the country and one that many have long viewed as overbanked and as a prime example of where further consolidation is likely.

A widespread tide will lift M&A

First Savings Financial Group Inc. President and CEO Larry Myers, for one, said his Clarksville, Ind.-based company is looking for deal opportunities. He said that for a long time the company did not embrace the idea that it had to get larger. Rather, First Savings executives thought it was more important to simply focus on being a profitable and well-run organization.

"But I can tell you that over the past few years, especially as Dodd-Frank has rolled down the pike, that mindset has shifted to say, 'You know what, we're going to have to be a billion dollars-plus to economically be able to support all of the regulatory demands,'" Myers said. "If we're able to find somebody else that maybe doesn't have the resources—they've got a good mortgage area or SBA-type lending operation, but they just don't have the assets to stand behind that activity—that's the kind of thing we'd really like to seek out."

Others are looking to capitalize on the inevitable disruption caused by consolidation. Count Laura Stewart, president and CEO of Seattle-based Sound Financial Bancorp Inc., among them. She told SNL that Sound Financial could take advantage of the fallout of other deals through branch acquisitions.

"We can acquire a branch at a fairly low deposit premium, have a head-start in a market and not have all of the costs and other issues [associated] with a whole-bank acquisition," she said.

More blocks the way than price

All of that noted, there are hurdles beyond pricing that could stand in the way of increased M&A this year.

Regulatory pressure, while a burden for small banks in general, is also an issue for dealmakers. As FinPro Capital Advisors Inc. President and CEO Donald Musso put it to SNL in a recent interview, regulators are scrutinizing potential deals far more now than they did before the financial crisis, delaying some deals and discouraging some would-be buyers from pulling up chairs to the M&A table in the first place.

What's more, Musso added, sluggish employment growth in December 2013 and in January 2014 punctuated renewed concerns about the health of the U.S. economy. He said a downturn is not out of the realm of possibility in 2014, and such a development could cut into the value of buyers' currencies and the quality of sellers' assets. That would curb M&A.

Rudkin concurred that a rise in M&A is hardly a sure thing this year. But he said that barring a substantial turn for the worse in overall conditions, there are enough drivers in place to support reasonable expectations for more deals this year.