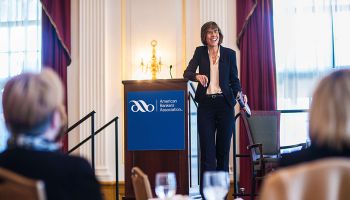 “Think of your career not as a ladder, but as a jungle gym.”

Patricia Sellers, senior editor at large at Fortune magazine, cited that as one of the best pieces of advice that she could give women who want to move up in banking, or other fields.

Focusing on moving up the corporate ladder can put blinders on a woman who wants to advance her career, Sellers suggested. Thinking of a career as an opportunity to build multiple kinds of experience and abilities develops a woman’s “peripheral vision,” Sellers advised. A sideways move may add to a personal portfolio of skills, which can help in moving up, in the long haul.

Sellers spoke of women’s challenges in business as keynoter at ABA’s 2014 Women’s Leadership Forum, held in conjunction with ABA’s Government Relations Summit. This year the Summit also featured an Emerging Leaders Forum for younger bankers identified as rising players in their states.

Sellers co-founded Fortune’s Most Powerful Women franchise in 1998. She has interviewed many women in top corporate roles, including Oprah Winfrey, Melinda Gates, Carly Fiorina, and Ginni Rometty. She shared insights based on her long career of speaking about power and position with these and other leading women leaders.

A maxim she shared came from Rometty, chairman, president, and CEO at IBM: “Growth and comfort do not co-exist.”

Those who would climb the monkey bars need to remember that.

A fundamental issue lies in the difference between how men and women leaders define the term “power,” according to Sellers. She said it was “startling” how differently the two genders see this trait.

Men tend to think of power in a “vertical” sense, in terms of climbing the ladder, reaching a higher position. Ultimately, Sellers said, men see power in terms of control. The journalist said she had asked many male leaders what power is, and typically they speak of “getting people to do what they otherwise wouldn’t do. It’s about control, it’s about dominance.”

Indeed, Sellers said that when the Most Powerful Women franchise began, she and others crafting it decided the project had to be centered on a formal ranking.

“That’s the only way to get guys to read it,” Sellers explained.

By contrast to the prevailing male view, women tend to think of power in a horizontal sense. The key concept women leaders home in on is “influence,” more subtle than dominance.

Why the difference? Sellers’ surmise is that this reflects our society’s culture.

“A lot of this goes back to us wanting to be good girls,” she said. Women tend to want to avoid being “too bossy, too assertive.” She noted that Sheryl Sandberg, author of Lean In: Women, Work, And The Will To Lead, and COO and board member at Facebook, hesitated to even put an appointment related to the Most Powerful Women ranking on her office calendar. As a top executive, her calendar was shared in her company, and she resisted the impression that those words that would create, out of context.

Power and how women get judged

The resistance to seeing power in terms like men do isn’t arrived at in isolation, according to Sellers. She said culture plays a strong role here.

“We are viewed within a narrow band of ‘acceptable’ behavior. It happens in all phases of government and business,” said Sellers. Women are judged more harshly than are men.

Sellers pointed to Sally Krawcheck—who gave the keynote speech at ABA’s 2013 women’s forum—as a prime example. Sellers said Krawcheck, who held senior posts at Bank of America and Citigroup, is very bold and aggressive. Sellers believes this was held against Krawcheck.

“It’s tougher for women out there, and the tougher the industry, the more vulnerable women are, and the harder they fall,” said Sellers.

This cultural influence can lead to women approaching career advancement very differently. Sellers cited Mary Barra, CEO of GM and a past interviewee, as an example.

She asked Barra if she had ever asked for a promotion or a raise. Barra said she hadn’t.

Surprised, Sellers asked if this reflected a personal career philosophy, and Barra said it did.

“Any job you are in, think about it as if you were going to do that job for the rest of your life,” she quoted Barra as saying. Sellers said that had seemed a trifle “naïve,” though Barra has had to work hard to deal with GM’s challenges, notably the recent recall controversy over faulty ignition switches.

“That’s a pretty pathetic number,” said Seller. She added that that tally has remained pretty flat for the last eight years or so.

Sellers believes that most boards and CEOs truly want to put more women into power.

“Nobody doesn’t want more women at the top,” she explained, but the cultural bias continues to hold women back. It’s simply harder for a woman candidate to make the cut as a result.

Glass, but not a ceiling

However, Sellers rejects the term “glass ceiling,” the oft-spoken-of barrier said to exist between women and top business posts. But she does believe that at times women risk being put on a “glass cliff.” This is a tendency for women to be promoted to top spots in times of crisis, when anyone would be challenged to overcome conditions or to turn around troubled companies or industries.

Sellers gave several high-profile examples of the latter part of the pattern.

One was Erin Callan, who was appointed CFO of Lehman Brothers shortly before the firm filed for bankruptcy. “I’m not sure that any male or female on earth could have helped that situation,” said Sellers.

Another executive Sellers saw as having been put on a glass cliff was Anne Mulcahy, former chairperson and CEO at Xerox Corp.

Sellers said Mulcahy had not been seeking such a job yet, and the Fortune profile was titled “The Accidental CEO.” Mulcahy had come up on the sales side of the company and didn’t feel well versed in leadership. So she went to Omaha to consult with Warren Buffet on how to be a CEO and get better acquainted with finances. Mulcahy, a Xerox lifer, became known as a tough reformer of a culture that had become bloated and inefficient.

Carly Fiorina hadn’t been that well known when she was plucked from obscurity and put in charge of Hewlett-Packard in 1999. Sellers said HP was looking for a woman to put in the top job, but the company selected someone they didn’t know well. The Fortune editor said Fiorina was aggressive, and in time was judged “in a narrow band” on that behavior, and fired.

“Some women succeed on the glass cliff,” said Sellers, “and some women fall.”

Where do women stand in business now?

During her Q&A period, Sellers revealed that she doubted that women would ever see 50-50 parity in the ranks of the major private companies.

“We stand a better chance of getting parity in government positions,” she said, in part because women make up a large portion of the electorate. Sellers pointed out that now 20 out of 100 U.S. Senators are women.

“That’s better than in Corporate America, and better than we are doing in corporate boardrooms,” she said.

Advice on moving up

In response to questions, Sellers had advice broad and specific:

• Broadening your experience. Sellers suggested that women in bank executive positions build out their skills by serving on the boards of other, nonfinancial companies. She acknowledged that many companies have rules barring officers from doing so, but she said pressing the point might reveal some give, some exceptions.

• Hitch yourself to growing organizations. Sellers cited a concept of Sheryl Sandberg, from Lean In, regarding moving from job to job when growth is occurring.

“Growth moves everyone up. If it’s growing, careers take care of themselves,” was advice Sandberg had from a mentor convinced her to accept her post at Facebook when it was a less-known quantity.

“If you lost your job tomorrow,” she posed, “would you still have power?”