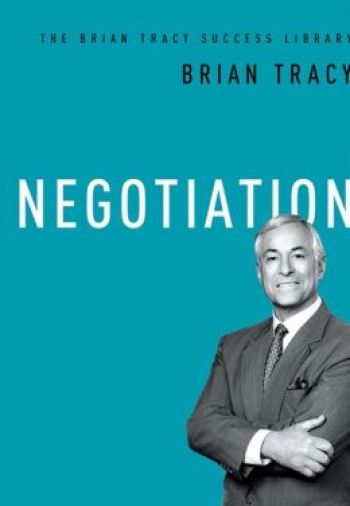 “Negotiating has been going on since the beginning of civilization because humans have always had an interest in improving their relative position in life.”—Brian Tracy

Every day we negotiate hundreds of things.

Some negotiations are personal and some are business. No matter what the type of negotiation, the better your bargaining skills, the better deal you will receive. If you don’t negotiate well, you will always be the victim of the other, better negotiator.

The good news is that negotiating can be learned. You can become a better negotiator with practice.

A key point to understand up front comes from author Brian Tracy:

“In every voluntary trade or transaction, the parties involved will only agree with the prices and terms if they both believe they will be better off afterward than if they had not entered into the negotiation or transaction at all.”

Price tags are just a beginning

Everything is negotiable. Sometimes a good negotiator is thought of as being pushy, but that person is simply trying to change the situation to his or her own advantage.

A really good negotiator finds a way to bring the situation to the advantage of both parties.

When merchants purchase goods they price the items to sell based upon an arbitrary guess as to the cost of the goods and the profit the consumer is willing to pay. If they guess wrong the items are placed on sale.

The author suggests you should never allow yourself to be intimidated by the fact an item has a predetermined priced marked on it or even when there is a written contract.

The key to getting a better deal is simply to ask.

If it is so simple, why don’t more people ask?

Tracy says this is the fear of rejection, whether this fear is conscious or unconscious. The only way to overcome this fear is to accept before you ever ask that you may in fact be told no … and you aren’t going to care.

Then you need to practice asking over and over for better deals. The fear of asking will soon diminish and then disappear altogether. Tracy calls this process “systematic desensitization.”

I remember when I first became a commercial loan officer and was assigned to go cold calling for customers. It took me 30 minutes to get the courage to get out of the car for my first cold call. After many years as a loan officer, I now enjoy making cold calls and learning about new businesses.

We all must remember: Rejection is not personal. On a few occasions I have been asked to leave a business before I ever was introduced to the principals just because they didn’t like sales calls.

“Don’t take rejection personally. When someone says ‘no’ to your request in a negotiation, it is not a reflection on you or your personal value. It is not a statement about whether you are a good or a bad person. As far as the person saying no is concerned, it is merely a commercial response to an offer of some kind. It  has nothing to do with you. Don’t take it personally.”

Two negotiating styles, each for a purpose

There are two types of negotiating: “Take no prisoners” and the “long-term negotiating.”

In the “take no prisoners” scenario, no matter how much the other person tells you they are your friend and they want to work to get you the best deal ever, you know they are only out for themselves. Several car purchases I’ve had in the past remind me of this type of negotiation.

The second type is the “long-term negotiation,” in which you work with the other party to establish a contract that is fair to both sides with the hope you will have a business relationship together for a very long time. I like to think this is the type of negotiation my bank’s officers have with customers, which can help establish long relationships beneficial to both parties.

One of the keys to establishing such lifetime business relationships is that both parties must be happy. This means both are so pleased with the results of the negotiation that they want the ensuing business arrangement to be successful.

As a result, they are more than willing to fulfill the promises they made in the negotiations so they can enjoy the benefits of the agreement.

Perceptions set the table for negotiation

When negotiating, power is all about perception.

It isn’t the actual power you have that counts, but the power that the person you are negotiating with perceives you have that matters.

One of the strongest powers you can possess is the “power of indifference.”

Sometimes this is referred to as a “poker face.” But it means staying inwardly calm in the negotiations. If you appear indifferent and the other person doesn’t, you are going to get a better deal.

The “power of knowledge and expertise” has a lot of leverage in negotiating. The example given in the book is the Apple Stores. Their sales people are so knowledgeable about their products that it drives their in-store sales. Most people who shop in Apple’s stores will buy products they didn’t know they needed or wanted before they went to the store.

The power of timing also means much. When negotiations take place can give you a position of power. The best time to purchase a car from a dealership, for example, is the last few days of the month when sales people are trying to meet their month-end sales quotas. You have more power in the negotiations to get a good deal than possibly the first few days of the month.

When you are negotiating beware if a salesperson tries to push you with a sense of urgency. I have witnessed many timeshares being sold due to the fact the price offered would “be gone” if the deal wasn’t done that day. My parents always said, “If it’s a good deal today, it will be a good deal tomorrow.”

Getting ready to negotiate

A vital key to the negotiation process is preparation, and Tracy devotes entire chapter to it.

A key step before negotiating is to come up with as many options as possible. This will give you freedom to make the best possible decision. As you gain more knowledge during the negotiation, continue to develop more options. This is a fluid process that is ever changing.

Another aspect of preparation is to learn everything you can about the party with whom you are negotiating. Get as many facts as you can before negotiations begin. And ask people you know who have past negotiation experience to share it. Knowledge places you in a position of power.

Working to control the “power of suggestion”

• The location in which the negotiations takes place can have a critical role.

In a serious negotiation, you don’t want the venue to be the other party’s offices or surroundings. This gives them an advantage.

• The personality you display during the negotiations can have an impact.

The more friendly and pleasant you are, the more likely you will be to get a better deal. This is in contrast to the reserved individual—or the abrasive one.

• Consider the table you negotiate over.

It is better to sit at a round table when in negotiations as opposed to sitting across from each other. Sitting across the table suggests an adversarial position.

• Ask what your body is communicating.

55% of your communication with the other person is contained in your body language. If you sit with your hands out, palms up, in a negotiation, you are conveying that what you are saying is reasonable, acceptable, and poses no threat to the other person. This is also the universal symbol of openness, honesty, and sincerity.

“In negotiating contracts, research has shown that reciprocity, the giving and receiving, is the most powerful way to gain agreement and commitment,” says Tracy. “When you do something for me, I feel obligated to reciprocate, to do something for you of equal or greater value.”

Simple things such as holding a chair or getting a cup of coffee for the other party can trigger this emotion.

You should always maintain a friendly posture when negotiating. But one of the most powerful ways to get what you want is to simply walk away. This will frequently get the other party back to the table conceding to your point.

I very much enjoyed reading this book. It won’t take long to read the 97 pages and it is packed full of helpful suggestions on negotiating. Such as this final tip concerning a situation every banker will face at some point: The stalemate.

How can you get negotiations moving again, when they appear to have come to a stalemate?

The best way is to put aside the one major issue causing the stalemate and continuing the negotiations over smaller issues. Then return to the major issue. With the other issues out of the way, it is possible it will make the major issue easier to negotiate.

More in this category: « A good beginner’s guide to retirement Geithner’s take on the crisis »
back to top