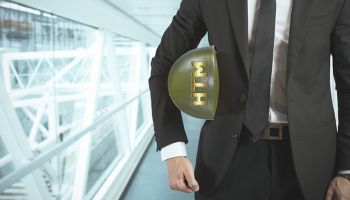 Banks have continued to seek safe haven from rising interest rates in their held-to-maturity portfolios, more than doubling those books over the last two years.

Institutions have placed large amounts of securities in held-to-maturity (HTM) portfolios to protect those assets from fluctuations in the market. They do so as they eye the prospect of rising rates. Unlike with bonds in available-for-sale (AFS) portfolios, banks are not required to make mark-to-market adjustments to their HTM buckets on a quarterly basis.

Those mark-to-market adjustments in AFS portfolios flow through accumulative other comprehensive income, or AOCI, and impact tangible common equity. Banks saw their tangible common equity come under pressure when long-term rates rose in the spring and early summer of 2013 because many bonds they own are rate-sensitive assets such as U.S. Treasuries.

Banks have sought to mitigate the impact that changes in market valuations have on their book values by relying more and more on their HTM portfolios. Banks increased their HTM portfolios to 18.98% of all securities at the end of the second quarter from 17.75% in the linked quarter and 11.82% a year earlier, according to SNL data. 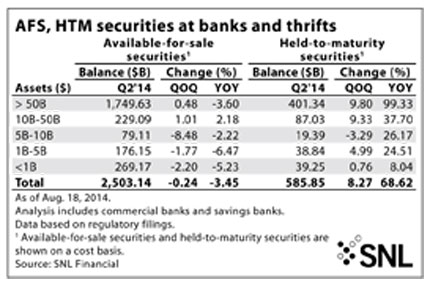 Advisers say banks often classify longer-duration securities such as municipal bonds as held-to-maturity—because longer-dated bonds could come under pressure when rates rise. Banks have also classified as HTM a number of liquid securities purchased to meet the requirements of new provisions such as the liquidity coverage ratio, since they have no intention of selling those assets, but they are likely to come under pressure when interest rates rise, advisers say.

Indeed, SNL data show that banks reported a 60.66% sequential increase in the amount of U.S. Treasury securities held in HTM portfolios in the second quarter, while disclosing 15.53% sequential growth in munis in their HTM books in the period.

Larger banks that have to comply with the liquidity coverage ratio and the net stable funding ratio have led the way in building HTM portfolios. Not only are large banks trying to protect those bonds from swings in the market, but under the Basel III rules, changes in the value of AFS portfolios would also flow through regulatory capital at institutions with more than $250 billion in assets. 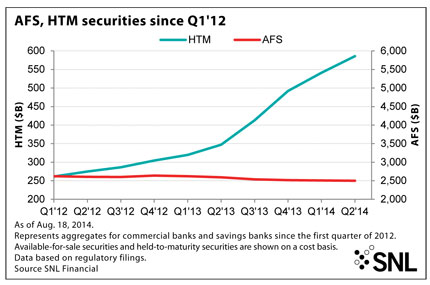 Banks with more than $250 billion in assets—JPMorgan Chase & Co., Bank of America Corp., Citigroup Inc., Wells Fargo & Co., Goldman Sachs Group Inc., Morgan Stanley, U.S. Bancorp, PNC Financial Services Group Inc., Capital One Financial Corp. and HSBC North America Holdings Inc.—increased their HTM portfolios in the second quarter by an average of 24.89% from the prior quarter and 33.57% from a year earlier, according to SNL data.

Looking at the industry by category, banks with more than $50 billion in assets—which are subject to the liquidity coverage ratio—have built their HTM portfolios considerably. Banks in that group increased their HTM portfolios at the end of the second quarter by 9.80% from the linked quarter and nearly 100% from year-ago levels, SNL data show.

Somewhat smaller banks have relied on their HTM portfolios more recently as well, but the increases have not been as pronounced as at their larger counterparts. Banks with assets between $10 billion and $50 billion increased their HTM portfolio by 9.33% from the first quarter and 37.70% from a year earlier. 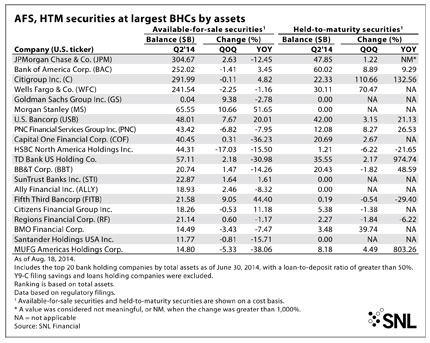 While many banks have used their HTM portfolios to prepare for rising rates, some market watchers believe rates could possibly move even lower in the near term. Guggenheim Partners Chief Investment Officer Scott Minerd argued in an Aug. 20 article that U.S. interest rates could head significantly lower.

"Add to that the perception that both the yen and euro are a one-way bet toward depreciation and it is reasonable to expect that international capital will continue flowing toward the U.S., pressuring Treasury yields down as quantitative easing draws to an end," he wrote.

Minerd further noted that a flight to quality and demand for U.S. Treasuries has come out of global tensions including Ukraine and Iraq, which should help keep long-term rates low.

"It is premature to sell now, but as 10-year U.S. Treasury yields approach 2 percent it should provide an opportunity for rebalancing portfolios. In other words, don't chase the rally, but don't fight it either. The opportunity to sell bonds is coming—but not just yet," Minerd wrote.