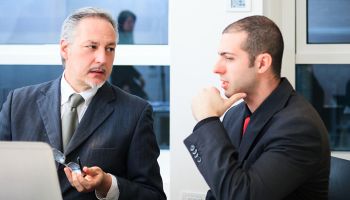 While CEO age has always been one of the elements involved in bank M&A deals, it may be an even bigger factor today in determining which banks are likely sellers.

The potential sellers list compiled by Keefe Bruyette & Woods is often marked by CEOs that "tend to be pretty old," he said. The average CEO age in selling banks recently was about 65. "And I think once you start getting to 66, 67, 70 and onward it really starts to become a much bigger factor and people look for them to sell," said Patel.

The average age of a selling CEO in the nine largest deals from early 2012 to early 2013 was 64—compared to 58 for the average small and mid-cap CEO, according to analysis conducted by Keefe Bruyette & Woods in 2013. Patel said the analysis has not been updated recently, but he believes 2014 deals would support the findings. 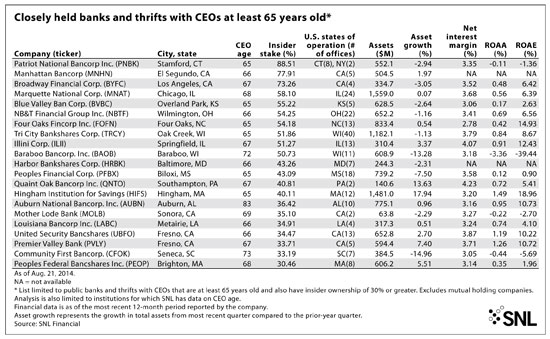 What’s going on out there

At least two recently announced deals involved sellers with CEOs that were 65 or older and where insider ownership was at least 30%.

Lafayette, Ind.-based LSB Financial Corp., with insider ownership at 28.11%, is led by 65-year-old President and CEO Randolph Williams. The company announced June 4 that it would be acquired by Old National Bancorp.

Flynt Gallagher, president of Meyer-Chatfield Compensation Advisors, told SNL he agrees that there could be occasions when CEO age does affect a bank's decision to sell. This is especially true as baby boom generation executives retire and board fatigue sets in to some degree.

Gallagher said situations in which a bank has not prepared for the succession of executives, directors and even shareholders exacerbates the problem.

"Additionally, the realization that any potential merger will not provide 5 times book—as many banks identified in their business plans in the event of a sale—coupled with the increased cost of regulatory compliance, contributes to the easy solution to sell and take their toys and go home," Gallagher said. [See Jeff Gerrish’s new blog about community bank deal pricing, “What’s a good price?”] LINK: to come, you have the blog

Generationally finding a reason to sell or hold

Fairmont, W.Va.-based MVB Financial Corp. President and CEO Larry Mazza said the older average age of the leadership teams in markets such as western Pennsylvania compared to some areas where leaders tend to be younger, including Baltimore/Washington, D.C., is a definite factor in M&A.

Mazza cited a recent study that suggested 50-year-old CEOs merge because they want to be part of the larger bank's leadership team, 60-year-olds sell so they can cash out and retire, while those in their 70s and older tend to stand pat.

KBW’s Patel said CEO age in selling banks is typically one of the heavier factors in a bank's decision to seek a partner. And it tends to be smaller banks of less than $2 billion or $3 billion in assets where the age factor comes into play simply because of the way those companies are structured. Larger banks usually have succession plans in place, and so the idea of the CEO selling out is far less of a possibility, he said.

"With the smaller banks, sometimes they're family-run and maybe they don't have their kids working there," he said. "And if the leadership is older it makes more sense, especially if there is no succession plan in place."

Terry Stroud, a former OCC and OTS regulator and now CEO of Dallas-based consulting firm Opportunity Group, told SNL the departure of the older generation of bankers is leading to a change in personality among bank leadership teams across the sector.

People who used to want to be bankers did not have many of the same basic personality traits as those entering the business today, he said. Risk quantification and minimization is the No. 1 concern of young bankers today, compared to the prior generation that worried first about how to help communities and businesses grow.

"My generation thought about making or creating something," he said. "That is not the mentality of today's younger banker."