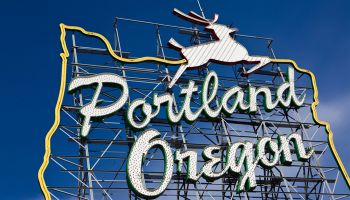 From Ronald Farnsworth's view in the finance chief's seat at Umpqua Holdings Corp., the company's home base of Portland, Ore., provides the steady and abiding expansion that banks operating for the long haul relish.

But the latter provides reliable growth and, because it is not surging, is less likely to overheat and eventually find itself at the unenviable end of the kind of boom-and-bust cycle that rocked West Coast markets in previous eras.

The middle ground of sorts in which bankers say Portland now rests makes it appealing to lenders eager to grow but at a dependable, relatively low-risk pace.

"Portland is strong," Farnsworth told SNL. "It's just that it has been more stable and steady growth" than what banks are seeing in Greater Seattle and in the San Francisco Bay Area. "Nice incremental, moderate growth is good. … It eliminates the potential for big swings."

His company operates in both Seattle and Greater Portland, and he said at a Raymond James conference earlier this month that the latter clearly trails the former in terms of current activity. But, he added, Seattle is "so hot it makes me nervous." 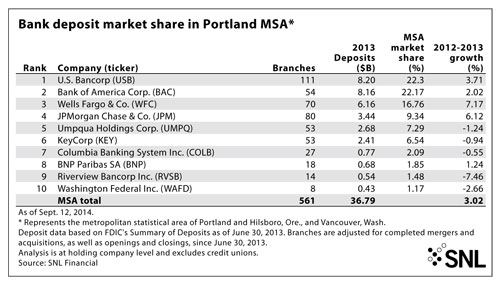 Unemployment in the Portland metropolitan area has in recent months hovered near 6%, while the jobless rate is below 5% in the Seattle and San Francisco areas.

Bankers and analysts say Seattle has been bolstered in particular by the major expansion efforts of Amazon.com Inc. It is hiring, building, and driving broader economic activity as other businesses feed off its growth and home builders and others benefit from increases in young professionals moving to the market for jobs.

Amazon is a "major driver" of growth for Seattle that Portland cannot boast. "They are building everywhere in Seattle and hiring a lot," James Bradshaw, an analyst at Bridge City Capital LLC in Portland, told SNL.

Farther down the coast, San Francisco is in the midst of a far-reaching burst in tech industry activity, one that has driven both job growth and increases in property value as well as heightening interest from venture capitalists who have poured money into start-up companies in the Bay Area, analysts say.

Portland "doesn't have that all-out economic firepower that Seattle or San Francisco has," Bradshaw said. "But it's still a very good market."

Bradshaw noted that both Intel Corp. and Nike Inc. operate in the Portland area and are growing. So is the Oregon Health & Science University, he said, adding to the market's research and development base and positioning itself as a long-term driver of innovation and jobs. 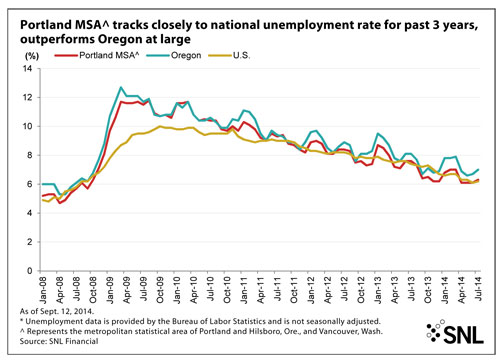 Small businesses and start-ups also are progressing nicely, Bradshaw said, and could over time blossom. "I see them, as a group, as good economic engines for the long haul," he said.

And that is good news for community banks, which often specialize in working with small businesses as they launch and later invest in expansion. "It's a really healthy market for community banks because it is small-business oriented," Bradshaw said.

Equally important for banks, he added, is that Portland in 2014 is marked by "good loan growth and great credit quality."

SNL data shows that year-over-year median loan growth among banks based in Portland topped 5% in the second quarter. Umpqua, the largest bank based in Portland with more than $22 billion in assets, technically saw its second-quarter loans surge more than 100% from a year earlier and nearly 100% from the previous quarter. But much of that was the result of its acquisition of Sterling Financial Corp. in April, a deal that nearly doubled Umpqua's size.

But, excluding those acquired from Sterling or subsequently divested, the bank's non-covered loan portfolio grew by $294 million during the second quarter, or 8% annualized. That represents the kind of steady-eddy growth that Farnsworth likes.

Inside the head of Portlanders

Sentiment among residents of Portland, too, is generally positive, a new poll shows.

The results of a survey commissioned by the Portland Business Alliance and Portland General Electric, released this month, show that notably fewer residents of Greater Portland think they are worse off now than in 2011, the last time the poll was conducted. In 2011, 45% said their households were not doing as well, economically, as two years earlier. This year, that figure dropped to 25%.

To be sure, economic health remains a concern for many in Portland, as it does across the country. The poll of 600 residents, conducted by DHM Research, found that 35% rate the economy as a chief concern. But, that figure declined notably from 2011, when it was 54%. Three years ago, 38% rated employment opportunities as a top concern; this year, that figure dipped to 19%.

The favorable conditions are expected to contribute to population growth over the next five years. Nielsen projections suggest the Portland metro will grow from a little more than 2.3 million residents in 2014 to well over 2.4 million by 2019. Household incomes, too, are projected to climb in that period, from a median of about $55,000 to $56,000.

If the projections prove accurate, they would mark gradual increases, but the prevailing sense is that those in the market can bank on them. "Portland is a good place to be," Bradshaw said.