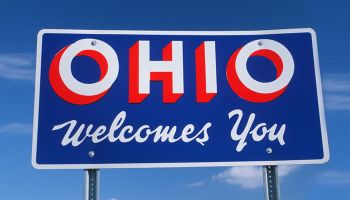 Powered in part by an auto manufacturing rebound, Ohio's economy has climbed back from the doldrums of the last recession. But the state is not poised for significant population growth or a surge in wealth, leaving banks to either push for expansion elsewhere or to work hard for greater market share in the state—often via mergers and acquisitions.

Marietta, Ohio-based Peoples Bancorp Inc. is a case in point. In 2014 alone, it has announced four open-bank deals in Ohio, with targets ranging in size from about $91 million in assets to more than $650 million. Peoples, with $2.16 billion in assets, has closed two of the deals and has two slated for completion in coming months.

"It's been quite a year for our company," Edward Sloane, Jr., treasurer and CFO, said in an interview. He said the company's deal plate is full for the remainder of 2014, but Peoples could pounce again next year.

"We'll continue to be an active acquirer," said Sloane. "I think you'll see a continuation of what you've been seeing from us"—smaller, relatively low-risk acquisitions that help the company deepen its presence in Ohio and expand into new markets in the state. The bank also will keep an eye on possible larger deals in case an ideal target emerges. 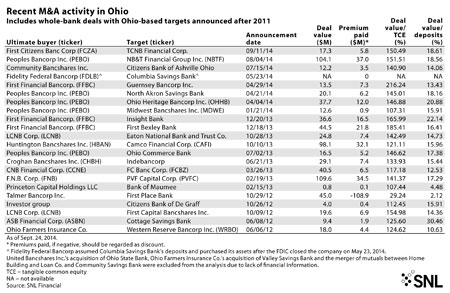 Sloane said that smaller community banks in the state—often those well under $1 billion in assets—are increasingly struggling with heavy compliance burdens, stiff competition, and low interest rates that have crimped lending profitability.

Against that backdrop, he said, more of these banks are looking to sell to larger companies. And larger community banks such as Peoples, he said, are eager to buy because loan demand remains generally modest in an era defined by economic growth that falls short of robust in many markets in Ohio.

"I think [deal] opportunities are growing," Sloane said. "Small banks in particular are having difficulty in the environment we're in. … I think you'll see more consolidation in Ohio as a result of that." An acquisition, he added, "is a way that banks, in this environment, can continue to strengthen earnings."

Robert Palmer, president and CEO of the Community Bankers Association of Ohio, agreed with that assessment. He told SNL that many smaller banks in the state report to him that the combination of heavy regulatory burden and only modest loan demand is forcing them to re-evaluate their strategies. This often involves considering the possibility of a sale, he said, noting a spate of bank deals over the past couple of years in Ohio.

For some small banks, he said, the current environment is "becoming more unfeasible." He said the association expects more consolidation, with small community banks making up the bulk of sellers. Larger community banks that are looking to gain more size, he said, are likely to account for the majority of buyers. "We think that trend will continue at least for the near term," he said.

Facts and trends about Ohio economy and institutions

Ohio posted a 5.7% unemployment rate in August, according to the state's Department of Job and Family Services. That was better than the national level that month, 6.1%, and was well below the 7.5% rate Ohio reported in August 2013.

The state's manufacturing sector has broadly benefited from a positive run in auto sales over the past couple years. The car and truck industry sold 1.25 million vehicles in September, a 9.4% jump from a year earlier, according to Autodata Corp.

And certain markets are humming along nicely, bankers and economists say.  Peoples’ Sloane said the Dayton and Cincinnati areas are faring well and the Columbus market—which is relatively diverse with its ability to draw upon health care, state government and higher education, among others—is "strong." Oil and gas drilling in eastern Ohio's Utica Shale also is creating opportunities in that region, he said. 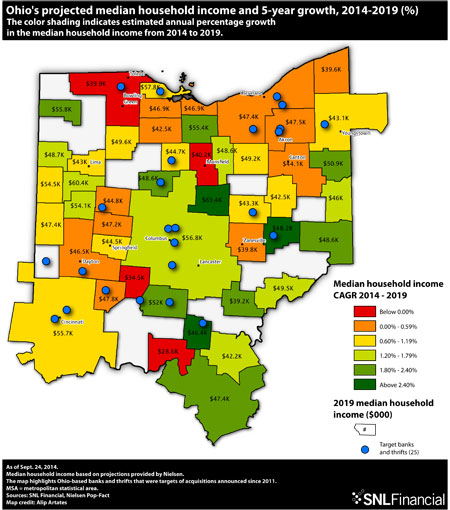 Kevin Jacques, an economist and chairman of finance at Baldwin Wallace University in Berea, Ohio, told SNL that downtown Cleveland also is bustling with construction, as a revitalization there has led to new hotels, office buildings and some retail. But overall the Cleveland metro area is advancing modestly at best.

And Ohio on the whole, Jacques said, has proven a slow-growth state in recent years and looks to continue to do so.

"It's a positive story here, but you're not seeing really strong activity statewide," he said.

Housing markets are generally decent, Jacques said, but far from vigorous. The latest S&P/Case-Shiller national home price index, for example, showed a year-over-year price increase of 5.6% in July. But prices in Cleveland, the Ohio market represented in the index, were up just 0.9%

Manufacturing, a pillar for Ohio, has healed nicely but jobs in that sector are not as bountiful as they were in past eras and are unlikely to ever be again, as advances in technology and outsourcing of work to other, less expensive countries created a secular shift toward a smaller U.S. manufacturing base.

On a relative basis, Jacques said, the state also is not likely to attract new businesses and residents at the pace that states in regions such as the Southeast and Southwest are bound to because of the favorable climates found in those areas. Warm weather has for years attracted both retirees and young professionals to states like Florida, he noted.

Between 2014 and 2019, Ohio's population is projected to grow only 0.02%, according to an SNL analysis of Nielsen data. Median household income is forecast to rise just 3.57% in that time. 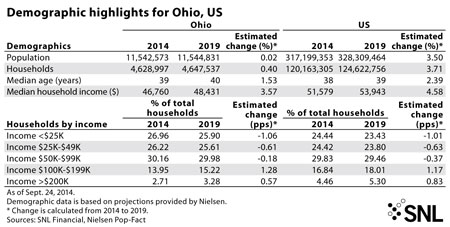 "Demographically," Jacques said, "the trends in Ohio are not terribly strong. … Economically, things are clearly better, but overall it is not robust here, and people should not expect robust gains here for the banking industry."

That does not mean individual banks will not shine, he said, but they will have to steal share from others, buy out competitors or expand in other territories. "If you're a bank headquartered in Ohio, there is good reason to be geographically diversified," he said.

Indeed, regional stalwarts based in Ohio have actively pushed for growth outside of Ohio in recent years. Cleveland-based KeyCorp, for one, is active on both the East Coast and the West Coast, and Cincinnati-based Fifth Third Bancorp has expanded in the Southeast. Akron, Ohio-based FirstMerit Corp., for another, entered the Chicago market in 2010 and has grown substantially there since.

Smaller banks content to focus on Ohio and neighboring states, meanwhile, are active on both the M&A and market-share stealing fronts. Buyers have announced 22 whole-bank deals involving Ohio targets since the start of 2012, according to SNL data.

In addition to accounting for nearly a fourth of that activity—prior to this year, it announced a deal in 2013—Peoples also is aggressively working to gain share by luring customers away from competitors, including larger banks,  Sloane, the finance chief, told SNL.

He said the company is winning new business in rural areas and in suburban markets around cities such as Columbus by matching bigger players on technology and diversity of product offerings—Peoples provides insurance and investing services, for example—and by working hard to win on service. In a highly competitive market, he said, banks "have to be aggressive." 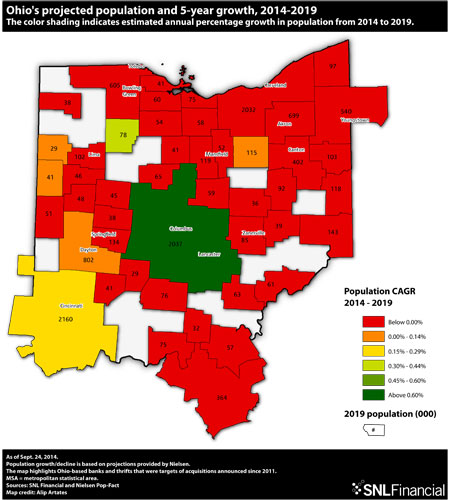