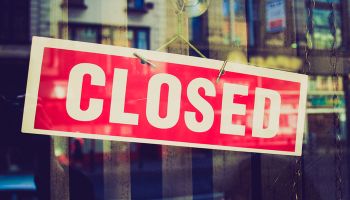 Banking companies continued to grow U.S. deposits during the 12 months ended June 30, even as they collectively closed hundreds of branches amid efforts to shave costs and invest more resources in the online delivery channels that customers increasingly prefer.

Examining the trend through a Florida lens

Nichols said banks of all sizes, including Florida-based CenterState, see less and less foot traffic in typical branches each year as customers do more of their business online and via mobile devices.

"They don't go into branches like they used to," he said.

This has motivated banks to take a hard look at each branch they operate and close those that are simply not generating substantial business. The latest dip in branch totals tallied by the FDIC marks the largest year-over-year decline since 1994, which is as far back as the agency publishes data electronically.

The money saved often gets reinvested in new technology aimed at meeting customers' evolving preferences. Banks are also consolidating branches after they make acquisitions, often closing overlapping locations. CenterState, for one, is in the process of closing four branches after cinching a pair of open-bank deals this year, Nichols said.

But even as this trend has developed over the last five years—branch counts have declined each year since 2009—U.S. banks have steadily built up deposits. Since the 2008 financial crisis, this has been due in large part to the fact that consumers and business owners have often preferred to park their cash in banks rather than spend or invest it due to economic uncertainty and a generally hazy financial outlook. 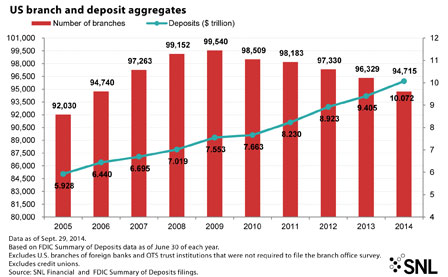 Nichols said Americans remain generally conservative. That, coupled with the fact that customers rarely go through the hassle of changing banks unless they stand to get paid significantly more in interest on their deposits, continues to help banks collect more deposits and hold on to them, he said. He says this applies even when those deposits are kept at branches that are closed later on.

Short-term interest rates have hovered at or near historic lows for several years. Most customers would rather see their deposits move to a nearby branch of their existing bank than uproot and change banks altogether in a low-rate environment, he said.

What's more, Nichols said, banks are increasingly and effectively reaching customers via online channels, allowing them to attract deposits from those who may not be near branches.

CenterState, for example, projects that it will hold onto 94% of the core deposits currently held at the four branches it is planning to close.

"With each branch closure, deposits are proving even stickier than we thought," Nichols said. "It takes a lot of energy to move an account."

All four of the nation's largest banks—JPMorgan Chase & Co., Bank of America Corp., Citigroup Inc. and Wells Fargo & Co.—grew deposits between mid-2013 and June 30 of this year, the FDIC's data release shows, even as JPMorgan, BofA, and Citi all shrank their branch networks. 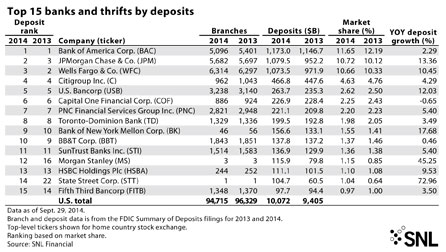 Of the top 15 banks in the U.S. by deposits, 14 grew deposits during the 12 months ended June 30, according to the FDIC's Summary of Deposits. Capital One Financial Corp. was the lone exception, according to an SNL analysis of the data.

But will deposit trends shift?

Brett Rabatin, an analyst at Sterne Agee & Leach Inc., told SNL that he, too, anticipates banks will continue to downsize their branch networks for the same reasons cited by Nichols. Deposit levels should also remain strong, Rabatin added, though he said that as the specter of a rising rate environment looms—the Federal Reserve has suggested that it could raise short rates in 2015—total deposit levels could taper off and eventually decline some in coming years.

That is because as rates rise, at least some savers will begin to shop around and move their money if they can earn notably more interest by making a switch. Furthermore, a rising rate environment is typically accompanied by more robust economic activity. If that proves to be the case again, Rabatin said more consumers and business owners will pull some of their money out of banks and start to invest it elsewhere.

"Personally, I think we could see deposits decline some as rates go higher," Rabatin said. "So that part of the trend could come to an end."