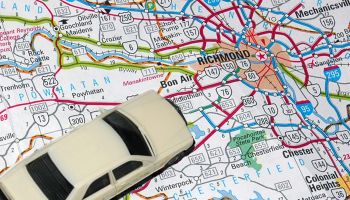 In a slow growth environment, Richmond, Va., is proving that being stable is enough to attract many new banking entrants.

Banks have poached lending and wealth management teams, opened new offices, and looked to acquire banks in the Richmond MSA. Banks eyeing expansion in metro Richmond have been attracted to the stability of Virginia's state capital, its favorable market demographics, and the opportunity to take market share from the four largest banks in the area. Those leaders hold close to 78% of the market's deposits, according to SNL data.

The Richmond MSA never experienced the same level of development as many other areas in the Southeast and did not suffer as severe a downturn when the housing bubble burst. The area is home to a handful of Fortune 500 companies and a number of universities, including the largest medical school in the state, Virginia Commonwealth University's School of Medicine. Stone Brewing also just announced a $74 million development project for an East Coast facility in metro Richmond that will include a production brewery, packaging hall, destination restaurant, retail store, and administrative offices.

Bankers in metro Richmond point to the local economy's stability and say it lacks the same peaks and valleys of many other areas. T. Gaylon Layfield III, president and CEO of Richmond-based Xenith Bankshares Inc., said that growth in Richmond usually is modulated during really good times but also tends to have a floor under it when times get tough. The appeal of Richmond has attracted banks to the market that may not see the same level of potential loan growth in their home markets.

"I don't really quite understand why there seems to be the interest on the part of so many institutions in trying to come to this market. In some ways, it is perhaps a reflection on lack of opportunity in other places," Layfield told SNL.

Matthew Steilberg, head of retail banking at C&F Financial Corp. unit Citizens and Farmers Bank, agreed that many new competitors in the Richmond MSA are coming from markets with little to no growth opportunities.

"A lot of these banks that had made their bread and butter in rural markets are forced to come to the metro markets to find loan growth," Steilberg told SNL.

Steilberg's company announced plans to expand significantly in the Richmond market close to a year ago, purchasing Powhatan, Va.-based Central Virginia Bankshares in October 2013. The deal helped significantly grow C&F's deposit base in the metro Richmond market, and the company has managed to hold onto its market share.

How banks have entered Richmond

A number of other banks have expanded in Richmond this year. Park Sterling Corp. entered the market early in 2014 and hired a commercial banking team and two former StellarOne executives to head up its wealth management and mortgage banking operations. The hires came around the same time that StellarOne merged with Richmond-based Union Bankshares Corp.

Park Sterling plans to open a second branch in the Richmond market and said on its third-quarter earnings call Oct. 30 that Richmond has "taken off," hitting a "great stride" in the first year of the new expansion.

Bank of Lancaster noted that many of its customers have second homes in the Virginia Northern Neck but have primary residences in the Richmond area and the expansion will allow it to better serve those customers. 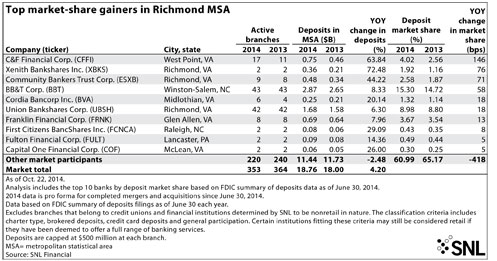 Midlothian, Va.-based Cordia Bancorp Inc. set the stage to grow in the area shortly thereafter. The company raised capital in April and planned to use the funds to support loan growth as well as the opening of two branches in metro Richmond in August.

A few weeks earlier, the market produced an even bigger shakeup, with TowneBank agreeing to acquire Glen Allen, Va.-based Franklin Financial Corp. in mid-July for $278.4 million. The deal offered eight branches in the market. In the aftermath of the deal, TowneBank Chairman and CEO G. Robert Aston Jr. said many would-be buyers are simply looking for sellers in potentially higher growth markets.

With new entrants coming into Richmond regularly, the consistently competitive market has become "even more competitive," according to Xenith's Layfield.

Other bankers tell a similar story and say that competition has not only pressured loan pricing, but also the structure of many credits.

G. William Beale, president and CEO of Richmond-based Union Bankshares, said on his company's third-quarter earnings call that it is seeing credits move to other banks offering loans with looser covenants. He said there are still too many banks and nonbanks chasing a limited supply of loans, increasing competition in the marketplace. The dynamic has caused people to lose their discipline when making many loans, he said.

D. Anthony Peay, chief banking officer at Union Bankshares, added that some competitors are being a "little more aggressive" than they should be and noted that some community banks are doing nonrecourse lending.

Bankers in Richmond also said that they have seen some banks offer loans with fixed rates to win new business, but said the practice was not yet the norm. Bankers cautioned against using the practice regularly since it could bring interest rate risk and term credit risk. 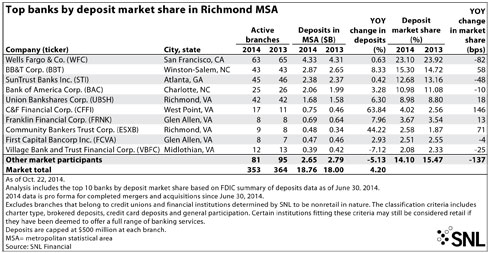 Bankers said they see some form of competition across various lending segments. Seaman said that the bank sees plenty of competition for apartment loans and financing in the medical office space. He said the retail lending category is not as intense, though, noting that there is a lot of supply on the market.

The executive further said that the bank has been able to do all the acquisition and development lending and business line of credit lending it really wants since many banks turned their focus away from A&D lending in the wake of the credit crisis. Many developers and lenders are coming back to that market now, though, he said, causing a relaxation of pricing and underwriting standards.

Despite the competition, banks have found ways to grow market share. Community Bankers Trust Corp., for instance, had grown its deposit market share by 40 basis points from year-ago levels. Community Bankers President and CEO Rex Smith III said the company has added quality people in its branches and to its small business lending team. He said that the small business lending arena has not been as competitive as some other business lines and noted that his company can effectively compete with larger institutions in that arena.

"Our whole game plan is to be the bank with answers, to be the bank that the customer gets satisfaction from beyond the larger institutions and I think that's where we've gotten most of our market share," Smith told SNL. "They're obviously very convenient and have a lot of locations, but we've heard over and over that they can't keep the same people in the same locations. You can't find a banker that is your banker."

Xenith Bank has managed to grow its deposit market share even more and increase its deposit base in metro Richmond by more than 70% in the process. Xenith's Layfield said that his company is primarily focused on the middle market commercial space and works to take away market share from the biggest banks. He said the company has built a team with deep experience in its market and focuses on executing and making decisions in an "effective and timely way."

C&F has managed to grow market share in Richmond the most, heavily supported by its acquisition of Central Virginia. C&F's Steilberg noted that he has also attracted 15 to 20 retail bankers from his previous employer, Bank of America Corp., to join C&F Bank to help grow market share in the area.

He said the company's branch managers and relationship bankers receive day one training on business and e-commerce products and certain "soft skills" that teach them how to better help their customers.  He also said the company works to integrate itself into the local community, hosting monthly networking events that feature speakers that can help educate customers on issues even outside of banking.

"This is not a real complicated business. You just have to get out and wear holes in the bottom of your shoes," Steilberg said.