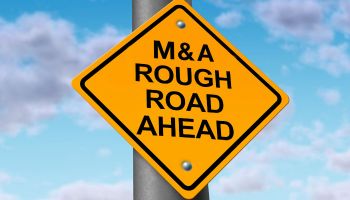 Some of the largest banking deals of the year have been struck recently, but attendees at the Sandler O'Neill & Partners 2014 East Coast Financial Services Conference in Florida on Nov. 13 were hesitant to predict that those transactions would be a precursor for a huge pickup in M&A.

The sector has seen some of 2014's biggest deals within the past couple of weeks including Winston-Salem, N.C.-based BB&T Corp. agreeing to acquire Lititz, Pa.-based Susquehanna Bancshares Inc. in a 30% cash-and-70% stock transaction for total consideration valued at about $2.5 billion, and Walla Walla, Wash.-based Banner Corp. announcing plans to acquire Spokane, Wash.-based AmericanWest Bank for a value of approximately $702 million.

"The banks with some strength in their currency obviously felt better about the bid/ask spread on potential deals, and the lower-premium guys still felt like sellers wanted too much," Scouten said. "In almost all cases it sounded like there are more potential sellers though—more banks that have realized they will not be able to earn their costs of capital and boards that are finally coming around to this truth."

T. Gaylon Layfield III, president and CEO of Richmond, Va.-based Xenith Bankshares Inc., told SNL that he does not believe the streak of larger deals signals any significant change other than perhaps the passage of time has brought more realization on the part of some banks that the path ahead as an independent entity is not as attractive as banks would like.

Some organizations that have seen some challenges during the past few years got the worst behind them and started looking down the road only to find a difficult environment for banks, said Layfield.

Layfield said Xenith does not rely heavily on incoming M&A inquiries, and the bank has not seen any pickup from that standpoint recently. He said the bank has interest in increasing its presence in all of its markets from Hampton Roads through Richmond and into northern Virginia.

M&A expansion in some of those markets is more realistic than others for Xenith, given the bank's stock price and the multiples that are being seen in some areas, such as the Washington, D.C., market. "It's pretty robust, and as a result from a financial standpoint makes it relatively more difficult maybe to do a transaction," he said. But Layfield said the bank still has interest in the market if the right deal can be found.

Xenith's most recent whole-bank acquisition was for Gloucester, Va.-based Colonial Virginia Bank, which closed June 30. [See also the SNL Report “Why is Richmond so hot?”]

Sandler's Scouten said that because of the potential tax consequences involved, he still expects to see mostly stock deals done—perhaps at more rational prices where the seller realizes it can benefit from the potential run-up on the acquirer's stock as well.

"Overall, M&A should continue to pick up in 2015, if economic conditions remain steady, and you could see some more fee-based M&A transactions as well, as banks look to diversify, especially with rate looking to stay lower for longer," he said.

Todd Clossin, president and CEO of WesBanco Inc., told SNL that interest rates have stayed low for a long period of time, which impacts net interest margins. At the same time, the refinance market is down significantly from where it stood just a couple of years ago. Community banks are now looking at those factors and others, and wondering how they will be able to grow earnings, he said. They are also burdened by having to spend their profits to hire compliance and risk management personnel. "That's causing a lot of them to sit back and say, 'We're not sure we're going to be making more money three years from now than today' and therefore they are partnering up with other banks," he said.

Clossin said banks below $3 billion in assets will have a tougher time going forward alone because of those increased costs, while banks above $20 billion are seeing trading revenues going away due to the Volcker rule.

Also, capital requirements are making it harder for those large banks to get a return for their shareholders. He said WesBanco sits in the "sweet spot" in terms of size. (WesBanco had $6.28 billion in assets as of Sept. 30.) "We're big enough to play, but yet we're small enough that we can do acquisitions, he said.