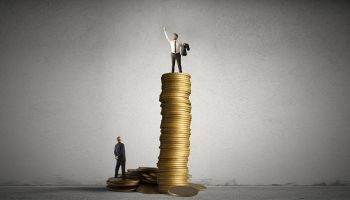 Contrary to the trend of recent years, community banking actually got a little bit easier in one respect on Dec. 19, 2014. Let’s address this major positive shift for small bank holding companies.

In 1980, the Federal Reserve adopted the Small Bank Holding Company Policy Statement. At its inception, the Policy Statement applied to “any consolidated bank holding company under $150 million in total assets.”

Recently, in conjunction with a law passed by Congress and signed by the President, the Small Bank Holding Company Policy Statement’s consolidated asset threshold has now increased to $1 billion. [Read more about it in “Congress delivers M&A capital gift before Christmas.”]

“So what?” you may ask. Since you asked, let me give you the practical side of the “so what?”

For starters, one benefit of a bank holding company structure for community banks is the ability to leverage capital into the bank.

This is a fancy way of saying that the holding company can borrow money (pretty much from any source) and contribute it to the bank as capital. Thanks to the revised policy statement, now the capital adequacy test for a banking organization with less than $1 billion in consolidated assets occurs at the bank level only.

What can you do with this?

If your community bank holding company is less than $1 billion in consolidated assets and the board of directors desires to increase the bank’s capital for whatever reason, my recommendation is that the board first consider debt capital. (If your banking organization is greater than $1 billion in consolidated assets, I still suggest the board look first to debt capital. A larger organization can still leverage the bank holding company, just not as much.)

Debt capital can be as simple as an unsecured note from a rich and smart director who may be sitting on cash from the sale of a business or otherwise and who would like to get an increase in rate over what the bank may be paying on deposits. (That would not be too tough considering the current environment.)

Another option would be a traditional bank stock loan where an institutional or correspondent lender loans money to the bank holding company, with the bank’s stock serving as collateral for the loan. The cash generated from that loan then gets pushed down into the bank.

Another source of cash would be a line of credit from an institutional lender, which could be another community bank, correspondent, or otherwise.

In none of these three examples does the instrument at the holding company level qualify as capital. Thanks to the policy statement, it does not need to.

The bottom line on the issue is this: When the investment banker knocks on your door and suggests that you sell subordinated debt at the holding company, tell him to forget about it.

Why would you even consider it? So the investment banker can get his fee? That is the only good reason I can think of.

What I’ve heard from banks

As an example of this, I have talked to a number of banks lately that participated in the Small Business Lending Fund program from the Great Recession.

As many of you may recall, under that program, the government would purchase preferred stock from a community bank holding company at a 5% dividend rate initially. Under most circumstances, if your community bank increased its small business lending over the bank’s baseline, the rate on the preferred stock would decrease incrementally down to 1%.

The only catch is that that rate bumps up to 9% after five years. Several of the banks I have recently talked to have been besieged by investment bankers offering to help them do a subordinated debt offering to pay off the SBLF money.

Why? Again, the only reason I can think of is the investment banker gets a fee.

For any community bank under $1 billion in consolidated assets that wants to eliminate SBLF or requires capital for any other reason, straight debt at the holding company makes the most sense.

The fundamental question in all of this is “How do we generate cash at the holding company level?”  There are means of generating cash other than debt, but the reality is they simply are not as attractive as debt for community banks.

Another alternative would be to go to non-shareholders and sell them common stock or preferred stock. The problem with that is that the organization has to find buyers of the stock.

Even if the organization does find buyers for common stock, the offering will cause ownership dilution and possibly book value dilution (depending on the price) for the existing shareholders.

Why would you do either one of those when you can leverage the company fairly significantly as long as you are under $1 billion in consolidated assets?

If your organization has less than $1 billion in consolidated assets, take advantage of the congressionally mandated revisions to the Small Bank Holding Company Policy Statement and do not be confused by those who may be trying to sell you a product that works for them—but not for you.

More in this category: « Internal politics ... in your bank? When merger deals come undone … »
back to top