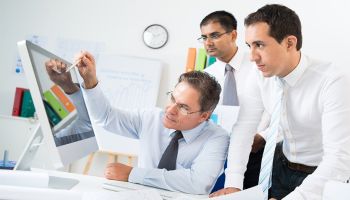 Bank executives, like so many of their colleagues in other industries, are undoubtedly aware of the fast-changing, tech-driven world that surrounds them—and the need for them to change swiftly to keep pace.

But, as one adviser after the next this week at the 2015 SNL Community Bankers Conference said, too many bank leaders are so enmeshed in routines established in past eras, so accustomed to habits that no longer produce results amid today's circumstances, that they risk losing relevance.

Speaking at the conference in Amelia Island, Fla., Dave Jennings, a change and leadership expert who is president of Business Acumen, said bank executives recognize that they need to continuously lead so that their company cultures evolve with the environment in which they are working.

Yet many do not realize they need to question their current routines and gauge whether they are appropriate for the market they are in or the business lines they run.

What worked 10 years ago, or even a few years ago, may no longer be relevant, he said. What was a successful approach not long ago, he said, may now be nonsensical.

But if these approaches no longer address customers' current needs or wants, he suggested, they have indeed become stupid.

In these cases, executives need to find a new story for their companies. But, Jennings said, corporate history is peppered with examples of prominent company leaders failing to make this happen. Think of Kodak and its pass on digital photography or Blockbuster's inability to develop an online business model or the newspaper industry's long struggle to operate profitability in the digital realm.

Can you enter today’s race?

Banks get that their customers increasingly want to do more of their routine banking business online or via mobile devices. Executives understand that new technology is important and constantly developing.

But, Jennings said, more need to revamp their company cultures so that their employees think more like innovators than like old-school lenders.

The company needs to not only spot new opportunities but explore new ways to capitalize on those opportunities, he said. Find ways to experiment and develop meaningful new ideas and approaches and then decide on which ones match up best with customers the bank knows it wants most. Then, he said, implement those new approaches. Important change can build off of this.

Don’t bog down in details when looking ahead

From Gren Blackall's perspective, this kind of thinking is what banks should be folding into their strategic planning. Too often, he said, banks in the process of strategic planning get caught up in debates about tactics—aligning resources to carry out tasks.

That work could be better handled in a separate business planning process, one that involves more people from various levels of the company, said Blackall, practice director at CCG Catalyst Consulting Group.

A strategic plan, he said, should involve the board and key executives and focus on who the bank wants to serve, which markets it needs to be in, what kinds of services it needs to provide or develop.

"It leads to productive discussions that can move the dial," he said.

From there, Blackall said, banks can then determine how to deploy their resources and how best to develop business plans to carry out the strategy.

Don’t write off young adults, and yourself with them

In today's environment, more than ever, banks need to get at the heart of what is and what could soon become in demand in their markets, Paul Schaus, president and CEO of CCG Catalyst Consulting, told SNL at the conference.

For example, banks in markets with large populations of young adults need to be developing ideas to draw in those people now because, while they may not be profitable in 2015, it will not be long before they are gaining prominence in corporate America, establishing themselves in high-paying jobs and needing banks to help them manage their finances.

"Community banks will be wiped out if they don't pay attention to their markets," Schaus said.

Do key stakeholders understand your will to change?

Mark Menting, a partner at Sullivan & Cromwell, said banks must not only craft strategic plans; they need to clearly communicate them to both investors and regulators. If they fail to do this, they could become vulnerable to activist investors or even invite hostile suitors. Or their stocks could suffer and this, in turn, could hurt their ability to pursue growth via mergers and acquisitions.

Regulators, too, want to be engaged on this front, he said. If they are not, regulators may not understand why a bank is taking the risks it is, and heightened regulatory scrutiny could follow.

Vital to a strong strategic plan is an assessment of where the bank is now, where it wants to be, how it intends to get there and a way to measure progress toward getting there, Menting said at the conference.

"If you don't measure it," he said, "you probably will have wasted your time."