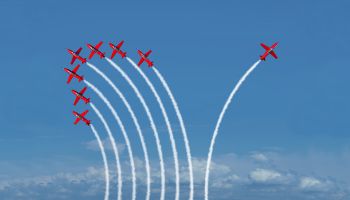 In this day of corporate governance concepts that can grow somewhat arcane, it’s handy to get to the bottom of why these issues are really important. One hot current issue is “independence” in governance.

My first recollection as a banker of any serious and sustained discussions of job “independence” in the org-chart reporting sense arose in the years immediately following the examiners’ insistence that banks be required to have formal, written credit policies. With policies in place, examiners could then assess how reasonable those policies were, and “audit” the behaviors of the lenders against that policy.

However, it’s impossible for examiners to enter a bank every 18 or 24 months and thoroughly audit compliance with policy.

So the next step on the examiners’ list was the installation of formal loan review systems. This is the mechanism used to monitor the quality of the loan portfolio (as measured by the relative lack of risk) and to manage it within appropriate tolerances. It’s a key internal control mechanism.

One absolute requirement for an effective loan review process is the independence of the loan review function itself. Loan Review cannot report within the same authority structure as Lending—not if it is to be truly independent.

I remember living through the oil field depression in the early 1980s. I observed close up the importance of an independent and objective perspective on each and every credit exposure. My bank failed in October 1983 and, while not a byproduct of a lack of an independent loan review, that ending directly reflected on the culture of the bank and how difficult it was to separate the consequences of certain behaviors from an excessive exposure to loss.

The arguments and tug of war between staff and line became part of the life of every banker in those days. Most of the time, in my experience, it was a healthy tension. And having that tension assured that, ultimately, credit policies were faithfully carried out. Members of bank audit staffs had similar experiences and the banks and indeed the industry is better for the transformations these changes required.

Thinking back today nearly a generation later it seems remarkable that we as an industry were able to make that conversion to the independence of certain functions.

That journey was not easy. But it was essential.

Today we seem to be in the middle of a running gun battle at certain banks that has similarities to the independence issue of the 1980s and 1990s.

In this case, the debate is over whether the positions of chairman, president, and CEO of an enterprise should be combined in a single person. It’s not an issue limited to banking, either, but banks have been in the news on both sides of this issue recently and Bank of America has become a focus of the current conversations.

In 2009, BofA’s board relieved its then top officer of the title of Chairman, leaving him the titles of president and CEO. An outside director assumed the chairman’s function. Stockholders and those interested in corporate governance matters generally lauded this as a prudent separation, giving the directors a degree of independence to more freely examine, question, and understand the CEO’s actions.

Looking back at that transition: The bank had, during the previous several months, acquired Merrill Lynch and several failed banks at the behest of the supervisory agencies. It also required TARP assistance during this tumultuous time.

A good time for some independent viewpoints.

The bank has since experienced a return to financial health and is operating successfully and profitably. It is largely free of the problems and concerns besetting the industry in the wake of the Lehman bankruptcy and the negotiation of the Dodd-Frank Wall Street Recovery and Protection Act that was passed in 2010.

Last year, the bank’s board restored the chairman’s title to Brian Moynihan, the bank’s current president and CEO. This ignited a vigorous and at times acrimonious debate among shareholder groups, including activist groups, regarding its appropriateness.

Philosophy aside, it’s about risk management

The appropriate vantage point of any serious discussion of this issue should be on its impact on risk management:

Does a board of directors have ample and adequate opportunity to freely discuss areas of concern among its members?

It’s important to stress that Moynihan’s qualifications to hold the bank’s top job is not a component of the current controversy.

I acknowledge that there’s a world of difference between Bank of America or any of the industry giants today and that of a typical community bank. To try to create an equivalency is foolish.

But in the presence of a strong and persuasive personality of a CEO, is the board forming its assessments and drawing its conclusions in the best possible way?

Are discussions and concerns being properly “ventilated”?

And are the consequences of certain policies and actions adequately understood?

This is a matter of concern for the full range of any bank’s major stakeholders, as well as for the ultimate safety and soundness of the institution itself, large or small. I harken back to the occasionally difficult discussions and interactions that happened as we were coming to grips with an independent loan review as the standard for our industry, 25 and more years ago.

Today the tasks are similar in that the objectives, then and now, are better identification and control of risk.

When we look at the cyclical nature of banking itself, it’s hard not to recognize the outsized impact that some individuals have had on operating results when acting with insufficient counsel from those charged in a fiduciary way with the ultimate soundness of the institution.

It’s a consideration that should be given some thinking time in any shop that makes loans.

More in this category: « Defaulting borrowers: How well did you know them? Reputation, systemic risk, and bugs in the system »
back to top