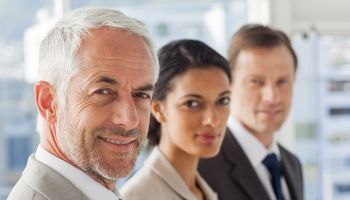 Banking industry observers say that CEO age often plays a role in a bank's decision to sell, but the precise degree to which it is a factor is hard to measure.

"It sure seems like there is a connection," Peter Wilder, an attorney with Godfrey & Kahn, told SNL. "I've definitely seen some specific examples of banks selling because the CEO wanted to retire and the bank had not adequately planned for a transition."

Wilder said CEO age is surely one of the accelerants to some of the consolidation the community banking industry is currently experiencing.

Baby Boomers are today's senior executives and are in the midst of their "collective retirement party," he said. That dynamic creates opportunities for buyers. "If banks aren't careful, they can find themselves in a position where they have to sell and have very little negotiating leverage because the potential buyers know the seller's board does not have any alternative once its executives retire," he said.

Wilder said boards at high-performing banks often push executive management to identify and develop successors; this is sometimes a specific "to do" item in their strategic plans.

Stacy Stevens, president and CEO of Park Avenue Group, an executive recruitment firm that focuses on the banking industry, told SNL there are additional considerations that come into play with many M&A deals: The first is whether a bank has selected an heir apparent and begun a grooming process leading up to the anticipated retirement of the incumbent. If banks are not so prepared, a sale may be the best course of action, she said.

"Having someone prepared and ready to take over leadership is not always available, and in those situations the future of the organization is definitely a concern," Stevens said.

The composition of the board, directors' ages, and the equity ownership investment of key executives also impact an organization's future path.

"At some point most board members want to recoup their investment through a successful sale at desired book values, regardless of age," Stevens said. "The timing just becomes more important and the desire more pressing as the CEO nears retirement age."

Diana Chase, managing partner of community bank consulting firm ChaseCompGroup LLC, said she is aware of banks with aging CEOs that are planning to sell—although they tend to keep such information close to the vest.

But in many cases she noted that other factors are at play. For example, she said a CEO's age alone would not necessarily lead to a sale, but in cases where the CEO is a founder, a strong performer, and heavily influences the board, the bank could consider a sale strategy when the CEO is nearing retirement age. In many such cases a CEO may have founded the bank with some of the board members or at least helped recruit them, she said.

And if there is not a strong successor in place or even a potential successor within the organization or on the board, then the directors are often forced to consider a sale strategy.

Warning signs that sale’s in offing

"This could be a sign that the board is planning a sale when the CEO retires. Of course they simply may be rewarding executives who built the bank and had a good run and want to treat them well in retirement and still may not be planning to sell," Chase said.

Plenty of gray hair on the buy side

Of course, some banks with CEOs in their 70s or even 80s have not been shy about being on the other side of M&A deals.

And M&T Bank Corp. Chairman and CEO Robert Wilmers, age 80, was behind one of the most talked-about deals in recent years in the bank's pending acquisition of Paramus, N.J.-based Hudson City Bancorp Inc. 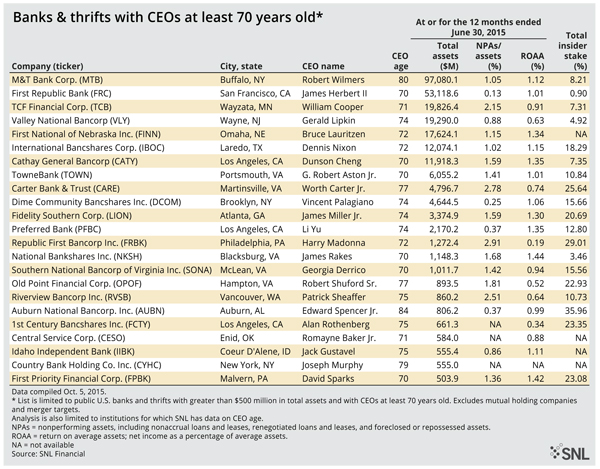 This article originally appeared on SNL Financial’s website under the title, "CEO age plays a role in M&A, but exact impact is tough to gauge."

For a helpful series about many aspects of management succession, by consultant John Szold, click here.