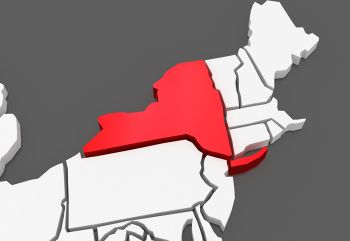 KeyCorp shares tumbled after the company announced a $4.1 billion deal to acquire First Niagara Financial Group Inc. that seemed to not quite meet investors' and analysts' expectations.

Among the key issues in the deal was uncertainty about the earnback period for the dilution in the deal—which company management said would be six years, even as some sell-siders projected earnback periods for the transaction as long as 17 years. KeyCorp announced on Oct. 30 that it buy Buffalo, N.Y.-based First Niagara in a $4.1 billion cash and stock deal, with the sides valuing each share of First Niagara at about $11.40. [Editor’s note: SNL Financial originally published this article the same day.]

Company executives touted the strategic potential of the transaction during a deal call, citing immediate costs saves in technology and the opportunity to put excess capital to use, as well as the overlap between the banks' branch networks in First Niagara's markets.

But analysts on the call questioned why the company was paying up for another franchise instead of repurchasing its own shares with a lower valuation, and the company's shares had fallen more than 6% by 1 p.m. during trading after the deal was announced.

Those declines came on the back of a drop in the shares on Oct. 29 after the deal negotiations were leaked before afternoon trading, and after the deal announcement it is clear that the company has much to prove to a skeptical market.

Much of the focus among analysts during and after the call was the tangible book value dilution earnback period for the deal. Crucially, the company included portions of its expected revenue synergies to reach its six-year expectation.

Chris Mutascio, an analyst who covers the company for Keefe Bruyette & Woods Inc., noted that investors are often skeptical about revenue synergies when they evaluate deals, and added that "the market and investors are looking at those energy synergies and wondering if they are just potential, and what the timing is of getting those synergies."

He added that "I don't think people are giving a lot of credit to that, at least right now." Mutascio also said he was somewhat "confused" by the accretion estimates given by the company for the deal, explaining that KBW's modeling of the deal produces "two to three times" the EPS accretion guidance given by the company. 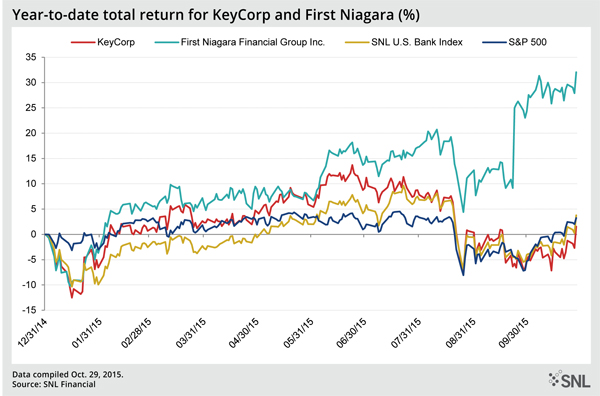 The exact timing of the earnback period and the overall pricing of the deal were a point of contention for analysts both during and after the deal call. Evercore ISI analyst John Pancari said in a note following the call that he estimates an earnback period of more than 17 years. He wrote to clients that "the purchase price appears full given a long (and debatable) payback on tangible book dilution."

Marty Mosby III, Vining Sparks IBG LP director of bank and equity strategies, said he estimated the earnback period, minus revenue synergies, closer to the 10-year mark given by executives during the call. 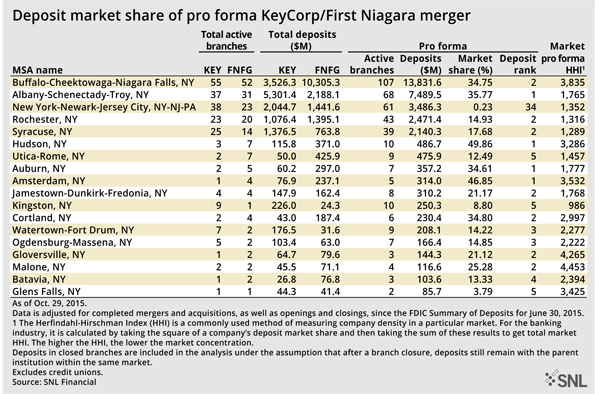 He raised questions, however, about the overall compatibility of the franchises, arguing that First Niagara does little to boost KeyCorp's strong commercial and corporate lending segments.

"It wouldn't be the type of business that we hoped KeyCorp would be able to find … strategically, it's not a great fit," Mosby said during an interview with SNL.

Lana Chan of BMO Markets Capital Markets Corp. echoed those comments in a note she wrote after rumors of the deal surfaced on Oct. 29. "Aside from the immediate cost-savings, we are not so sure what [First Niagara Financial Group Inc.] would add to [KeyCorp]'s franchise besides more scale in a slow-growth market and the potential to add regulatory risk given [First Niagara Financial Group]'s back office problems," Chan wrote.

There seemed to be a general agreement, however, that the bank had few other realistic options to put to use the excess capital with which it has been operating. "I don't think they had a lot of choices … they can't really dig into their excess capital except for going out and doing a bank acquisition like this," Mosby said, noting that CCAR banks like KeyCorp are limited in their ability to return capital to shareholders via dividends or buybacks. 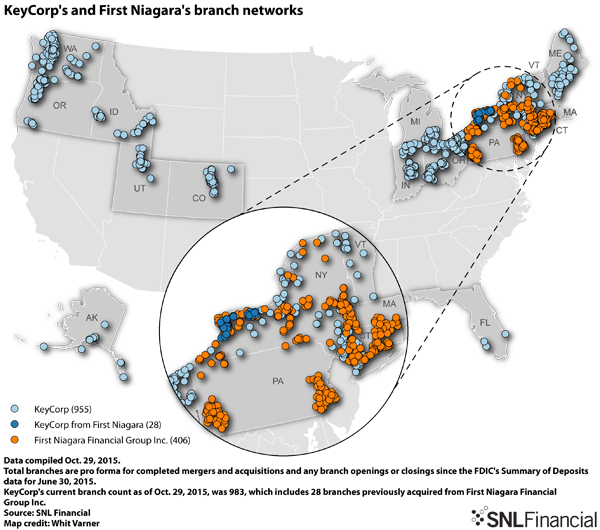