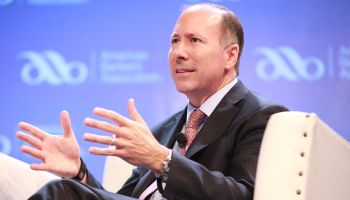 ABA’s Nichols: “Ending ‘bank-on-bank violence’ is extremely important, particularly as it pertains to advocacy. … We have more influence and more clout by working together than apart.”

"I don’t want to just represent the banking of today,” says Rob Nichols. “I want to be mindful of what the banking sector will look like five, ten, 20 years from now.”

That’s an indication that the new chief of the American Bankers Association is not solely focused on near-term lobbying goals. Having spent four and a half months as “incoming CEO,” Nichols on Jan. 1 dropped “incoming” from his title and became president and CEO of ABA, succeeding Frank Keating, who retired.

Nichols, 46, was raised in Seattle and is a graduate of George Washington University. He worked on Capitol Hill for two Washington State elected officials, the late Rep. Jennifer Dunn and Sen. Slade Gorton, both Republicans, and as an aide in the office of the Chief of Staff for George H. W. Bush. Later, he spent four and a half years at the Treasury Department, where he was assistant secretary for public affairs.

Following his Treasury stint, Nichols joined the Financial Services Forum as president and CEO in 2005, where he remained until last July. The Forum comprises the CEOs of 18 of the largest financial institutions with operations in the United States. The current chairman is Brian Moynihan, CEO of Bank of America.

In addition to a focus on advocacy, Nichols, a regular Twitter user—@BankersPrez—will position ABA to help prepare members for the convergence of banking and technology.

The following dialog has been edited for length and clarity.

Q1. You had a long transition period. How did you make use of that time?

It afforded me an opportunity to reach out to key stakeholders, one being state association executives. I invested much of that four and a half months in getting to know that group.

Number two: I assessed the staff. I went to a lot of the divisional staff meetings, walked the halls, and got to know the team.

And three: I did outreach to member CEOs, starting with the board, of course, but then moving past that to CEOs of community banks, regional banks, midsize banks, and some of the larger banks.

The regulatory and legislative stakeholders, and people in the administration, I’ve known from the other positions I’ve had in Washington.

Q2. Now that you’re past the transition, what policy or organizational areas will you be focusing on?

Four areas are important from a strategic standpoint. Regulatory relief will remain hugely important, particularly given that we achieved little in the way of relief in the last session of Congress. Focusing on the supervisory framework—which is ill-suited and wrongly tailored, in my opinion, particularly for smaller banks—will remain a key area of focus in 2016 and, certainly, 2017.

Number two is bank unity. Ending “bank-on-bank violence” is extremely important, particularly as it pertains to advocacy. There’s been a Balkanization of the banking sector over the last several years, much of which has been caused by the artificial thresholds of Dodd-Frank—$1 billion, $10 billion, $50 billion. We have more influence and more clout by working together than apart.

Also, our existential threats are not banks of varying sizes, but non-bank lenders, credit unions, changing demographics, and technology.

Three: Millennials are now the largest chunk of our nation’s demography at 84 million. Research suggests millennials would rather go to the dentist than hear from their bank. There’s an alarming number of them who don’t think they’ll ever need a bank—who don’t see the utility of our services. We need to think about how do we speak to them, how do we market to them.

Last is the rapid convergence of banking and technology. In 2014, about $12 billion went into fintech. I suspect when they calculate 2015, it will probably be $20 billion to $40 billion.

To the extent we can, we should try to partner with these companies. But, at the very least, we need to be mindful that we don’t create another unlevel playing field. We already have that with Farm Credit and credit unions.

The last thing we need is a new group of market entrants offering products and services close to identical to what a bank offers, where we are highly regulated and they are not.

Q3. Every time the industry’s image seems to improve, a fresh reminder of 2008 comes out in the form of a settlement, a movie, or what have you. Do you think anything can be done to overcome that?

As an industry, we’ve had significant reputational headwinds that impact the conversation with the administration, legislators, and regulators. The one thing that we have to our advantage is that there is no other industry that can do what we do in the form of economic growth and job creation.

When you talk to millennials, so many of them want to be involved in making their community better. I think we can say to them: “You want to make an impact in your local community? Go work at a community bank, and you will quickly discern how banks can make an impact.”

Q4. ABA represents the entire industry. How do you keep all the players working together, given that all the various segments do not always like each other or agree on the issues?

Part of what was so appealing about the ABA is that it represents all banks. It is the one group that can be the leader on this issue of bank unity.

I’ve talked about this to several bank CEOs—at banks of all sizes—and they agree that a unified sector will have more influence and clout. When I served on Capitol Hill, I worked in a tech-centric congressional delegation. When different [tech industry] groups would present different priorities, the takeaway for the elected officials was: “This industry is all over the place; they don’t seem to have any common vision or message. I’m not going expend any capital to help them.”

I also would note that bad policy proposals trickle downhill. If you look at Dodd-Frank, you see a lot of negative consequences that have been thrust upon smaller banks.

I’ll say this, too: Our financial ecosystem is interdependent.

Q5. You speak of the importance of unity, but in reality, ABA and Independent Community Bankers of America compete for membership and on other levels. Do you see that changing?

I’ve been involved in advocacy for the financial sector for a very long time, so I have pretty sharp views on this. On any big advocacy campaign, we are stronger together as a community. I’ve spent a lot of time with the other financial trade groups. They are stakeholders as well. So when a strategic course of direction on any kind of legislative issue is set, my immediate goal is to call the heads of all the other financial trades and say, “I think this particular strategic direction make sense; let’s work on this together.” I’ve seen advocacy up close and personal both in and out of government, and when the business community is united, they are just simply more effective than when they’re not.

I realize there are members that overlap among the various groups. I get that. But from an advocacy standpoint, we are simply stronger when we work together. When you look at the last five years, much of how we’ve been measuring success has been stopping additional bad things from happening. And that’s not an encouraging way to measure success. Because of that, the idea of working together resonates.

Q6. Regarding the failure of major regulatory reform legislation to move in 2015, how do you look at what happened, and what are the prospects for 2016?

It was extremely disappointing that the omnibus spending bill did not contain some measures of regulatory relief, particularly for our smaller banks. I think there was a huge lost opportunity to help improve the economy.

Obviously, trying to pass regulatory relief on a spending bill is not ideal, but there just were not other opportunities to move that legislation. The general discord and dysfunction in Washington is creating huge headwinds, and the fact that there’s very little standalone legislation is troubling. On top of that, having all banks over $10 billion pay for a significant portion of the highway bill was highly offensive, in my view.

This year, obviously, will be very challenging to do legislation in any area. When you look at 2008 and 2000—the eighth year of a presidency coinciding with a presidential election—typically very little significant legislating gets done.

That said, we will keep pushing. We have folks in the House who are interested in trying to help, and Sen. Shelby (R-Ala.), as well as a number of Democrats [in the Senate], made it clear that they want to try to move regulatory relief.

Last year served as a wake-up call for the entire industry for how poorly many in Congress view banking. As a sector of the economy and as a group, we need to be very deliberative and rethink about how we engage with Washington.

Q7. What things need to change?

I think we should take a step back and look at every way that our sector interacts with the public policy community. The entire architecture of our political engagement and how it’s viewed should be assessed. I believe we should be more politically muscular. We’ll determine, over the weeks and months ahead, precisely what form that should take.

We’re going to have a new president and we’ll have a new Congress in 2017. That’s an opportunity to hit the reset button with Washington. So 2016 will be a year of organization, a year of assessment, a year of reflection, and a year of planning to get ready for 2017, when we’ll again have a whole new group of players in Washington.

This article originally appeared in the 7 Questions department in the February-March 2016 edition of Banking Exchange magazine. Click to see the article in magazine format.