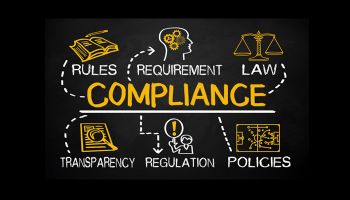 This political season, the behaviors of bankers are a prominent discussion topic among large and important segments of our national economy. Many feel that egregious behaviors of bankers, especially from very large institutions, are at the root of the excesses that were flushed out of the system by the Great Recession and the legislative aftermath culminating in Dodd-Frank. For those people, more compliance activity is the antidote.

For my part, I think that there’s something going on that bears watching as it can tell us much about the future of the banking industry in stark contrast to the way we’ve customarily done business for generations. Consider the difference between activities described as “compliance” and those described as “risk management.”

The activities and objectives of each are self evident—or are they?

Is compliance winning over risk management?

Smaller banks, on whom the new and evolving regulatory burden falls most heavily in terms of overhead burden, seem to be emphasizing compliance activities over risk management activities.

I see more articles in industry journals and in the financial press on compliance than on running the business.

Even the classified employment ads suggest that there are stronger employment opportunities in compliance than in risk these days. Unquestionably there is a greater interest in compliance since the imposition on the industry of the Consumer Finance Protection Bureau under Dodd-Frank. And you know that’s just part of it.

Senator Sanders describes himself as a “democratic socialist.”  Having grown up working in one of the most capitalistic of industries, I was driven to the dictionary and to Wikipedia for a better and more specific sense of what that term means.

In its simplest sense, socialism means the public ownership and control of the factors of production. Democratic socialism means that there is a democratic process that oversees and controls (at a minimum influences) that process. There are variants of this basic theme but they are not the point of this discussion.

Rather, the idea that seems to animate Senator Sanders and his supporters is that today there is an increasing role for government to play in the resource allocation process and a contracting role for free markets. For bankers, that means a more intrusive government in the allocation of our national monetary resources.

What has occurred to me in the course of this campaign season is how compliance seems to be a very prominent and increasing part of banking’s future. As government incrementally inserts itself into the allocation and management of our national resources, we are incurring new and expanding burdens of compliance with government fiat.

In other words, I see a direct correlation between government intrusion and the resulting chores of compliance. Increasingly, to the executive managers of banks, the sources of risk are subtly shifting from the marketplace to the government.

I’m not defending the behaviors of the big bank bankers who engaged in circumventing Bank Secrecy laws, aided terrorist organizations in moving money in illegal ways, engaged in price fixing of rates, and made a shambles of good management and fair dealing with customers trapped in the collapse of the housing markets. Nor am I giving a pass to the smaller banks that in their appetites for fee income gouged their customers with excessive fees and cut corners in customer service that reflects poorly on the banks themselves.

No wonder we have earned the ire of the banking public.

What’s happening now is an introversion of focus from the market, the needs of our customers and communities, to one of internal process and an obsession with form over substance. One is dynamic; the other is static and stifling.

Are we are becoming “closet” democratic socialists as we take our eyes off the market while increasingly obsessing about form? I think this is a real worry that bankers should be talking about. It goes beyond mere burden.

Compliance does not build the business. Yet it’s necessary to accomplish the legitimate ends of law and social policy. It’s a check-and-balance mechanism never meant to be an end in itself as seems to be happening in our brave new world of market subordination to bureaucratic fiat.

Thoughtful bankers today do not subscribe to tearing down bank regulation and law. We’ve demonstrated during the last 15 or so years how badly our complex economy needs the parameters that law and regulation provide and how irresponsible behaviors flourished under the “light touch” regulatory climate following the repeal of Gramm-Leach-Bliley in 1999.

We need a renaissance of risk management, not compliance management. We need a creative focus on ways to expand revenues and respond to the needs of the marketplace.

The discussion today on rebuilding our national infrastructure strangely ignores the role of banks in expanding a community’s capacity for growth and renewal. Banks have historically helped renew our housing and capital asset stocks and energized and facilitated the growth of human capital in entrepreneurial activity. We need only  to look around us to see what banks have contributed directly and indirectly to our local communities.

Let’s open our windows, not close them. Let’s orient ourselves to the risks of the market place and how to creatively expand our businesses in prudent and productive ways.

Compliance activities have their place and their utility. They should not be driving the bus.

More in this category: « “Credit people, this is your wakeup call” Why don’t we water our garden anymore? »
back to top