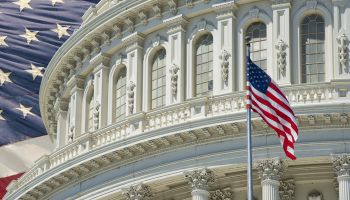 Capital requirements, appropriately administrated, will do more to protect the banking system and the public than a raft of Dodd-Frank and related legislation, the Republican heads of the Senate and House banking committees told attendees at the American Bankers Association’s recent Government Relations Summit.

Both Richard Shelby (R.-Ala.), chairman of the Senate Banking Committee, and Rep. Jeb Hensarling (R.-Texas), chairman of the House Financial Services Committee, spoke of the importance of capital to the financial services business in speeches separated by a day at the summit, held March 13-16.

The committee chairmen spoke of the difficulties of obtaining cooperation towards regulatory reform with Democrats, from the Administration to fellow members of their committees. Both attacked efforts of the Consumer Financial Protection Bureau, a creature of Dodd-Frank.

Hensarling, after delivering a detailed rhetorical attack on the status quo in financial regulation, turned to some specifics concerning a financial reform package that House Banking Committee Republicans have been developing. Shelby discussed the progress of pro-industry legislation his committee has worked on. Both referred to resistance from regulatory agencies to reform. Both also criticized efforts to increase credit union business lending authority, through regulatory means, by the National Credit Union Administration.

Shelby did not touch on nonbank fintech competition, but Hensarling, in response to a question, suggested dealing with this threat not by regulating fintech, but by freeing up banks to compete more vigorously.

An opponent of regulatory overreach, Hensarling’s answer on the latter followed on his comments regarding the concept of tailoring regulation to a bank’s scope and complexity. While he backs that philosophy as a short-run measure, he said that tailoring isn’t needed if regulation goes away, which would be his preference.

Hensarling’s response to regulation of fintech companies was in keeping with this answer. He said that he wants to see robust capital markets, and that less regulation is his preference.

So, regarding fintech, Hensarling said, “The answer isn’t necessarily to bring them down, but to bring you [banks] up.”

Shelby questioned Dodd-Frank’s reliance on regulators as a barrier to financial trouble when “they have repeatedly failed to do so in the past.”

“More regulation”—which Shelby said some on the Hill clamor for even as some Dodd-Frank rules remain to be written—“does not necessarily mean better regulation or a financial system that is less prone to crisis. In fact, an over-reliance on regulators to achieve financial stability can sometimes mean just the opposite.” 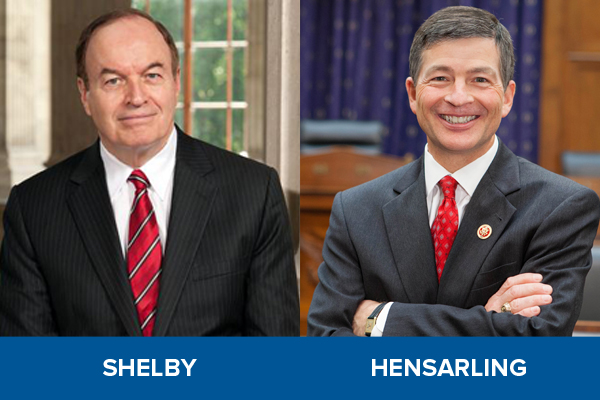 Capital is the answer

Hensarling spoke at length of the strength of free enterprise with less regulatory involvement. “Washington’s regulatory waterboarding is drowning community banks and small businesses and sinking the hopes and dreams of millions of low- and middle-income Americans,” said Hensarling. “I need not tell you we are losing, on average, one community financial institution every day in America.”

Hensarling pledged that “I will not rest until Dodd-Frank is ripped out by its roots and tossed on the trash heap of history.” Through his speech he referred to Dodd-Frank as the “Obama Financial Control Law.”

Hensarling attacked Dodd-Frank’s attempts to promote financial stability, from its approach to “too big to fail” and its “orderly liquidation authority” which he predicted would cost taxpayers billions. He cited research on this by the Congressional Budget Office.

“This is bad policy and worse economics,” said Hensarling. “It erodes market discipline and risks further bailouts. It becomes a self-fulfilling prophecy, helping make big firms bigger and riskier than they otherwise would be.”

A key element of Hensarling’s pending legislative package, he said, would be a stress on capital—potentially, more capital, as a tradeoff from what he characterized as “micromanagement” through regulation. At the same time, he questioned U.S. adherence to international regulatory standards for capital such as Basel III, which he said had created rules that were “even more complex and controlling.”

“The bold and better alternative you will see from committee Republicans will provide vast regulatory relief for financial institutions in exchange for meeting high, but simple, capital requirements,” said Hensarling. “If financial institutions elect to hold strong Tier 1 capital, then they should gain relief from both Dodd-Frank and Basel’s burdensome regulations, neither of which were meant for community banks.”

“Many community banks will not,” Hensarling said. “Regardless, the option remains with the bank. But if a bank chooses to have a fortress balance sheet that protects taxpayers and minimizes systemic risk, then bankers ought to be allowed to be bankers. It’s that simple.”

In his speech the next day, Senator Shelby supported increased capital, with the warning that taken to excess, capital requirements could go awry.

“Make no mistake,” said Shelby, “I have always been a proponent of strong and transparent capital for banks. I believe that a well-capitalized banking system is much more preferable to the Dodd-Frank approach of regulatory micromanagement. Where there is sufficient capital, there should be no need for excessive regulation.”

Shelby added that the right level of capital should “ensure that there is financial stability and should eliminate the risk of taxpayer bailouts. Such goals are paramount. But, they would not be accomplished by making banks utilities. Utilities have their place in our economy—albeit limited—but it is not in banking.”

Shelby warned against any plan that would reduce competition and consumer choice or disconnect risk and return by artificially shielding an organization from losses.

“I do not want our banking system to become Amtrak,” said Shelby.

“We should want to have a system where banks are well-capitalized, well-managed, and well-regulated,” said Shelby, “but not over-regulated.”

Shelby noted that the Financial Regulatory Improvement Act of 2015, reported out of his committee last May, among many features would provide a regulatory framework that’s based on a bank’s systemic risk profile and not just its asset size.

“In numerous meetings and hearings with regulators, it has become evident that the automatic, $50 billion threshold for systemic risk regulation has no evidentiary basis,” said Shelby. “I believe that is a blunt instrument that acts as a substitute for more sophisticated and thoughtful supervision.”

Shelby referred to difficulties working with the Democrats on his committee, pointedly referring to Sen. Elizabeth Warren (D.-Mass.). [See, “Larger than life, and not even there”]

Warren ranks eighth out of ten Democrat members of the committee. Nevertheless, said Shelby during his Q&A session, when there is a vote the minority members “look around to see how she feels that day, which I don’t think is good for legislating.”

Added Shelby to this observation about Warren: “We’ve [Senate Banking Republicans] raised the bar on regulatory reform. [But] the regulators will push back because they don’t want to be questioned at all. It’s our job to do this and it’s our job to keep it up.”

During his Q&A, Hensarling noted that one of the parents of Dodd-Frank has gone on record as allowing that some changes would be appropriate.

“If Barney Frank can say ‘let’s make a few revisions,’ I would think that that would make a good case to any Democrat,” said Hensarling.

Not much hope for any final action was held out in either politician’s speech, nor by a panel of members of Congress. [See "Larger than life, and not even there"] Shelby did held out some hope for action during a lame-duck session after the elections.

“Be patient,” Shelby told the bankers, “but don’t be too patient. Get involved.”  He urged listeners to tell their congressional representatives what Dodd-Frank is doing to their communities.

An issue hanging fire since the financial crisis is reform of the secondary mortgage market. Right now, Fannie Mae and Freddie Mac remain the centerpiece of the secondary market, Shelby said, and while he has pressed for change, there’s been no cooperation or interest from the Administration.

“I don’t see action within the next two years,” said Shelby, but he added that, “around here, you don’t know, you might be surprised.”

Beyond his thoughts on capital, Hensarling said his pending framework would demand more accountability from both bankers and financial regulators. “We will toughen penalties for those who engage in wrongdoing and defraud consumers,” he said.

• Cost/benefit tests. Hensarling believes every new proposed regulation should be subjected to cost/benefit analysis before agencies put it into place.

Noting opposition to this concept, Hensarling said, “only in Washington is this called ‘dangerous.’ In my hometown and yours, it’s called common sense.”

(Shelby specifically urged such a requirement on CFPB, and elaborating, said he had suggested the idea to Federal Reserve Board Chairman Janet Yellen. “She dances around the question,” said Shelby.)

• Federal Reserve reform. Hensarling believes that post Dodd-Frank the Fed can “control every major corner of the financial services sector of our economy. And it can do so as part of a shadow regulatory system that is neither transparent nor accountable to the American people.”

Without congressional action, Hensarling suggested, Americans might find one day that “our central bankers have become our central planners.”

Both dislike CFPB and its record

Neither politician had anything but criticism for CFPB. Shelby said he wants to eliminate the bureau, but gave no hint of optimism on that score. Instead, he supports replacing the governance structure there of a single director with a board or commission, similar to FDIC’s bipartisan board or that of the Securities and Exchange Commission.

Hensarling ticked off results of CFPB action that he felt harmed consumers. The growing disappearance of free checking accounts was one. Another was the Qualified Mortgage regime, which he said was denying many black and Hispanic borrowers of homeownership opportunities.

Hensarling went through a detailed criticism of political progressivism, which he equates with governance by an elite that believes the common citizen is not smart enough to look out after his own good.

“The bureau typifies not only the shadow regulatory system, but also the unfair Washington system that Americans have come to loathe: powerful government administrators, arbitrary rules, and unchecked power to punish or reward,” said Hensarling.

In February the NCUA Board approved a final rule that further liberalizes treatment of credit union business lending. This came up in Q&A for both chairmen.

“This is on our radar screen,” assured Hensarling.

“I’m always wary of credit unions getting into commercial lending,” said Shelby. “We saw what happened when the thrifts got into it and what it meant to the taxpayers.”

Both the Monetary Control Act of 1980 and the Garn-St Germain Depository Institutions Act of 1982 liberalized savings organizations’ commercial lending powers. Some observers have blamed these statutes for savings institution difficulties and failures in the 1980s.