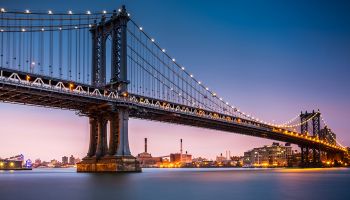 This viewpoints article comes from The Financial Revolutionist blog. Banking Exchange invites comments in the section below the article. Proposals for new submissions of viewpoint articles or UNconventional Wisdom blogs should be sent to the attention of [email protected]

Hey, let’s take a tour of the Manhattan Bridge,” said no one ever.

However ancient and unreliable, the Brooklyn Bridge remains the iconic New York river crossing that can do no wrong. Its image, clichéd as it may be, appears on millions of postcards, t-shirts, and biceps, representing New York’s past and present in all its gritty beauty. My own firm uses it on our website. Visitors and residents cross it by car, bicycle, and foot.

No such love or even awareness exists for the Manhattan Bridge, the Brooklyn Bridge’s northern neighbor by just 1,800 feet to the north, along the East River.

Span had lots of promise

When construction began on the parallel span in 1901, the general public was led to believe that the technological innovations incorporated into the Manhattan Bridge were going to transform (i.e., disrupt) the burgeoning suspension bridge industry.

The advances stemmed from the work of celebrity engineer Josef Melan (some engineers were rock stars back then, too), whose “deflection theory” was the talk of the infrastructure world at the turn of the last century.

Melan’s work offered the promise of a stronger and more flexible bridge than anything that had come before it, requiring far less material, manpower, and construction time. “Better, faster, and cheaper” was the mantra.

New York City’s growth as the nation’s center of commerce and finance required better access to bedroom communities in Brooklyn, across the river. The clogged Brooklyn Bridge needed a companion and the Manhattan Bridge was a no-brainer solution. Even The New York Tribune said so.

The beautiful dusty blue bridge opened in 1908 and functioned fairly well until subway trains began running across its flanks in 1915. That’s when the trouble began as the bridge shifted like a seesaw every time a subway crossed. The grotesque screeching that emanated from the subway wheels as they rumbled across the span added further insult to injury.

Lessons for fintech and banking

One hundred years and countless dollars worth of repairs later, the bridge remains a hot mess. It manages to function, but it still swoons under the pressure from the weight it bears and the subway screeching remains in full force to this day. (Ask anyone who spends time in the high-tech Brooklyn neighborhood of DUMBO—as in “Down Under the Manhattan Bridge Overpass.”)

There is simply no getting around the fact that the bridge was poorly planned, hyped, and rushed to completion by overconfident engineers and underinformed boosters.

Which brings me to fintech. 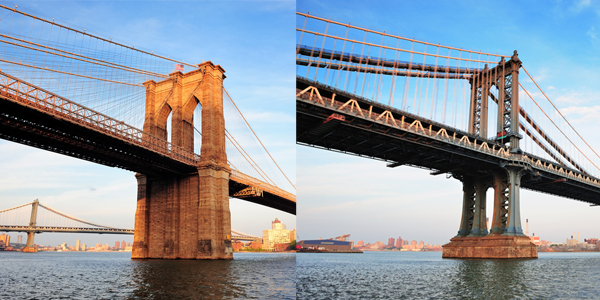 The beloved Brooklyn Bridge, left, even had a noted history book written about it. The Manhattan Bridge, by contrast, has, well, a history.

We think fintech has the potential to become a transformative bridge to connect people, companies, governments, and other institutions to the financial services they need. In so many areas—payments, blockchain, and digital currencies, online marketplaces, asset/personal financial management, remittances and capital markets tech, to name a few—exciting things are happening.

These developments, being hatched by both startups and larger firms alike, are showing great promise.

But recently, we’ve become concerned that as fintech grows, the obstacles to financial innovation will grow too. And while some friction is to be expected in any area as hot as fintech, we don’t want things to get messed-up.

Here are our main reasons for concern:

• Disruptor hubris. If we had a dollar for every time we’ve reheard the metaphor comparing banks to dinosaurs or to the taxi services being put out of business by Uber, we’d have enough to own a “unicorn.”

Underpinning this attitude is the idea that fintech startups will somehow obliterate the incumbent financial services industry in the next few years.

We think that this is unlikely because fintech isn’t “another sector.”

And, while there will continue to be some “us against them” tension, the divisiveness is unwarranted; incumbents and startups are part of the same family.

Fintech start-ups seek to satisfy the same needs as incumbent firms and while free from legacy encumbrances, many have too few customers, too much confidence, and too little respect for the regulatory environment in which they operate. Over time, promising companies based on solid technologies could falter as a result.

• Fintech is becoming too hyped in certain areas. Even though venture funding cooled in Q4, 2015, deal activity remains high, as do valuations, especially on the consumer side of fintech. Accelerators, incubators, and now startup factories have cropped-up to participate in the global fintech boom.

Many of these initiatives are crucial, because they compensate for the lack of financial services innovation in the years leading up to the financial crisis. Unfortunately, half-baked business models, me-too companies, and fintech “tourist” investors looking for a quick trade seem to be on the rise as well.

• Some large incumbents are riding the fintech wave without a plan. Just as politicians, commissioners and contractors jumped on the Manhattan Bridge project over a century ago, it now seems that every major incumbent is getting fintechier.

Although some large banks, payments companies, insurers, and asset managers are making solid progress, others seem to be grasping.

One reason may have to do with the boards overseeing large firms, which often consist of prominent financial and corporate executives whose last personal brush with technology involved a Commodore VIC-20.

With some notable exceptions, you’d be challenged to find many large firms represented by directors who have more than a topical understanding of cloud computing, enterprise software, or artificial intelligence, let alone how these innovations can reshape the financial services world.

Would you want to ride across a bridge whose construction was overseen by non-engineers?

Which bridge to your future?

If you find yourself in lower Manhattan or Brooklyn this Spring, we encourage you to reflect upon the Manhattan Bridge—in between your admiring gazes at that other bridge.

And when you do—and especially if you care about financial innovation—keep in mind that a solid foundation is the most important thing in building anything new and meaningful.

The commentary originally ran on the site on March 24.