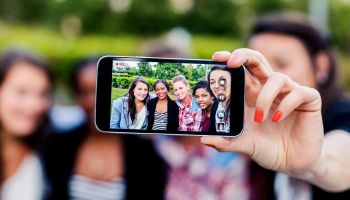 “What’s the most important thing for a millennial?” asks George Blankenship, marketing expert. “Experience. And what do they do when they have an experience? They take a selfie.”

George Blankenship’s resume is impressive. He’s worked with business legends Steve Jobs and Elon Musk—on top of 20 years at clothing retailer GAP Inc. Blankenship, whose current job is “director of smiles for the Blankenship family”—his third attempt at retirement—is an admirer of banks because they take care of people’s money. But he has a warning.

Steve Jobs lured Blankenship out of his first retirement because Jobs wanted to sell Apple products in the way that Banana Republic (a GAP brand) sold fashion—not like everybody else sold computers.

About eight years later, Elon Musk lured Blankenship out of his second retirement because Musk wanted to sell Tesla automobiles like Apple sells iPhones. You see the pattern.

Speaking to an audience gathered for the American Bankers Association’s National Conference for Community Bankers earlier this year, Blankenship delivered a triple shot across the bows of an industry known for uniformity: Be creative, be different, and don’t measure everything by ROI.

At Apple, Blankenship was the architect of the company’s retail strategy. After the first two Apple Stores opened, he faced criticism in the press, despite people
lining up around the block to get in. “An expensive and painful mistake” was the dismissive comment of one pundit.

“That’s when I realized, you can’t let anyone else get in the way of you doing what you know is right,” said Blankenship.

Critics are often internal, too. “What I hear a lot is, ‘George, that’s interesting, but here’s why it won’t work. . . .’ People are so focused on why it can’t be done,” said Blankenship, “that they totally lose focus on what is possible. As somebody said a long time ago, ‘It’s not impossible; it just hasn’t been done yet.’”

Most of his career has been about developing the best ways to interact with customers. He distilled this into three points:

First, design and deliver a great space—physical or digital. Next, hire people who are great with people
and want to interact with them. Third, “train them well, fire them up, and turn them loose.”

• They’ll be taken care of.

• You’re available to help them.

At the Apple Store, he explained, they accomplished this with the Genius Bar (a counter manned by trained technologists); workshops; and, for those who wanted one-on-one attention, an access plan for $99 a year, allowing them to meet with an Apple specialist once a week for a year. They also introduced an app that lets Apple Store customers scan and pay for a product with their iPhones and walk out without interacting with anybody.

Regarding Generation X and millennials, Blankenship said one common thread between them is they expect to be connected.

“What’s the most important thing for a millennial?” he asked. “Experience. And what do they do when they have an experience? They take a selfie.”

“My challenge to you is to figure something you can do at your bank that would make someone want to take a selfie with it. That’s how you get to this group.”

At Tesla, Blankenship helped shape a unique buying experience. In Tesla stores, you design your car—colors, wheels, etc.—and then, with a flick of your finger, an image of your car is projected on a giant wall screen, with your name on it. It was different, unexpected, said Blankenship.

“No matter how big or small your company is,” he said, “you can do something unexpected.”

“What if you read tomorrow that Apple will begin offering financial services to all customers worldwide? It’s not going to happen, but what would you do? You have to think that way,” he said, “because your industry is going to go through massive change over the next ten years. It happens in every major industry.” He ticked off the launch of Federal Express in 1973 and the iPhone in 2007 as examples.

It will happen in banking, he said. But will you be the one doing the changing?