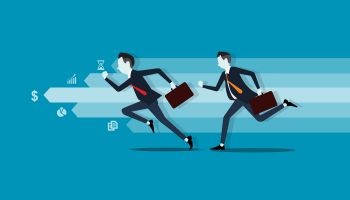 A banker friend said to me recently, “You can always tell which of banking’s product lines are unprofitable. They’re the ones that don’t attract any competition.”

And it certainly seems true. A convenient example to me is our safe deposit box business.

I remember many years ago when Sears acquired a stock brokerage business and the relevant marketing description was “stocks and sox.” Ultimately, that threat fizzled. Bankers of that day began to see regular and significant encroachments into their businesses and product lines by non-bank competitors. It just keeps happening over and over again now.

What chapped the bankers then, as much as it does today, is the fact that such competition is usually unregulated or considerably less regulated than the basic banking business of making loans and accepting deposits.

Some of us are learning on a first-hand basis that fintech businesses are directly competing with us in many areas and particularly in consumer and small business lending.

For all the headaches that this implies, it’s still very encouraging for banks.

Why? Because it means that our basic business continues to be profitable. If it weren’t, it wouldn’t be capable of attracting serious competition.

A simple way to look at this: If our basic business lines are profitable for new entrants, how much more valuable are they for those of us currently offering them?

That’s really good news when you think about it, given the concerns over the rapidly shrinking numbers of community banks.

The financial news is full of stories in recent months of how banks and fintechs are cooperating for the benefit of all providers. There are profit opportunities for our mutual and collective benefit. We should focus on how positive this is.

There are nevertheless several strategic concerns that are on the immediate horizon.

Regulatory roll back is politically impossible

First is the heavy weight of regulation.

We all understand that a modern economic society needs policing against abuses and fraud and that the “light touch” characteristic of the era post the Gramm-Leach-Bliley Act repeal in 1999 was a mistake.

So the industry position should not be that bankers should resist all regulation. Rather, we need to be our own leading advocates of reasonable oversight in terms of the public interest.

The current presidential political season is producing much discussion of what’s fair. Perhaps banks should adopt the language of some of the political contenders to make the case to the public in more familiar terms. Let’s make it clear to our constituents what “unfair” means to us.

It’s too late to roll much of the regulation back except around the edges. We’re likely to live with Dodd-Frank in a more or less recognizable way for a very long time. But it’s not too late to stamp out those practices that attract the attention of the CFPB and increase the ire of the banking public.

What is banking’s business model today?

Senator Bernard Sanders has stated that the business plan of banks is fraud.

With that kind of flag planted in the ground—especially considering Sanders’ appeal to young people, our newest and future customers—it’s plain that we have our work cut out for us to change that perception.

Does anyone actually believe that? I think the heat generated around the CFPB largely answers that question and we bankers shouldn’t like what that is telling us.

There are reasons to be concerned surrounding the business models of community banks. We continue to deal with the decades-long imperative of building operating scale and this will continue to exert pressures on banks to merge. The regulatory burden of compliance is also a compelling but more recent force tending to compress the industry into fewer banks of larger asset size.

Too Big to Fail

Conversations about breaking up the big banks into smaller pieces seem less urgent today. There is an encouraging tendency among the largest banks to simplify their product lines and the complexities of their business. That will help to deescalate the rhetoric around size and Too Big To Fail.

Total footings of the very largest banks have actually begun to decline, indicating that the process is underway. This should help to lower the industry’s political profile as a “target” and should mean significant opportunity to rebuild fences.

Compliance is a growing issue for banks for two reasons.

First, the cost of compliance is enormous. Arguably every dollar spent on compliance is a dollar diverted from opportunities to generate revenue. As a lender for most of my working years, I tend to think of today’s issues in terms of the impact on credit.

The second source of concern is the potentially very heavy non-financial costs of compliance. Today’s trends carry the near-term risk of changing the nature of commercial lending jobs away from “problem solving” to “problem avoidance.”   One likely result is a very different  perception of commercial lending as a desirable career choice.

This also has significant implications for how we train, incent, and maintain our workforces and their inherent competencies and competitiveness.

I’m encouraged, as I wrote at the beginning, that we continue to have viable products and businesses and that the ugliness of the last few years in the political and economic aftermath of the Great Recession seems to be receding.

But rather than becoming complacent, we need to be reminding ourselves that the business cycle is in a mature phase and already older than most of the recoveries since World War II.

We are likely about to revisit some old lessons and problems relating to asset quality. It’s time to start getting ready as they won’t wait on our convenience.

More in this category: « Do we just not get it? Is the banker obsolete? »
back to top