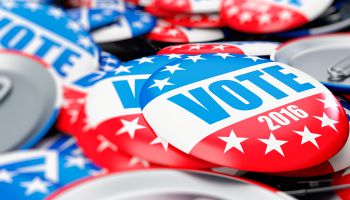 ’Tis the season to be jolly! Okay, maybe we are not quite there yet.

How about this: ’Tis the season to be political!

The issue I am going to address in this blog is whether politics has a place in our community banks, particularly in the boardroom.

Politics clearly has a place in community banking. Politics touches, in some fashion, everything bankers do.

This can be in the form of tax rates; regulatory reform; political appointees (we are looking at you, Richard Cordray); commodity markets, etc. Regardless of the forum, the point is the political environment can have a vast impact on the community banking industry.

The state and national trade associations are fierce advocates for their members’ interests. Both ABA and the ICBA, for example, have massive government relations machines to advance their constituents’ interests on the political front.

With that said, while these efforts are effective, beyond this mention, they are not the subject matter of this particular blog.

This blog is about whether the community bank individually or members of its board of directors should be active in politics, and, if so, what that involvement should look like and how it should work.

Where to draw the line

I believe the initial way to analyze the issue is to identify the difference between:

• Being active in politics and advocating for your community bank, and

• Being “obnoxious” in politics to the extent that your “advocacy” for the bank (i.e., yourself) goes to such an extreme that it causes reputational risks to the bank.

I was recently with a larger community bank with north of $1 billion in total assets. The board of directors had hired me to facilitate a planning session.

At the end of the session, one of the directors indicated that he wanted to talk about what the bank was going to do to support the communities in which the bank operates and serves from an economic and entrepreneurial business generation standpoint.

The primary component of this discussion was how bank personnel were going to get involved with the various government entities in the community. Overall, this was a very positive conversation. While there was no specific resolution, the discussion itself and the actions agreed upon certainly established a strategy to move forward and to better the bank’s communities through political activity.

Unfortunately, not all community banks deal with this issue so appropriately. I have had quite the opposite experience from the positive one I just outlined.

I remember a bank where one of the board members was actively running for a county office. His candidacy was not without controversy.

During his run, at the low point for the bank, he ran an obnoxious op-ed piece in a local newspaper. That article alone probably cost the bank more business than he could have ever generated through his contacts as a political operative in the county.

Needless to say, the reputational risk of his political agenda and “advocacy” were significant. In that situation, my advice was that the chairman tamp this thing down—and tamp it down soon.

As is the case with any of us, a community bank’s reputation is hard to build … and quick and easy to lose.

Does advocacy fit your strategic plan?

Politics is, by definition, a controversial area for any group or organization. It can have both its good points and its bad points. People are passionate on both sides of the table, regardless of the issue that is being advocated.

The important thing to remember, however, is that political advocacy at the individual bank or on the individual director or officer level must be consistent with the bank’s long-term strategic plan. It is incumbent on the board of directors and management to keep a wide eye on the potential reputational risks to the bank as a result of the political involvement.

Any one of us could probably name a recent situation where a company took a political stance that received praise and accolades from one side and vehement opposition from the other.

Remember that when an institution takes a side, its constituency may be split on the issue.

Here are some questions to ask:

1. Does the bank’s board of directors intend to strongly support a specific candidate in a local, state, or national campaign?

2. Would support of that political agenda please a few of the bank’s customer while ostracizing some others?

3. Would it limit the bank’s ability to expand into different localities simply due to a developed political reputation?

This is just one example, but it highlights issues boards of directors must consider when engaging in the political arena.

Everyone is entitled to his or her opinion, but that does not mean that the bank should necessarily be roped into the discussion.

’Tis the season, but with forethought

Lest there be any confusion, please know that I am advocating that our community banks get “plenty involved” in the political system and appropriate political issues.

Political involvement and advocacy are critical. The directors and officers of the bank, however, must do it with eyes wide open to the reputational risks to the bank if things get a little bit off the rails.

And let’s be honest, going off the rails is becoming the new normal in politics.

More in this category: « 5 recruitment and retention tips Variation on employee ownership theme »
back to top