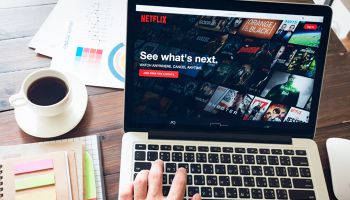 Netflix, now a worldwide, public company devoted to entertainment, began with an envelope and a second-hand DVD. But things really engaged when Blockbuster laughed.

Staffers from a fledgling video rental company were enjoying a corporate retreat in California when a potential buyer called. After months of ignoring the startup’s requests for a meeting, the comparative giant said it wanted to talk.

The next morning. In Dallas.

That meant that the startup’s CEO found himself, with nothing in his bag but a t-shirt, shorts, and flip flops, on a hastily arranged private plane. He and his team had had no time to prepare.

But the hoped-for had come. Blockbuster Entertainment was going to discuss acquiring itty-bitty Netflix. The leadership of Netflix felt it had gone as far as they could on their own, and hoped their concept of selling and renting videos by mail would be snapped up by one of America’s leading video stores—with a nice payday.

The team trooped into Blockbuster’s headquarters in the Renaissance Tower in Dallas. The Californians, in retreat wear, faced Blockbuster’s team in expensive suits and ties.

“How much do you want?” is what the meeting came down to.

Netflix uttered a price. And Blockbuster’s representatives fought to hold in their laughter.

No deal, no sale.

As they returned to their rented plane, the team’s leader, CEO and co-founder Marc Randolph, told his people:

Disruption begins with a mission

When speakers and analysts talk about disruption in banking, they often point to how Netflix in time ate Blockbuster’s lunch—in fact, all of its meals—with the video chain filing bankruptcy in 2010.

What typically isn’t spoken of is the long journey between that bad day in Dallas and Netflix’ victory.

“It took us ten years,” Randolph told bankers at the American Bankers Association’s National Conference For Community Bankers. One of the key lessons Randolph learned is the risks of complacency. Or, as he put it to the bankers:

“If you don’t disrupt yourself, someone will come along and disrupt things for you.”

He also noted, as he began to tell the story of Netflix, that hearing about the taking down of a “market-leading behemoth” is inspiring. However, he added:

“It’s not so inspiring if you are the market-leading behemoth.”

Many bankers aspire to be innovators. Very understandable when one sees the stories of innovators who won big. But bankers might ask themselves some questions prompted by Randolph’s presentation:

1. Can I find ideas where others have found nothing?

2. Can I work past somebody whose opinion I respect telling me my idea stinks?

4. Could I kill my most profitable business line today in favor of concentrating on what I believe will be tomorrow’s winner?

6. Can I completely revamp an idea to come up with a better design?

Randolph has been involved with the formation of seven companies, including Netflix. He says brilliance has little do with finding winning ideas. He says people who had Bs and Cs have sometimes enjoyed the greatest success in founding new ventures.

In fact, in spite of the advantage of geographic synergy, Randolph said that location has little to do with innovation.

“You don’t have to be in Silicon Valley,” he insisted. “Innovation can be found anywhere.”

By that, he explained, one who would innovate must see the world as an imperfect place waiting for improvements. Once this way of looking at things is mastered, he said, “ideas will flow from your head all the time.”

Not all of them will be good ideas.

“Ideas rarely spring out of thin air in a flash,” said Randolph. “And Netflix was found buried in a big pile of bad ideas.”

Moving ahead when others say no

During the heyday of Blockbuster and other video stores, viewing videos for pay was in many ways like privatizing a library. The idea of heading down to the local independent or chain video store, hoping a copy of your choice was available, waiting on a line, renting a VHS tape, heading home, and returning the tape on time and rewound—or paying a fine—all that was considered normal.

In this day of streaming video, it seems incurably cumbersome.

But initially the innovation of Netflix was this. People would choose their movie online, and a DVD would be mailed, with a return envelope. Netflix also sold DVDs. The main appeal was that the Postal Service would do the fetching and carrying.

“When I told my wife about what became Netflix,” said Randolph, “she thought it was the stupidest thing she’d ever heard.”

We can all succumb to the opinions of people we love or respect. But Randolph advised listeners to recall a saying by screenwriter William Goldman, who wrote “The Princess Bride,” among other films.

“Nobody knows anything,” Goldman said.

The writer’s meaning: Even in Hollywood, full of experienced moviemakers, no one but the audience knew which film would fly and which would flop. Talent, budget, and more might be in abundance or barely there.

Ultimately, what counts is only what the audience thinks.

More than one banking innovator interviewed by Banking Exchange has spoken of the need to operate in “fast fail” mode. The idea is, try small steps, see what works and what doesn’t. Adjust, repeat, and regroup. It’s all about the iteration.

This saves time and costs—and keeps the lessons coming.

For Netflix, the initial test ran for 24 hours and cost a couple of dollars.

Randolph said he and his co-founder, Reed Hastings, bought a used DVD at a video store, an envelope at a stationery store, and some postage. Hastings popped the self-addressed envelope into a mailbox. (Hastings continues as CEO today. Randolph retired from Netflix in 2004 and has since been an angel investor and mentor in many situations.)

The idea? To see if a DVD could survive the Postal Service in relatively slim packaging. The envelope arrived, and the DVD was undamaged. Thus began what became the original Netflix.

“Go for it, try it, test it,” said Randolph. “It’s not about having good ideas. It’s about coming up with a system for trying out lots of bad ones.”

An old joke tells of a woman who had two chickens. One chicken fell ill. The woman knew there was only one sure cure—chicken soup! So, she butchered the chicken that was well to nurse the sick one back to health.

Randolph’s team faced a much tougher challenge, along the way, than making chicken soup. The company had launched with dual roles, both selling and renting DVDs. And the vast majority of its revenue was coming from sales.

Good news, but also not so good news.

“We realized that selling DVDs by mail was going to become a commodity business,” said Randolph. Long term, that meant the company as structured wasn’t going to succeed, even though revenue was then strong.

Netflix’ management made a pivotal decision. Convinced that rental’s performance was lagging sales because the process still had rough spots, Netflix decided it could do one function or the other well.

So it dropped the high-revenue sales operation.

“We bet everything on getting rental right,” said Randolph.

A gutsy move, and one that made a difference.

“When you walk away from 99% of your income,” said Randolph, “it focuses your mind wonderfully.”

Ultimately, one of the key factors to making rental take off was simplifying the company’s fee schedule. In 1999, Netflix moved to a system of flat monthly fees, turning a rental business into a subscription business.

Today, for between $7.99 and $11.99, depending on the level of service selected, unlimited viewing is permitted on the Netflix streaming service. (DVDs continue to be part of the Netflix plan as well, as part of the subscription service. Part of the reasoning is that some areas lack sufficient broadband service to make streaming practical.)

Today Netflix says that it has 93 million members in over 190 countries watching more than 125 million hours of TV shows and movies daily. The company produces some of its own movies and TV shows and has negotiated exclusives with some stars and directors.

“Everyone who has ever taken a shower has an idea. It's the person who gets out of the shower, dries off, and does something about it who makes a difference."