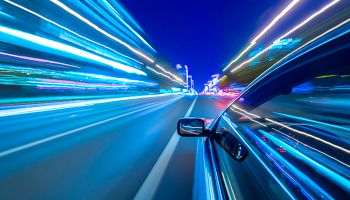 While some bank buyers have run into very public stumbling blocks that have delayed their deals, the average time it takes to close an acquisition is actually shortening.

Average deal closure times have fallen in recent years and are within striking distance of their pre-crisis lows. Investment bankers say the trend is a reflection of the preparation buyers and sellers do ahead of an announcement, which can include discussing options with regulators and looking for signs of approval or disapproval.

Preparation ahead of a deal announcement goes a long way toward guiding realistic expected closing times and keeping the deals on track, investment bankers say.

Christopher Olsen, managing director at investment bank Olsen Palmer, has a banking client who recently provided its regulator with an outline of a general acquisition in an attempt to receive prompt approval when the deal is formally announced. He said regulators do not provide feedback until the formal merger application is submitted but may make general observations about the bank's condition, recent exams and business plans, or ask a potential buyer questions about areas where they might have concerns.

That could account for the gap in deal closing times for banks above and below $1 billion in assets. For larger buyers, the declining closure times may reflect the work that serial acquirers have done to prepare detailed acquisition blueprints for regulators; Olsen said this approach allows institutions a chance to pre-vet their strategy. 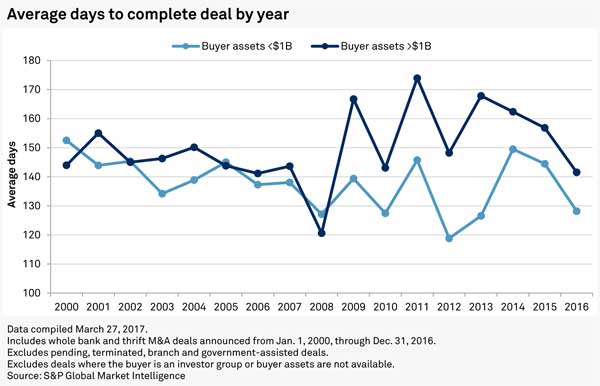 Sellers also do their own due diligence with regulators when entertaining interest from multiple buyers, said Michael Renninger, principal at Renninger & Associates, an investment bank focused on community institutions.

Renninger said sellers sometimes meet with regulators after receiving letters of intent but before signing the definitive agreement, and will hint about potential buyers to gauge their acceptability. Performing the due diligence with regulators before the definitive agreement is important because that is the stage when a seller eliminates multiple bidders to focus on one partner.

"We've been given an indication of the acceptability of various buyers [but] not with any great definitiveness. [Regulators] don't want to tell you who to pick, but … you get a pretty strong sense of which application would be better received," he said. "As a seller, the last thing we want to do is announce a sale to an organization that is going to have difficulty getting approval, so we pay attention."

He said buyers and sellers interfacing separately with regulators saves them the potential embarrassment of announcing a deal that may not receive approval or may face multiple delays on its path toward completion.

But even as deal closure times are technically shortening, it may not feel like the process is speeding up. There have been very public examples of buyers incurring consent orders after announcing deals, and the industry is very aware of how long those orders can delay a close, plus there is a sense that regulations overall have been increasing.

Some banks have decided to terminate their deals rather than face prolonged regulatory uncertainty dragging them out, including the recent termination between United Roosevelt MHC and Wawel Bank (MHC) and the larger agreement between New York Community Bancorp Inc. and Astoria Financial Corp. 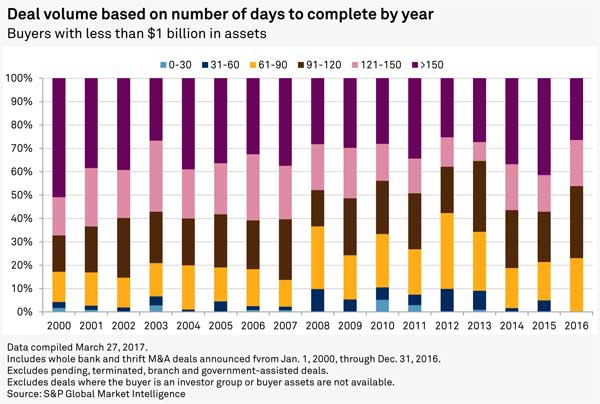 "There are a number of recent examples where regulators certainly dug into the review process, maybe more than they would have previously, and presumably it takes longer," Olsen said. "There have been a number of institutions who haven't done a deal in a few years or haven't had a full exhaustive exam, and through the application process of a deal, the regulators have unearthed quite a few problems."

Going forward, the average amount of time for a deal to close could continue to fall or stabilize around its lower levels. 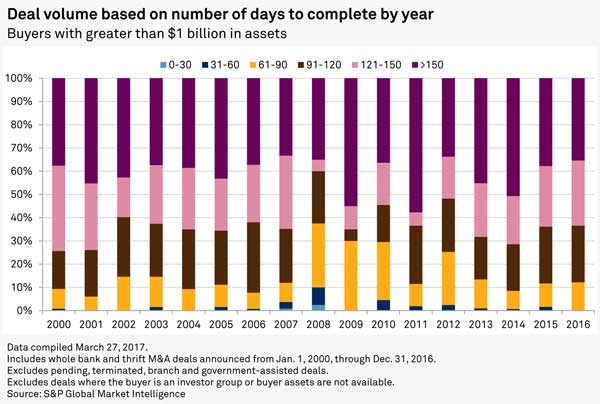