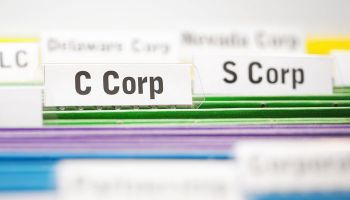 A hard-fought part of the battle over tax reform in Congress concerned "pass-through" entities, which make up a growing portion of the U.S. banking industry.

The combined version of the House and Senate tax bills, which has been passed in both chambers [and signed by President Trump on Dec. 22], includes a 20% tax deduction on pass-through income earned as shareholders or owners of partnerships, S-corps, and sole proprietorships.

Industry groups had called for the tax bill to offer some sort of break for pass-through entities so they would not be left out of tax relief that the bill would give to corporations.

The Independent Community Banks of America applauded the finalized version of the bill in a Dec. 15 comment. "ICBA particularly appreciates the improvements to provisions on Subchapter S community banks and other pass-through businesses, lowering the effective tax rate for these small businesses."

The combined version of the bill includes a provision that the stock of pass-through companies held in trusts be eligible for the deduction, an amendment that had been urged by the ICBA.

In addition to the subchapter S provisions, the ICBA also praised the final versions of the business interest expense deduction provisions; the preservation of laws on non-qualified deferred compensation and mortgage-servicing assets; and the continued mortgage interest deduction, though it has been lowered to a cap of $750,000 from $1.0 million.

Both industry groups also mentioned in their statements the need for Congress to end the tax-exempt status of credit unions and the tax-advantaged status of the Farm Credit System.

S-corps in the banking industry

More than one third of U.S. banks elect to be treated as S corporations, a subset of pass-through entities commonly called S-corps. S corporations pass corporate income, losses, and deductions and credits through to their shareholders, of which there can be no more than 100.

S-corp banks tend to be slightly smaller than C-corp banks. Based on Sept. 30, 2017, call report data, the median size of an S-corp bank was $153.0 million compared to a median of $257.9 million for C-corp and other types of banks.

S-corps make up an increasing portion of the banking industry. At the end of 2005, about a quarter of U.S. banks elected subchapter S status. That had risen to 34% as of the end of September 2017. 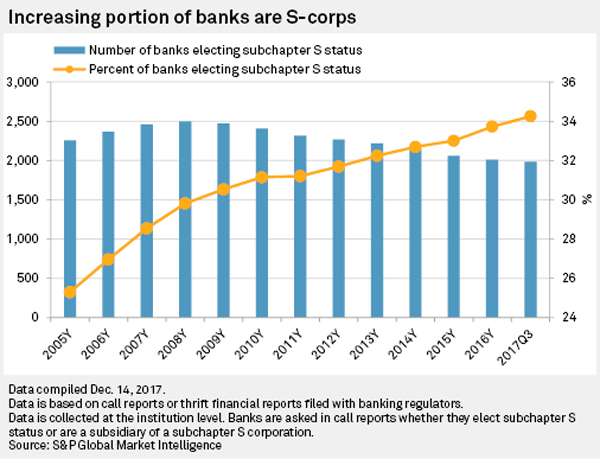 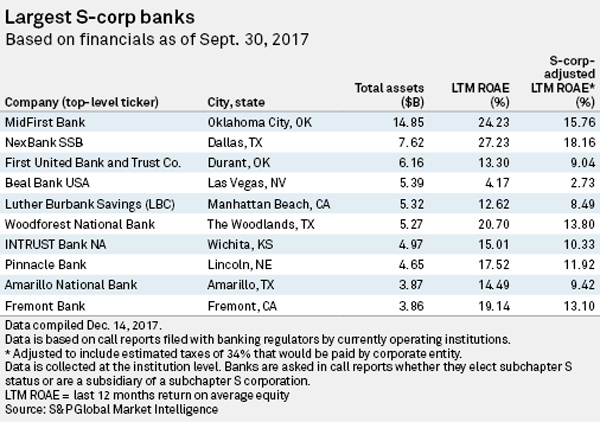 This article originally appeared on S&P Global Market Intelligence’s website on Dec. 20, 2017, under the title, "S-corps, winners in tax bill, make up increasing portion of US banks"