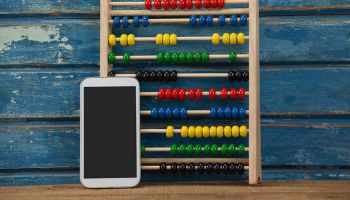 Sometimes major growth means upgrading from old approaches and older concepts. Jeff Gerrish recently helped a community bank planning a major growth initiative to weigh what would have to change.

I was recently with a board of directors of a high-performing community bank when one of the officers began to tell me about one of the bank’s prior projects entitled, “Updating the Abacus.”

That really hit home with me, particularly as it relates to this bank, which is planning on moving up a notch on the food chain from $1 billion to $2 billion or so.

Updating the abacus is an understatement—but it is also an appropriate statement.

What the “abacus” needs

I began to discuss the bank’s growth goals, and all of the issues that go along with it, with the directors and the management team. It became clear that in order to get to that “next level” of a couple of billion dollars in total assets, the bank really needed to update its policies and procedures, operations, technology, human resources processes, staffing levels, organizational structure, and the like.

Credit, funding, and more. The human resources issues alone are the operational equivalent of running a smaller bank. This particular institution will likely need 15 or more lenders just to facilitate the growth.

That does not include the additional human capital that will be needed to bring in deposits to fund the loan growth. The bank will also need to take into account whether the current middle management structure can absorb the additional personnel, or whether additional members of management will need to be added on.

While they are at it, they will also need to make sure that any new hires are capable of performing at the level of a $2 billion community bank.

Tech and security. Of course the discussion included issues associated with technology and security implications of adding so many additional points of entry into the bank’s internal systems.

And while we are on the topic of technology, the bank also has to consider whether its existing technology can interface with its current (and future) products and services and deliver them to the appropriate clients in an efficient and secure manner.

Once you have all of those issues nailed own, how then do you market the bank to the public in order to grow and utilize the additional resources?

Like I said, “updating the abacus” is an understatement.

Now, about that abacus

The first question that has to be asked after discussing this plethora of issues is, “Are you willing to do that?”

It is not uncommon to have very lofty goals that are completely unrealistic in light of the work you are actually willing to put in to accomplish them.

Second question: Does the institution have the capacity and human resources to get started?

In this case, the group answered both questions in the affirmative. All issues having been discussed, the group went around the table and agreed that doubling the bank’s size over a five-year period was the strategic goal. There were some naysayers, but I promptly reminded them that I have seen many banks grow from $1 billion in total assets to the $2 billion range very successfully.

Decisions before you start

If your institution has an aggressive growth strategy, the first thing the board needs to determine is whether the bank will remain independent over the long-term. (This is subject, of course, to the unsolicited “Godfather offer” that the board can simply not refuse.)

Once that decision is made, it is really a no-brainer, at least in my opinion, that the bank will have to sacrifice current earnings for the long-term financial benefit realized by the growth. Still, that issue needs to be presented to and analyzed by the board.

With any type of growth strategy, there is often a J curve where the bank’s earnings decline only to subsequently rise back up. It is a good idea to have parameters for what the curve should look like on the front-end. If it is too dramatic of a downward curve on the front-end, then nobody is going to want to do it.

All of this relates to the board’s “squeal factor” as it relates to earnings versus long-term value via growth.

Enhancing shareholder value always has to be the focus. Sure, you may be able to double the size of the loan portfolio and increase profitability dramatically on paper, but is it really worth an additional 15 to 20 employees and all the operational costs to get there?

Those things need to be the focus of the board.

My advice here is to always set up a stock repurchase plan at the company level (both a proactive plan where the board allocates a certain amount of capital towards repurchases, and a walk-in plan where the company reacts to shareholders wanting to sell their stock) anytime there is this kind of significant strategy adopted.

Strategic issues need to be thoroughly vetted by the board and management team. Only then can they make an informed decision, and only once a decision is made can execution be carried out well. If the strategic issues are squishy or undetermined, then the execution is virtually impossible.

This bank mentioned above fully discussed and determined its strategic direction, and as a result, it is now in a place where it can begin to execute.

More in this category: « Should board members have “skin in the game”? Queries persist on Sub S for banks »
back to top